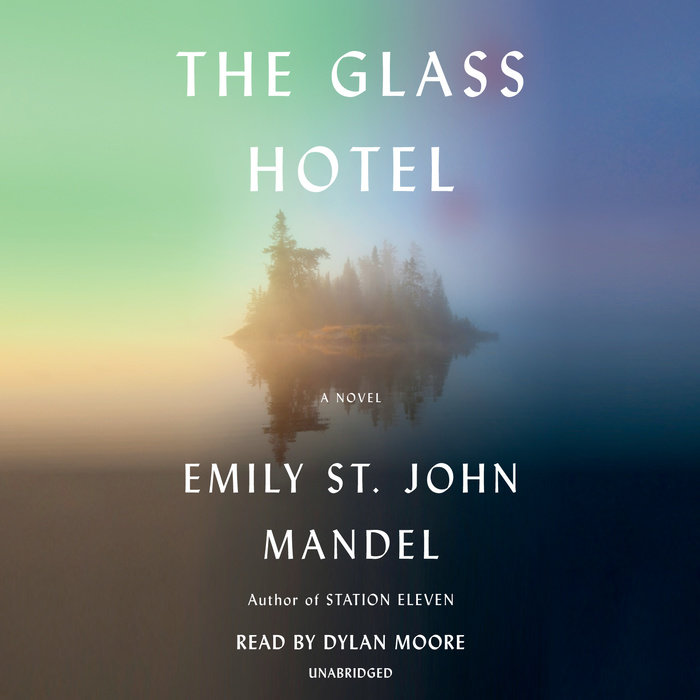 LONGLISTED FOR THE GILLER PRIZE

"The Glass Hotel may be the perfect novel for your survival bunker."
--Ron Charles, The Washington Post

From the award-winning author of Station Eleven, an exhilarating novel set at the glittering intersection of two seemingly disparate events-a massive Ponzi scheme collapse and the mysterious disappearance of a woman from a ship at sea.

Vincent is a bartender at the Hotel Caiette, a five-star lodging on the northernmost tip of Vancouver Island. On the night she meets Jonathan Alkaitis, a hooded figure scrawls a message on the lobby's glass wall: "Why don't you swallow broken glass." High above Manhattan, a greater crime is committed: Alkaitis is running an international Ponzi scheme, moving imaginary sums of money through clients' accounts. When the financial empire collapses, it obliterates countless fortunes and devastates lives. Vincent, who had been posing as Jonathan's wife, walks away into the night. Years later, a victim of the fraud is hired to investigate a strange occurrence: a woman has seemingly vanished from the deck of a container ship between ports of call.

In this captivating story of crisis and survival, Emily St. John Mandel takes readers through often hidden landscapes: campgrounds for the near-homeless, underground electronica clubs, the business of international shipping, service in luxury hotels, and life in a federal prison. Rife with unexpected beauty, The Glass Hotel is a captivating portrait of greed and guilt, love and delusion, ghosts and unintended consequences, and the infinite ways we search for meaning in our lives.
Read More
"The question of what is real—be it love, money, place or memory—has always been at the heart of Ms. Mandel’s fiction... her narratives snake their way across treacherous, shifting terrain. Certainties are blurred, truth becomes malleable and in The Glass Hotel the con man thrives... Lyrical, hypnotic images... suspend us in a kind of hallucinatory present where every detail is sharply defined yet queasily unreliable. A sense of unease thickens... Ms. Mandel invites us to observe her characters from a distance even as we enter their lives, a feat she achieves with remarkable skill. And if the result is a sense not only of detachment but also of desolation, then maybe that’s the point." —Anna Mundow, Wall Street Journal

“A striking book that's every bit as powerful — and timely — as its predecessor… In Vincent and Paul, Mandel has created two of the most memorable characters in recent American fiction… Mandel's writing shines throughout the book, just as it did in Station Eleven. She's not a showy writer, but an unerringly graceful one, and she treats her characters with compassion but not pity. The Glass Hotel is a masterpiece, just as good — if not better — than its predecessor. It's a stunning look at how people react to disasters, both small and large, and the temptation that some have to give up when faced with tragedy.” —Michael Shaub, NPR

"Mandel’s gift is to weave realism out of extremity. She plants her flag where the ordinary and the astonishing meet, where everyday people pause to wonder how, exactly, it came to this. She is our bard of waking up in the wrong time line... One effect of Mandel’s book is to underscore the seemingly infinite paths a person might travel... There is a suggestion, toward the end of The Glass Hotel, that frequent commerce with the dead (or the imaginary) might reconnect us to the living... Perhaps it is with this in mind that Mandel has constructed a fantasy for our temporary habitation. Her story offers escape, but the kind that depends on and is inseparable from the world beyond it."—Katy Waldman, The New Yorker

"[This] novel [is] so absorbing, so fully realized that it draws you out of your own constricted situation and expands your sense of possibilities. For me, over the past 10 days or so, the novel that's performed that act of deliverance... it's "straight" literary fiction, gorgeous and haunting, about the porous boundaries between past and present, the rich and the poor, and the realms of the living and the dead... This all-encompassing awareness of the mutability of life grows more pronounced as The Glass Hotel reaches its eerie sea change of an ending. In dramatizing so ingeniously how precarious and changeable everything is, Mandel's novel is topical in a way she couldn't have foreseen when she was writing it."—Maureen Corrigan, Fresh Air

“A wondrously entertaining novel… The Glass Hotel is never dull. Tracing the permutations of its characters’ lives, from depressing apartments in bad neighborhoods to posh Dubai resorts to Manhattan bars, Colorado campgrounds, and the Edinburgh Fringe Festival is like following the intricate patterns on Moroccan tiles. The pleasure, which in the case of The Glass Hotel is abundant, lies in the patterns themselves… This is a type of art that closely approximates life, and a remarkable accomplishment for Mandel… This novel invites you to inhabit it without striving or urging; it’s a place to be, always fiction’s most welcome effect.”—Laura Miller, Slate

"The Glass Hotel may be the perfect novel for your survival bunker... Freshly mysterious... Mandel is a consummate, almost profligate world builder. One superbly developed setting gives way to the next, as her attention winds from character to character, resting long enough to explore the peculiar mechanics of each life before slipping over to the next... That Mandel manages to cover so much, so deeply is the abiding mystery of this book. The 300 pages of The Glass Hotel work harder than most 600-page novels... The disappointment of leaving one story is immediately quelled by our fascination in the next... The complex, troubled people who inhabit Mandel’s novel are vexed and haunted by their failings, driven to create ever more pleasant reflections of themselves in the glass."—Ron Charles, The Washington Post

"An eerie, compelling follow-up... not your grandmother’s Agatha Christie murder mystery or haunted hotel ghost story... The novel’s ongoing sense of haunting extends well beyond its ghosts... The ghosts in  The Glass Hotel are directly connected to its secrets and scandals, which mirror those of our time... Like all Mandel’s novels, The Glass Hotel is flawlessly constructed... The Glass Hotel declares the world to be as bleak as it is beautiful, just like this novel."—Rebecca Steinitz, The Boston Globe


"Emily St. John Mandel’s storytelling stretches to see into as many windows as possible. Peer closely: characters move between windows, themes reflect and refract... These are not novels weighted by philosophical debates, however, but stories buoyed by serious concerns; Mandel is as dedicated to plotting as she is to characterization... Characters are linked in unexpected directions, within and between books. It’s a joy to pull at the threads and follow their knots and loops.,, And despite all the glass, there is more conflict than clarity. This makes for compulsively readable novels, carefully crafted page-turners. Don’t just say you’ll visit someday. Call ahead. Make a reservation. Check out the view from The Glass Hotel. Enjoy your stay.”—Marcie McCauley, Chicago Review of Books

“An ephemeral quality permeates the novel… It’s a thrill when the puzzle pieces start to fit together… The final chapter is haunting, taking readers full circle… It’s a sense readers will enjoy as well when they lose themselves in Mandel’s novel.”
—Rob Merrill, Associated Press

“Emily St. John Mandel has a knack for explosive openings… Mandel is constructing a sort of multiverse that demonstrates the power of fiction to imagine simultaneous realities.”
—Josephine Livingstone, The New Republic

"Mandel’s crystal ball and uncanny sense of timing remain intact, with a novel of economic collapse, predatory financial figures and widespread corruption... Simply stunning, a boldly experimental work which hooks the reader from its first pages, wending to a powerfully emotional conclusion... The Glass Hotel is a compulsive read, a commercial crowd-pleaser which will, undoubtedly, find a wide audience. It is also a consummate literary novel, courageous and exciting at a structural level. Books that hit the sweet spot like that are rare to find; we should savour them when we can.—Robert J. Wiersema, The Toronto Star

"The novel proceeds via a series of vignettes set at various points between 1958 and 2029 and ranging around the globe. They gradually knit themselves into a single story in a way that will remind readers of Jennifer Egan’s A Visit From the Goon Squad... This is a strange, ethereal, and very well-written book, so interesting it might actually take your mind off things for a while."—Marion Winik, Newsday

"Emily St. John Mandel has an uncanny knack for shape... For all the metaphysical ponderings, The Glass Hotel’s most apparent virtue is its breakneck pacing and compulsive readability. It bodes an elegant and fragmented form, one that excellently matches Mandell’s magnificent storytelling. And what more needs to be said about her storytelling? It is nothing short of an insistent and astonishing gift."—Brady Brickner-Wood, Ploughshares

“The Glass Hotel... totally sticks the landing… Mandel’s prose is such a pleasure to read… [I] gave way to real delight in the skill with which Mandel brings together themes that have occupied previous sections of the novel, revisiting earlier characters and incidents from surprising new perspectives in a narrative sleight of hand that recalls what M. Night Shyamalan does in movies such as Unbreakable. Mandel’s conclusion is dazzling.”
—Chris Hewitt, Minneapolis Star Tribune

"Mandel... specializes in fiction that weaves together seemingly unrelated people, places and things. The Glass Hotel... is no exception... Kaleidoscopic... Mandel dissects the surreal division between those who are conscious of ongoing crimes, and those who are unwittingly brought into them... The Glass Hotel... examine[s]  how we respond to chaos after catastrophe."—Annabel Gutterman, Time

"A careful, damning study of the forms of disaster humanity brings down on itself... In a world where rolling disasters fade into one another, it’s a reminder that Mandel wants to lurch us out of the tedium."—Hillary Kelly, Vulture

"The Glass Hotel will haunt you… Mandel delicately illuminates the devastation wreaked on the fraud’s victims while brilliantly teasing out the hairsbreadth moments in which a person can seamlessly slide into moral corruption… The Glass Hotel isn’t so much plot driven as it is coiled—a taut braid of lives undone by Alkaitis’ and others’ grifts… negotiating slippery ethics and questionable compromises, and the liminal space between innocence and treachery.” —Ivy Pochoda, O Magazine

"Deeply imagined, philosophically profound… The Glass Hotel moves forward propulsively, its characters continually on the run… Richly satisfying… The Glass Hotel is ultimately as immersive a reading experience as its predecessor [Station Eleven], finding all the necessary imaginative depth within the more realistic confines of its world… Revolutionary.”—Ruth Franklin, The Atlantic

"Long-anticipated... At its heart, this is a ghost story in which every boundary is blurred, from the moral to the physical... In luminous prose, Mandel shows how easy it is to become caught in a web of unintended consequences and how disastrous it can be when such fragile bonds shatter under pressure. A strange, subtle, and haunting novel. —Kirkus Reviews, starred

"Another tale of wanderers whose fates are interconnected... nail-biting tension... Mandel weaves an intricate spider web of a story... A gorgeously rendered tragedy."—Booklist, starred 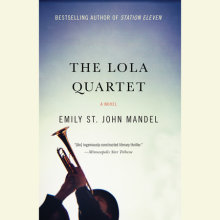 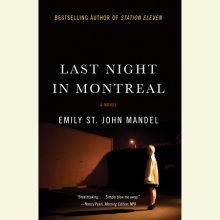 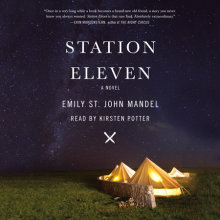