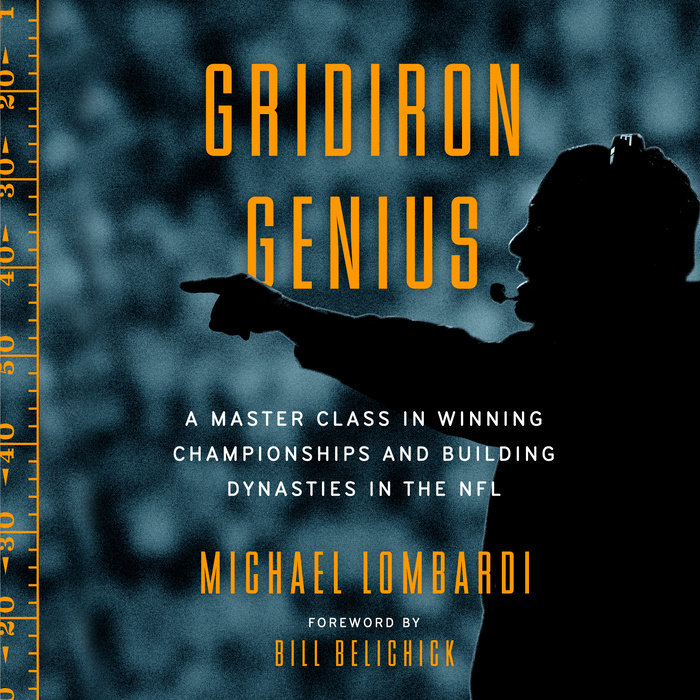 Written by: Michael Lombardi
Read by: Michael Lombardi
Foreword by: Bill Belichick
8 Hours and 31 Minutes Imprint: Random House Audio Genre: Sports & Recreation - Football Release Date: September 11, 2018
Former NFL general manager and three-time Super Bowl winner Michael Lombardi reveals what makes football organizations tick at the championship level. From personnel to practice to game-day decisions that win titles, Lombardi shares what he learned working with coaching legends Bill Walsh of the 49ers, Al Davis of the Raiders, and Bill Belichick of the Patriots, among others, during his three decades in football.

Why do some NFL franchises dominate year after year while others can never crack the code of success? For 30 years Michael Lombardi had a front-row seat and full access as three titans--Bill Walsh, Al Davis, and Bill Belichick--reinvented the game, turning it into a national obsession while piling up Super Bowl trophies. Now, in Gridiron Genius, Lombardi provides the blueprint that makes a successful organization click and win--and the mistakes unsuccessful organizations make that keep them on the losing side time and again.
In reality, very few coaches understand the philosophies, attention to detail, and massive commitment that defined NFL juggernauts like the 49ers and the Patriots. The best organizations are not just employing players, they are building something bigger. Gridiron Genius will explain how the best leaders evaluate, acquire, and utilize personnel in ways other professional minds, football and otherwise, won't even contemplate. How do you know when to trade a player? How do you create a positive atmosphere when everyone is out to maximize his own paycheck? And why is the tight end like the knight on a chessboard?
To some, game planning consists only of designing an attack for the next opponent. But Lombardi explains how the smartest leaders script everything: from an afternoon's special-teams practice to a season's playoff run to a decade-long organizational blueprint. Readers will delight in the Lombardi tour of an NFL weekend, including what really goes on during the game on and off the field and inside the headset. First stop: Belichick's Saturday night staff meeting, where he announces how the game will go the next day. Spoiler alert: He always nails it.
Football dynasties are built through massive attention to detail and unwavering commitment. From how to build a team, to how to watch a game, to understanding the essential qualities of great leaders, Gridiron Genius gives football fans the knowledge to be the smartest person in the room every Sunday.
Read More
"Simply put, Lombardi’s first-person, all access, total insider account of working with three dynastic legends is as good a behind-the-scenes sports book as I’ve ever read." —Jerry Thornton, Barstool Sports

“Fans will immerse themselves in this revealing insider’s glimpse into pro football…His comments on the skills required of NFL head coaches are particularly revealing: x's and o's, sure, but also practical concerns like setting clear guidelines for discipline, making room arrangements on the road, even planning meals and diets. Those who read this informative, eye-opening account will learn much about what makes a great NFL team.” —Booklist

"Gridiron Genius is a FASCINATING read! Michael Lombardi provides a truly unique look at the inside workings and the exacting attention to detail that is paramount to succeed at the highest level. Michael has worked in concert and in lock step with some of the best teachers and administrators in the history of professional football.  He shares true behind-the-scenes glimpses and anecdotes of the behind the scenes world of our industry." —Sean Payton

"Michael Lombardi got his masters in football from The Masters of football - Bill Walsh, Al Davis, Bill Belichick. Now he passes those memorable lessons on to his fortunate readers so they can receive an advanced education in coaching, personnel, management and strategy" —Adam Schefter, ESPN NFL Insider and author of The Man I Never Met

"My only criticism if Michael Lombardi's book is that I enjoyed it too much. The characters and stories were irresistible. But make no mistake, this is a very serious book. Lombardi extracts a meticulous and full-fledged blueprint for organizational excellence from a raft of hard evidence. This is a guidebook for excellence—and it applies way beyond the gridiron. Any thoughtful business leader, for example, could assemble a bundle of useful, integrated ideas that could transform organizational performance. Bravo!" —Tom Peters, author of In Search of Excellence

“As someone who loves the game of football but is also interested in business strategy and leadership, this book was entertaining and useful.” —Inc.

“This is a solid insider look at how NFL teams are made, and is also a useful guide for sports coaches—or office managers—creating their own teams.” —Publishers Weekly
Read More

This is the Author | Mark Cucuzzella, Michael Lombardi, Tom Oâ€™Bryan5 Audiobooks That Score a Touchdown