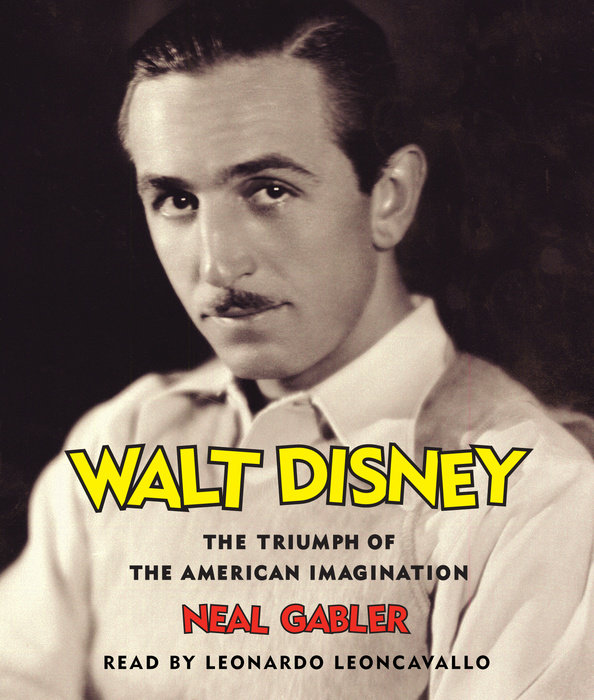 The definitive portrait of one of the most important cultural figures in American history: Walt Disney.

Walt Disney was a true visionary whose desire for escape, iron determination and obsessive perfectionism transformed animation from a novelty to an art form, first with Mickey Mouse and then with his feature films–most notably Snow White, Fantasia, and Bambi. In his superb biography, Neal Gabler shows us how, over the course of two decades, Disney revolutionized the entertainment industry. In a way that was unprecedented and later widely imitated, he built a synergistic empire that combined film, television, theme parks, music, book publishing, and merchandise. Walt Disney is a revelation of both the work and the man–of both the remarkable accomplishment and the hidden life.

Winner of the Los Angeles Times Book Prize for Biography

USA Today Biography of the Year

Read More
“Mesmerizing . . . there’s nothing Mickey Mouse about this terrific biography of Walt Disney (1900-1966), arguably the most influential figure in 20th-century American culture. The research is astonishingly detailed . . . . About this superb biography, one can hardly be temperate. Gabler’s only obvious flaw is also his great strength–the sheer amount of detail and material he presents to the reader. But his engaging, unobtrusive prose, his passion for his workaholic subject (whom he regards as both genius and monster), and his steady march through an amazing career all inspire trust and gratitude. Here, then, is the definitive portrait of Walt Disney, the Dream-King.”
-Michael Dirda, Washington Post Book World (December 3, 2006)

“Masterly . . . . Gabler conveys the limits of Disney’s personal life with sympathy and objectivity. He gives a very careful analysis of the labor strike that changed the mood of the studio irrevocably as well as a nuanced discussion of Disney’s alleged anti-Semitism. By conveying the odds against which Disney struggled, Gabler makes his triumph all the more impressive.”
-Howard Kissel, New York Daily News (November 5, 2006)

“Gabler has put forth the kind of protean epic that Theodore Dreiser or John Dos Passos might have written with their all-encompassing vision, if in a less strident gear. It isn’t just the immense amount of detail Gabler deploys to give density and shadow to Disney, but the frames he uses to contain such detail that brings this biography perilously close to being its own work of art . . . . His previous books . . . ring with pitch-perfect intuitiveness about popular culture buttressed by scrupulous research and judicious tactics.”
-Gene Seymour, Newsday (November 5, 2006)

“[A] tremendously researched and eminently readable biography . . . at once vast and intimate, a skillful act of juggling enormous amounts of fact with equal amounts of rumor, myth, gossip, adultation and hype. Gabler sorts through the contradictions and gives us a coherent image of the man . . .”
--St. Petersburg Times (November 5, 2006)

“A richly detailed, often poignant, psychological profile of a visionary . . . ” —The Baltimore Sun

“Neal Gablers’ Walt Disney: The Triumph of the American Imagination is a standout . . . [Gabler’s} vision of Disney and of Diseny’s vision of America is far more complex and shaded than most other authors’, and far more objective and reliable . . . He is a lively, thoughtful writer, easy to stay with over hundreds of pages . . . one of the most readable, enjoyable, and satisfying books of this year.” —Kansas City Star

“Revealing . . . Fascinating . . . Fans of compelling biographies and of Disney himself will be thrilled to have this in their collection.”
-Library Journal (starred review)

“A revelatory portrait of a visionary . . . Disney examines its subject with a balance of insight, awe and empathy.”
-Pat H. Broeske, Bookpage

“Magnificent . . . an exhaustively researched and beautifully written work that is among the finest biographies I have ever read . . . Speaking of classics, this book is one. It should capture every award worth giving.”
-Cal Thomas, Gwinnett Daily Post

“Gabler has boiled down his years of study brilliantly . . . Walt Disney has been resurrected, not by medics, but by an extremely intrepid author.”
-Entertainment Weekly

“Masterful . . . his book is not simply a recitation of facts. Rather, it offers clear-headed analysis.”
-USA Today

“Every period of Disney’s life is depicted in exacting detail . . . [Gabler’s] portrait is so engrossing that it’s hard to picture the entertainment mogul playing with his toy trains and not imagine him building Disneyland in his head.”
-Publisher’s Weekly (starred review)

“We’ve all been waiting for the perfect book on Walt Disney; it has finally arrived and Neal Gabler’s done it. Wonderful!”
--Ray Bradbury
Read More