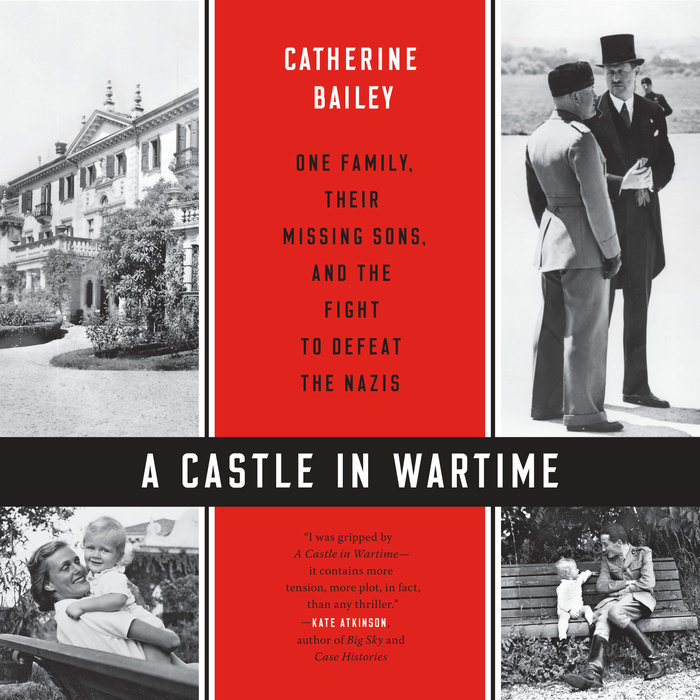 An enthralling story of one family's extraordinary courage and resistance amidst the horrors of war from the New York Times bestselling author of The Secret Rooms.

As war swept across Europe in 1940, the idyllic life of Fey von Hassell seemed a world away from the conflict. The daughter of Ulrich von Hassell, Hitler's Ambassador to Italy, her marriage to Italian aristocrat Detalmo Pirzio-Biroli brought with it a castle and an estate in the north of Italy. Beautiful and privileged, Fey and her two young sons lead a tranquil life undisturbed by the trauma and privations of war. But with Fascism approaching its zenith, Fey's peaceful existence is threatened when Ulrich and Detalmo take the brave and difficult decision to resist the Nazis.

When German soldiers pour over the Italian border, Fey is suddenly marooned in the Nazi-occupied north and unable to communicate with her husband, who has joined the underground anti-Fascist movement in Rome. Before long, SS soldiers have taken up occupancy in the castle. As Fey struggles to maintain an air of warm welcome to her unwanted guests, the clandestine activities of both her father and husband become increasingly brazen and openly rebellious. Darkness descends when Ulrich's foiled plot to kill the Fuhrer brings the Gestapo to Fey's doorstep. It would be months before Detalmo learns that his wife had been arrested and his two young boys seized by the SS.

Suffused with Catherine Bailey's signature atmospheric prose, A Castle in Wartime tells the unforgettable story of the extraordinary bravery and fortitude of one family who collectively and individually sacrificed everything to resist the Nazis from within. Bailey's unprecedented access to stunning first-hand family accounts, along with records from concentration camps and surviving SS files, make this a dazzling and compulsively readable book, opening a view on the cost and consequences of resistance.
Read More
"Bailey’s deep research and her amazing craft at reproducing in vivid detail the stories of von Hassell and the people she encounters...make for chilling prose."—Booklist

“Catherine Bailey has already demonstrated a truly remarkable ability to intertwine searing family histories with great historical events. With A Castle in Wartime she outdoes even herself, with a true story that simultaneously shows huge personal empathy with the fate of two toddler brothers as well as a profound understanding of the pure evil that lurked at the heart of the Third Reich.”—Andrew Roberts, author of Churchill: Walking with Destiny

“An uplifting, exciting story of the extraordinary actions of one family during World War II… [Bailey] relates the entire suspenseful story like a novel. Right to the nail-biting end, this book captures your attention in alternating dread, fear, and hope.”—Kirkus Reviews (*starred review*)

“Remarkable . . . a powerful, engrossing story of a journey into the heart of darkness and final escape from it.”—Sunday Times (U.K.)

“Bailey has an extraordinary ability to penetrate right to the heart of a family and uncover often painful stories. An important book.”—Daily Telegraph (U.K.)

“Bailey has a knack for bringing characters to life . . . Fascinating.”—Times of London (U.K.)

“Bailey has an extraordinary talent for bringing history to life . . . as thrilling as any novel.”—Daily Mail

"This historical page-turner gives a gripping view of the conflict’s consequences for one upper-crust family."—Publishers Weekly

“I was gripped by A Castle in Wartime—it contained more tension, more plot in fact - than any thriller and was written with Bailey’s usual extraordinary clarity and panache. To say that she makes history come alive is such a cliché and yet it's so true, she is absolutely one of my favorite writers.”—Kate Atkinson, author of Big Sky and Case Histories

“One of the most harrowing, beautifully written and brilliantly researched books I have read in a very long time. I was completely absorbed from first page to last, and I enormously admire both Catherine Bailey's dedication to her subject and her expertise in recounting such a complex narrative. She is brilliant at conveying both character and location, and maintains an extraordinary control over every section of the story.”—Selina Hastings, author of The Secret Lives of Somerset Maugham