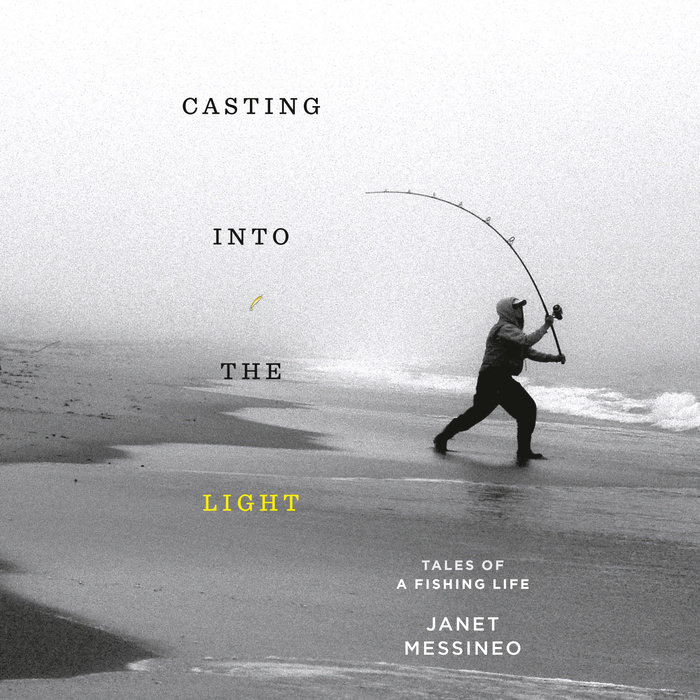 Written by: Janet Messineo
Read by: Janet Messineo
10 Hours and 7 Minutes Imprint: Random House Audio Genre: Sports & Recreation - Fishing Release Date: July 02, 2019
Tales of a champion surfcaster: the education of a young woman hell-bent on following her dream and learning the mysterious and profound sport, and art, of surfcasting, on the island of Martha’s Vineyard.

Janet Messineo knew from the get-go that she wanted to become a great fisherman. She knew she was as capable as any man of catching and landing a huge fish. It took years—and many terrifying nights along on the beach in complete darkness, in search of a huge creature to pull out of the sea—for her to prove to herself and to the male-dominated fishing community that she could make her dream real.

Messineo writes of the object of her obsession: striped bass and how it can take a lifetime to become a proficient striped bass fisherman; of stripers as nocturnal feeders, hard-fighting, clever fish that under the cover of darkness trap bait against jetties or between fields of large boulders near shorelines, or, once hooked, rub their mouths against the rocks to cut the line.

She writes of growing up in Lawrence, Massachusetts, and Salem, New Hampshire, the granddaughter of textile mill workers, tagging along with her father and brother as they cast off of jetties; of going to art school, feeling from a young age the need to escape, and finding herself, one summer, on the Vineyard.

She describes the series of jobs that supported her fishing—waitressing at the Black Dog, Helios, and the Home Port, among other restaurants. She writes of her education in patience and the technique to land a fish; learning the equipment—hooks, sinkers, her first squid jig; buying her first one-ounce Rebel lure.

She re-created the thrill of fishing at night, of being buffeted by the island’s harsh winds and torrential rains; the terror of hooking something mysterious in the darkness that might pull her into water over her head.

She gives us a rich portrait of island life and writes of its history and of Chappaquiddick’s (it belonged to the Wampanoags, who originally called it Cheppiaquidne—“separate island”); of the Martha’s Vineyard Derby: its beginning in 1946 as a way to bring tourism to the island during the offseason, and the Derby’s growing into one of the largest tournaments in the world.

Messineo describes her dream of becoming a marine taxidermist, of learning the craft and perfecting the art of it. She writes of the men she’s fished with and the women who forged the path for others (among them, Lorraine “Tootie” Johnson, who fished Vineyard waters for more than sixty years, and Lori VanDerlaske, who won the Derby shore division in 1995). And she writes of her life commingled with fishing—her marriage to a singer, poet, activist; their adopting a son with Asperger’s; and her teaching him to fish. She writes of the transformative power of fishing that helped her to shake off drugs and alcohol, and of her profound respect for fish as a magnificent animal.

With eighteen of the author’s favorite fish recipes, Casting into the Light is a book about following one’s dreams and about the quiet reckoning with self in the long hours of darkness at the water’s edge, with the sounds of the ocean, the night air, and the jet-black sky.

"One of the chief pleasures of Casting Into the Light is its evocation of a collegial fishing community . . . warm-hearted . . . Messineo is an amiable and entertaining storyteller who--much to her own surprise--has found a sort of bliss."

"A bright thread in the narrative is the sense of a social fabric binding the island at large and fishermen of every gender . . . lucid prose . . . sentences as natural as waves."

“Eloquent . . . a remarkable book by a remarkable Vineyard bass fisherman . . . Janet Messineo’s story is gripping; bright, funny, and illuminating. It has everything . . . more than a fish story, it’s the story of a very remarkable human being, a person who refused to be shoehorned into a category society felt comfortable with and set out instead to create something truly unique—herself.”
—Rob Conery, Cape Cod Times

“Tells it like it is . . . real . . . authentic . . . [Messineo is] a natural storyteller . . . She effortlessly conveys the tangible and intangible elements of surfcasting. Her descriptions of the relentless hope that renews with every cast and drives hard-core fishermen to stay out long after it’s stopped being fun are recognizable to anyone who has fished and enlightening to anyone who has not . . . Vulnerability is rarely on display in the male-dominated surfcasting community. How fitting that after having to prove she belongs despite being a woman, it’s perhaps because she is a woman that she was able to write a memoir that deserves a spot among the best books ever written about surfcasting.”
—Kevin Blinkoff, On the Water Magazine

“Uniquely excellent . . . Sure, it’s about fishing, but that’s just one element in a memoir about [Messineo’s] life inside and outside fishing . . . It’s also a book about overcoming fear. In the early days, Messineo fished alone, often at night, standing in roiling surf in waterlogged waders, all she could afford then. She knew the dangers of the sea and the lives lost to wind and water on the Island. She conveys that feeling of experiencing the power of nature . . . Her book is full of fishing yarns, stories, quirks and superstitions, her own and others’ . . . You can hear her voice on the page. If you don’t know her, you’ll want to . . . This is a great read if you fish, and an equally important book if you don’t.”
—Jack Shea, Martha’s Vineyard Times

"Terrific . . . affecting . . . categorizing this as a fishing book would be doing it a disservice. At its heart, this is a book about renewal. It will fill you with hope."
—Steve Donoghue, The Vineyard Gazette

"How Janet Messineo, through sheer grit, managed to acquire her skills and gain acceptance into the boys' club of master fishermen on Martha's Vineyard reads like a fairytale in which a callow youth overcomes endless obstacles to realize a seemingly impossible dream. But be warned: Once you start reading this gripping and instructive saga, it's hard to put it down."
—Lisa Alther

"Delightful . . . great insight into the existence of professional anglers and the insular culture of Martha's Vineyard . . . Messineo's captivating memoir brings a refreshing mix of vulnerability, accessibility, and joy to the fishing genre."
—Publishers Weekly

"A tackle box full of fishing tips, memories, histories, taxidermy, and even recipes from an angler who found focus and purpose for her life among her fellow fishermen on Martha's Vineyard . . . A chronicle of a life in fishing by an author who seems like good company."
—Kirkus Reviews