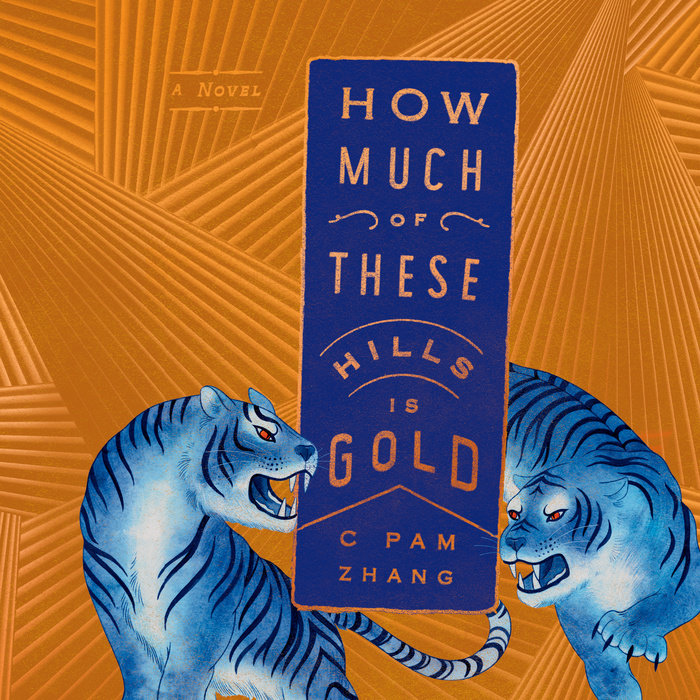 “Belongs on a shelf all of its own.” —NPR

An electric debut novel set against the twilight of the American gold rush, two siblings are on the run in an unforgiving landscape—trying not just to survive but to find a home.

Ba dies in the night; Ma is already gone. Newly orphaned children of immigrants, Lucy and Sam are suddenly alone in a land that refutes their existence. Fleeing the threats of their western mining town, they set off to bury their father in the only way that will set them free from their past. Along the way, they encounter giant buffalo bones, tiger paw prints, and the specters of a ravaged landscape as well as family secrets, sibling rivalry, and glimpses of a different kind of future.

Both epic and intimate, blending Chinese symbolism and reimagined history with fiercely original language and storytelling, How Much of These Hills Is Gold is a haunting adventure story, an unforgettable sibling story, and the announcement of a stunning new voice in literature. On a broad level, it explores race in an expanding country and the question of where immigrants are allowed to belong. But page by page, it’s about the memories that bind and divide families, and the yearning for home.

Read More
Praise for How Much of These Hills Is Gold:

“An aching book, full of myths of Zhang’s making (including tigers that roam the Western hills) as well as joys, as well as sorrows. It’s violent and surprising and musical. Like Lucy and Sam, the novel wanders down byways and takes detours and chances. By journey’s end, you’re enriched and enlightened by the lives you have witnessed.” —The New York Times

“[A] glittering debut . . . This novel is at once a thrilling adventure, a tender coming-of-age story, an excavation of the corrosive mythmaking surrounding the American west, and the arrival of a major literary talent.” —Esquire

“While the book presents a counter-narrative to conventional tales of America’s origins, it also interrogates the more intimate dimensions of belonging and memory, asking, over and over, ‘What makes a home a home?’” —The New Yorker

“Sure to be the boldest debut of the year.” —The Guardian

“A fully immersive epic drama packed with narrative riches and exquisitely crafted prose . . . Zhang captures not only the mesmeric beauty and storied history of America’s sacred landscape, but also the harsh sacrifices countless people were forced to make in hopes of laying claim to its bounty.” —San Francisco Chronicle

“Outstanding . . . Zhang does more than just push against the cowboy narrative: She shoves it clear out of the way. . . . at once subversive and searching”—The Washington Post

“Just as Zhang tinkers with Western tropes, she also plays with language, weaving Chinese phrases with cowboy drawl, merging myths of tigers with fables about where the buffalo roam. Her prose at its best can be heart-stoppingly lyrical.” —USA Today

“How Much of These Hills Is Gold is first and foremost a family story, a gorgeous novel that gives its characters room to learn, mourn, fight, and reinvent themselves. But it also reveals the flaws and false revisions in the American mythos, the ways we have never fully overcome the brutalities on which this country was built, and how much was lost, destroyed, and stolen in the pursuit of profit along the way.” —Chicago Review of Books

“Imaginative, vital . . . Zhang’s searing words pierce the heart of America’s founding mythology, laying bare its lies, and offering up a new, much-needed vision of this country and its people.” —Refinery29

“As she depicts their journey, Zhang prompts the reader to think about whose stories are told from this period of American history—fictional or not—and adds her urgent voice to the genre.” —Time

“A world wrought of breath and blood and imagination.” —Lit Hub

“Stunning . . . a long-overdue treatment of the American West.” —Outside

“Lyrical and mythic, How Much of These Hills Is Gold reconceives the immigrant narrative to tell an original story of racism and American greed.” —The A.V. Club

“C Pam Zhang’s electrifying debut is a sweeping work of historical fiction—the sort of masterpiece that immediately establishes an author as a force to be reckoned with.” —Harper’s Bazaar

“This moving tale of family, gold, and freedom rings with a truth that defies rosy preconceptions. The description of human and environmental degradation is balanced by shining characters who persevere greatly. Highly recommended.” —Library Journal (starred review)

“Aesthetically arresting and a vital contribution to America’s conversation about itself.” —Kirkus Reviews (starred review)

“Daringly original . . . Zhang’s laser-sharp reexamination of America’s myth-laden past is likely to help bring clarity to many issues that continue to challenge us all.” —BookPage (starred review)

“Smart, beautiful, and intimate.” —The Millions

“Ferocious, dark and gleaming, a book erupting out of the interstices between myth and dream, between longing and belonging. How Much of These Hills Is Gold tells us that stories—like people, like the rough and stunning landscape of California itself—are constantly in the process of being made, broken, and finally remade into something tender and new.” —Lauren Groff, The New York Times–bestselling author of Fates and Furies

“A haunting, riveting and truly remarkable debut. Zhang writes with the clear-eyed lucidity of ancient mythmakers whose eyes are attuned to the vicissitudes of nature and humanity.” —Chigozie Obioma, author of Booker Prize finalist An Orchestra of Minorities

“This exhilarating novel unweaves the myths of the American West and offers in their place a gorgeous, broken, soulful, feral song of family and yearning, origin and earth. C Pam Zhang is a brilliant, fearless writer. This book is a wonder.” —Garth Greenwell, author of What Belongs to You

“A ravishingly written revisionist story of the making of the West, C Pam Zhang’s debut is pure gold.” —Emma Donoghue, author of Room

“How Much of These Hills is a miracle, as timely as it is timeless, propulsive but also wonderfully meditative, a ferocious, tender epic about a vulnerable immigrant family trying to survive the American Gold Rush. I read it in one night and know I’ll revisit it soon: I envy you your first read of this book.” —R.O. Kwon, author of The Incendiaries

“The writing here is intuitive, chewy, wonderful; the plot is devastating and the talent is dazzling. Zhang is a blazing writer.” —Daisy Johnson, author of Everything Under
Read More