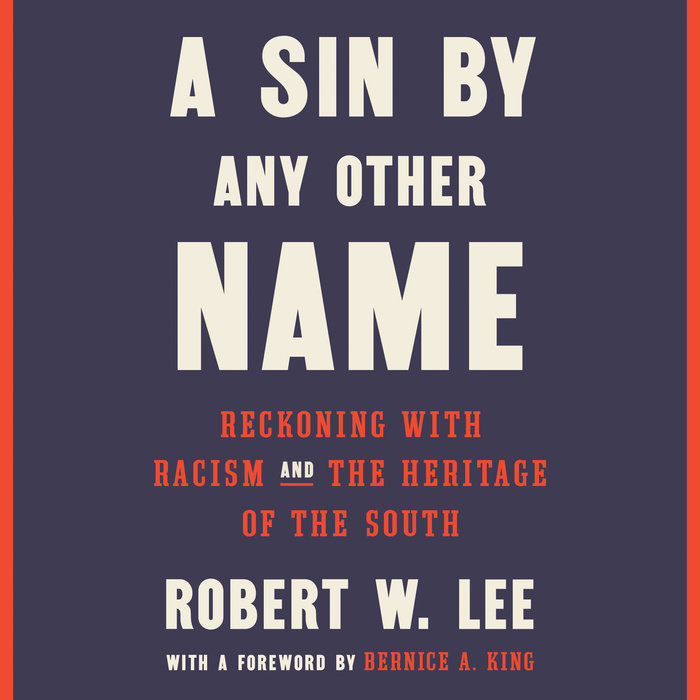 Written by: Robert W. Lee
Read by: Robert W. Lee & January LaVoy
Foreword by: Bernice A. King
4 Hours and 25 Minutes Imprint: Random House Audio Genre: Biography & Autobiography - Personal Memoirs Release Date: April 02, 2019
A descendant of Confederate General Robert E. Lee chronicles his story of growing up with the South's most honored name, and the moments that forced him to confront the privilege, racism, and subversion of human dignity that came with it.

With a foreword by Rev. Dr. Bernice A. King.

The Reverend Robert W. Lee was a little-known pastor at a small church in North Carolina until the Charlottesville protests, when he went public with his denunciation of white supremacy in a captivating speech at the MTV Video Music Awards. Support poured in from around the country, but so did threats of violence from people who opposed the Reverend's message.

In this riveting memoir, he narrates what it was like growing up as a Lee in the South, an experience that was colored by the world of the white Christian majority. He describes the widespread nostalgia for the Lost Cause and his gradual awakening to the unspoken assumptions of white supremacy which had, almost without him knowing it, distorted his values and even his Christian faith. In particular, Lee examines how many white Christians continue to be complicit in a culture of racism and injustice, and how after leaving his pulpit, he was welcomed into a growing movement of activists all across the South who are charting a new course for the region.

A Sin by Any Other Name is a love letter to the South, from the South, by a Lee—and an unforgettable call for change and renewal.
Read More
“In April 1963, my father wrote to the clergy his “Letter from Birmingham Jail.” Now, fifty-five years later, Robert W. Lee IV, a descendant of General Robert E. Lee, has written the love letter to the church and to the South that you now hold in your hands . . . Perhaps for such a time as this, in answer to my father’s prayer, God has raised up Robert W. Lee IV to join the cause of opening ‘the channels of communication between races.’”
—Rev. Dr. Bernice A. King, from the book’s foreword

“A Sin by Any Other Name is the rarest of books—a social justice coming of age memoir. In these pages, young pastor Robert Lee, a descendent of General Robert E Lee, grapples with his family history and invites southerners to finally come of age by facing their own history of racism.”
—Diana Butler Bass, author of Grounded

“One of the best things that happened to me over the last two years was getting to listen to Rev. Rob Lee talk—and not just talk, but share ideas of how we all can do a better as Christians, non-Christians, as human-beings. I think he may be on to something.”
—Whoopi Goldberg

“Lee shares his path to fighting for racial justice in this revealing memoir . . . open minded readers will appreciate Lee’s perspective on race in America as well as his story of working to overcome division, bigotry, and his own family’s fraught history.”
—Publishers Weekly

"A story of transformation and conversion that is as personal as it is public. Grappling with issues of family, religion and politics, Rob Lee shows us how to move towards truth in a graceful way."
—James Martin, SJ, Jesuit priest and author of Jesus: A Pilgrimage

“Robert W. Lee IV’s coming of age story is an impassioned testimony of what it means to grow up with a famous name and realize it’s a curse—unless you find a way to use it for good.”
—Samuel Wells, vicar of St Martin-in-the-Fields, London

“If you're from the South, live in the South, or think of the South as the "real America," you need to read this love letter to the South from Rob Lee, a nephew (generations removed) of Robert E Lee. It is beautifully written, brimming with love, and ready to explode with an urgent message for our times. A Sin by Any Other Name could change the world, and you could be part of the change by reading it now.” —Brian D. McLaren, author of The Great Spiritual Migration

"Rob Lee calls our racist past and present for what it is, from a peculiarly Christian point of view—sin.  In this book Rob helps us to name our sin and to move from confession to reparation, reconciliation, and restoration."
—Will Willimon, professor at Duke Divinity School, author of Who Lynched Willie Earle

“The idols of white supremacy and racism won’t topple over by themselves. But Rev. Robert W. Lee, IV, a descendent of General Robert E. Lee, has been working hard to give them an almighty push off of their pedestals. Rev. Lee has written a “love letter” to his beloved south, urging his fellow white citizens to quit idolizing a harmful past, and challenging them to work together to help construct a more just and equitable racial future.”
—Rev. Dr. Susan Brooks Thistlethwaite, professor of theology and former president, Chicago Theological Seminary
Read More