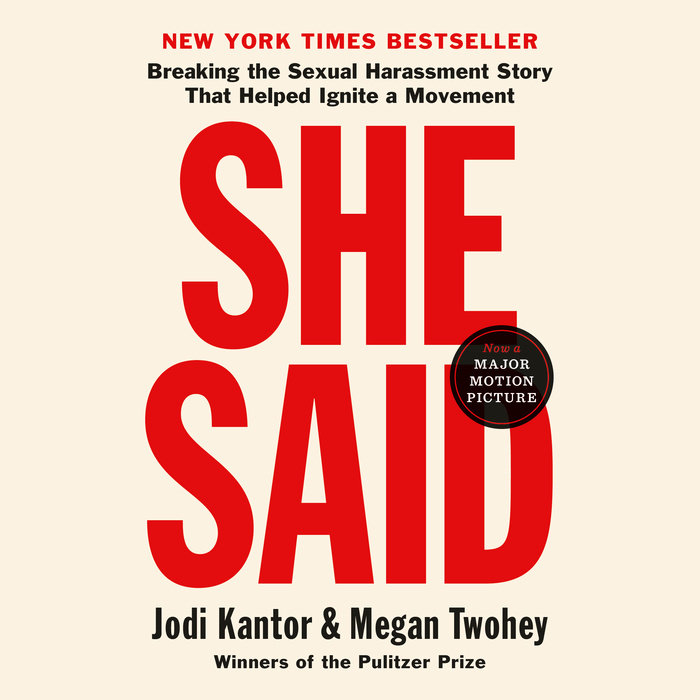 On October 5, 2017, the New York Times published an article by Jodi Kantor and Megan Twohey--and then the world changed. For months Kantor and Twohey had been having confidential discussions with top actresses, former Weinstein employees and other sources, learning of disturbing long-buried allegations, some of which had been covered up by onerous legal settlements. The journalists meticulously picked their way through a web of decades-old secret payouts and nondisclosure agreements, pressed some of the most famous women in the world--and some unknown ones--to risk going on the record, and faced down Weinstein, his team of high-priced defenders, and even his private investigators.

But nothing could have prepared them for what followed the publication of their Weinstein story. Within days, a veritable Pandora's Box of sexual harassment and abuse was opened, and women who had suffered in silence for generations began coming forward, trusting that the world would understand their stories. Over the next twelve months, hundreds of men from every walk of life and industry would be outed for mistreating their colleagues. But did too much change--or not enough? Those questions plunged the two journalists into a new phase of reporting and some of their most startling findings yet.

With superlative detail, insight, and journalistic expertise, Kantor and Twohey take us for the first time into the very heart of this social shift, reliving in real-time what it took to get the story and giving an up-close portrait of the forces that hindered and spurred change. They describe the surprising journeys of those who spoke up--for the sake of other women, for future generations, and for themselves--and so changed us all.

Includes a Bonus PDF of the Notes from the Book
Read More
“A binge-read of a book, propelled, for the most part, by a clear, adrenaline-spiking ticktock of how their stories came together, and studded with all manner of new astonishing details...This is Kantor and Twohey’s story and one everyone should read for a panoply of reasons. By simply recounting their reporting, the two offer a masterful explanation of how a man like Weinstein is allowed to abuse his power and many women for so long in something approaching plain sight…In many ways, “She Said” is more significant than “All the President’s Men,” and not just because journalism is currently under siege, financially and politically, in a way it was not in the 1970s. There was a finite number of people responsible for the crimes of the Nixon administration; the alleged crimes of Harvey Weinstein are also the crimes of our culture, and they continue to be committed every day by many men all around the world. Although now, one hopes, without as much silence, secrecy and cultural complacency.” — Los Angeles Times Review

“'She Said,' a new book detailing the astonishing behind-the-scenes of the New York Times’s bombshell Harvey Weinstein exposé, is an instant classic of investigative journalism. If your jaw dropped at the newspaper’s original allegations against the predatory movie mogul, prepare for it to hit the floor as authors Jodi Kantor and Megan Twohey recount how they uncovered the story: secret meetings, harrowing phone calls, private text exchanges with A-list actresses agonizing over whether to go on the record. Ashley Judd plays the stoic warrior; Gwyneth Paltrow, the circumspect liaison who tries to help the reporters find other sources.” – Monica Hesse, The Washington Post

“She Said, the journalists’ clear-eyed record of that effort, reads at some moments as a thriller, and at others as an indictment of a system full of rot. But it is ultimately about the women, bonded in their pain, who refused to be silent any longer.” – The Atlantic

“‘She Said,’ a chronicle of the #MeToo era by Jodi Kantor and Megan Twohey, reveals the power of women who, together, refused to stay silent.” – The New Republic

“Kantor and Twohey even-handedly assess the impact of the #MeToo movement thus far while also turning a perceptive, hopeful eye on the way forward.” — Esquire

“She Said is the story behind the story that changed the world….Come for the shocking reveals, stay for how the book expertly parses the current moment.”—Refinery29

“‘She Said’ is riveting and, crafted by two of the country's most talented journalists, a vibrant, cinematic read.”— CNN

“Jodi Kantor and Megan Twohey are two names that future generations will read about in history books.” — Mashable

“Kantor and Twohey have crafted their news dispatches into a seamless and suspenseful account of their reportorial journey, a gripping blow-by-blow of how they managed, “working in the blank spaces between the words,” to corroborate allegations that had been chased and abandoned by multiple journalists before them. . . Watching Kantor and Twohey pursue their goal while guarding each other’s back is as exhilarating as watching Megan Rapinoe and Crystal Dunn on the pitch. . . It turns out we did need to hear more about Weinstein — and the “more” that Kantor and Twohey give us draws an important distinction between the trendy ethic of hashtag justice and the disciplined professionalism and institutional heft that actually got the job done.”—Susan Faludi, New York Times Book Review

“An instant classic of investigative journalism. The book is packed with reluctant sources, emotional interviews, clandestine meetings, impatient editors, secret documents, late-night door knocks, toady lawyers and showdowns with Weinstein himself. The cumulative effect is almost cinematic, a sort of “All the President’s Men” for the Me Too era, except the men are women, and they don’t protect the boss, they take him down.”— Carlos Lozada, The Washington Post

“She Said is first and foremost an account of incredible reporting, the kind that takes time, diligence and the kind of institutional support many newspapers can no longer afford. For journalist readers, it is a chance to watch experts at work. And this book is a rare view for nonjournalists into the exacting and rigorous process of quality reporting, and it acts as an implicit counterargument to rising, ambient skepticism of the press. Kantor and Twohey show the background research they ran on sources, to protect both them and the paper, the careful way they documented and substantiated information, and their extraordinary precision in acquiring proof. . . Deeply suspenseful, a kind of less swaggering All the President's Men.”—NPR

“Kantor and Twohey, writing a professional memoir that often reads as a riveting work of true crime, offer damning evidence for what is by now a familiar theme: a legal system that promises blindness and balance—the mechanisms through which truth might be finally determined—and too often comes up short. She Said finds Kantor and Twohey (and the extensive team of editors, lawyers, and fact-checkers who bolster their work) exposing not merely Weinstein, but also the system that kept him, at the expense of so many others, safe... So while there is triumph in She Said—the book is a tale of investigative reporting’s power to nudge the world out of its complacencies—there is also a sense of necessary open-endedness... The journalist offers the evidence; it is for the rest of us to decide what the justice looks like.”—The Atlantic

“Kantor and Twohey are godsends…their reporting and their commitment were pivotal in the #MeToo movement, and this history is flush with gratitude for the women who trusted them with their stories.” – The Oregonian 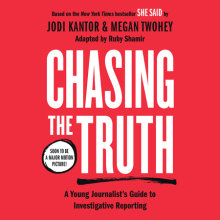