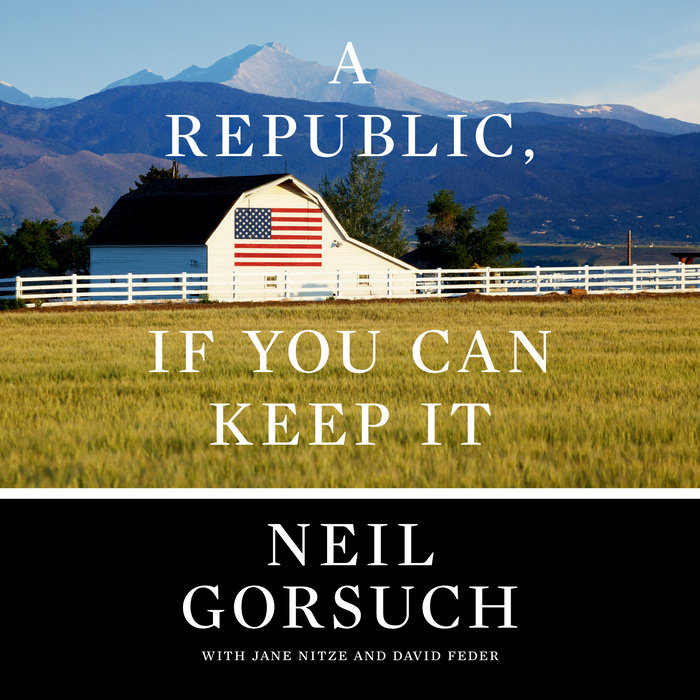 Written by: Neil Gorsuch
Read by: Neil Gorsuch
11 Hours and 52 Minutes Imprint: Random House Audio Genre: Biography & Autobiography - Lawyers & Judges Release Date: September 10, 2019
NEW YORK TIMES BESTSELLER • Justice Neil Gorsuch reflects on his journey to the Supreme Court, the role of the judge under our Constitution, and the vital responsibility of each American to keep our republic strong.

As Benjamin Franklin left the Constitutional Convention, he was reportedly asked what kind of government the founders would propose. He replied, “A republic, if you can keep it.” In this book, Justice Neil Gorsuch shares personal reflections, speeches, and essays that focus on the remarkable gift the framers left us in the Constitution.

Justice Gorsuch draws on his thirty-year career as a lawyer, teacher, judge, and justice to explore essential aspects our Constitution, its separation of powers, and the liberties it is designed to protect. He discusses the role of the judge in our constitutional order, and why he believes that originalism and textualism are the surest guides to interpreting our nation’s founding documents and protecting our freedoms. He explains, too, the importance of affordable access to the courts in realizing the promise of equal justice under law—while highlighting some of the challenges we face on this front today.

Along the way, Justice Gorsuch reveals some of the events that have shaped his life and outlook, from his upbringing in Colorado to his Supreme Court confirmation process. And he emphasizes the pivotal roles of civic education, civil discourse, and mutual respect in maintaining a healthy republic.

A Republic, If You Can Keep It offers compelling insights into Justice Gorsuch’s faith in America and its founding documents, his thoughts on our Constitution’s design and the judge’s place within it, and his beliefs about the responsibility each of us shares to sustain our distinctive republic of, by, and for “We the People.”
Read More
“Every American should read this book—especially those who think they disagree with Justice Gorsuch. . . . Whether readers end up agreeing or disagreeing with Justice Gorsuch’s ideas, our republic will be richer for readers having considered them.”—U.S. Circuit Judge Amul Thapar

“Justice Gorsuch has written a temperate book, with civility shown to all. Such fairness, though, does not reduce the fervor with which he urges that we keep this country a republic.”—National Review

“Serves as an introduction to the man and his philosophy while reminding the reader of the need to understand and participate in the nation’s civic affairs.”—Washington Examiner

“This book and Justice Gorsuch’s distinguished judicial career confirm the reputation I heard so long ago—he is a legal superstar. The stories in his book, including a delightful one about an airplane ride sitting next to a young girl who was frightened of the turbulence and just needed a friend, also confirm my early impression of his kindness.”—Legal Communication & Rhetoric

“A Republic, If You Can Keep It is a powerful legacy for the next generation of Americans. Justice Gorsuch reminds us of the necessity for judges to do the right thing even when unpopular, to dispense justice dispassionately, to promote consistency in the law, and to be content serving in anonymity.”—Alberto Gonzales, former United States Attorney General

“Justice Neil Gorsuch’s Western spirit—friendly, forthright, optimistic, and deeply egalitarian—shines through in A Republic, If You Can Keep It. Addressing urgent problems of law, ethics, and government, he is practical rather than abstract, humane rather than technical, and incorrigibly good humored.”—Christopher DeMuth, Distinguished Fellow, Hudson Institute

“A Republic, If You Can Keep It is a delightful primer on civics as well as the reflections of a deeply thoughtful judge.”—Mary Ann Glendon, Learned Hand Professor of Law, Harvard University

“A glimpse of the character and career of a Justice who will profoundly influence American law for decades to come. And there’s plenty in these essays for interested readers of all stripes, whether conservative, libertarian, moderate, or liberal.”—Eugene Volokh, Gary T. Schwartz Distinguished Professor of Law, UCLA School of Law

“In A Republic, If You Can Keep It, Justice Gorsuch speaks to where we have been as a country and where we are going. It should be required reading for anyone interested in our Constitution and our Republic in the twenty-first century.”—Tim Meyer, professor and director, International Legal Studies Program, Vanderbilt University Law School

“In this powerful book, Justice Neil Gorsuch explains why he has chosen to make the connection between civic knowledge, civil dialogue, and self-government the focus of his public activities. A Republic, If You Can Keep It is an invaluable case for the importance of civics and civility that will inform constitutional debates among Americans of all perspectives.”—Jeffrey Rosen, president and CEO of the National Constitution Center
Read More