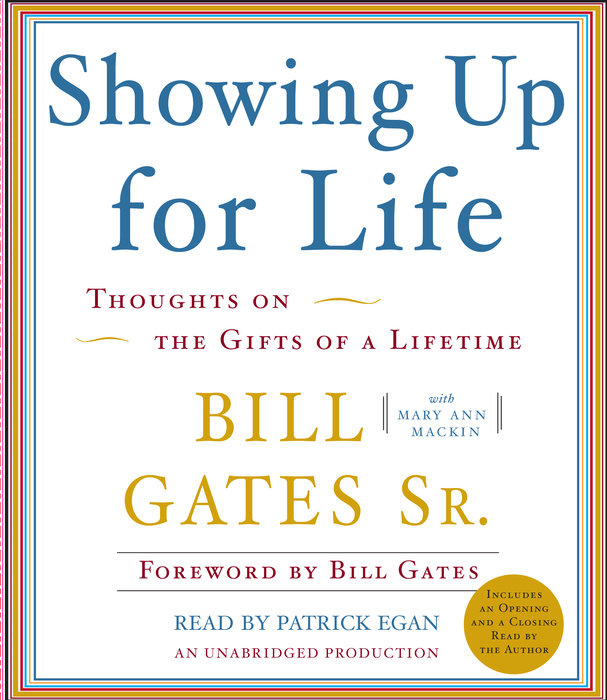 Written by: Bill Gates, Sr. & Mary Ann Mackin
Read by: Patrick Egan & Bill Gates, Sr.
3 Hours and 36 Minutes Imprint: Random House Audio Genre: Self-Help - Motivational & Inspirational Release Date: April 28, 2009
A heartfelt, deeply personal book, Showing Up for Life shines a bright light on the values and principles that Bill Gates Sr. has learned over a lifetime of “showing up” — lessons that he learned growing up in the Great Depression, and which he instilled in his children and continues to practice on the world stage as the co-chair of the Bill & Melinda Gates Foundation.

Through the course of several dozen narratives arranged in roughly chronological fashion, Gates introduces the people and experiences that influenced his thinking and guided his moral compass. Among them: the scoutmaster who taught him about teamwork and self reliance; his famous son, Trey, whose curiosity and passion for computers and software led him to ultimately co-found Microsoft. Through revealing stories of his daughters, Kristi and Libby; his late wife Mary, and his current wife Mimi; and his work with Nelson Mandela and Jimmy Carter, among others, he discusses the importance of hard work, getting along, honoring a confidence, speaking out, and much more.

Showing Up for Life translates one man’s experiences over four score years of living into an inspiring road map for readers everywhere.

As Bill Gates Sr. puts it:

I’m 83 years old. Representing the Bill & Melinda Gates Foundation and everyone who is a part of it has given me the opportunity to see more of the world and its rich possibilities than most people ever do. I never imagined that I’d be working this late in life, or enjoying it so much.

Read More
“Bill Senior is as wise as his son is brilliant. I’ve learned a lot from both of them and believe everyone can benefit from the insights Bill Senior shares in this book.”
--Warren Buffett

"Bill Gates Sr. is a wonderful example of what it means to be a global citizen, teaching us how we can work together for a more just and fair society."
--President Jimmy Carter

“Bill Gates Sr. does more than just show up in this charming and instructive guide to a good life. He shares lessons learned as a husband, a father, a lawyer, a philanthropist and a citizen.  Showing up for life is a gift of great value.”
--Tom Brokaw
Read More

Audiobooks to Inspire You to Give Back