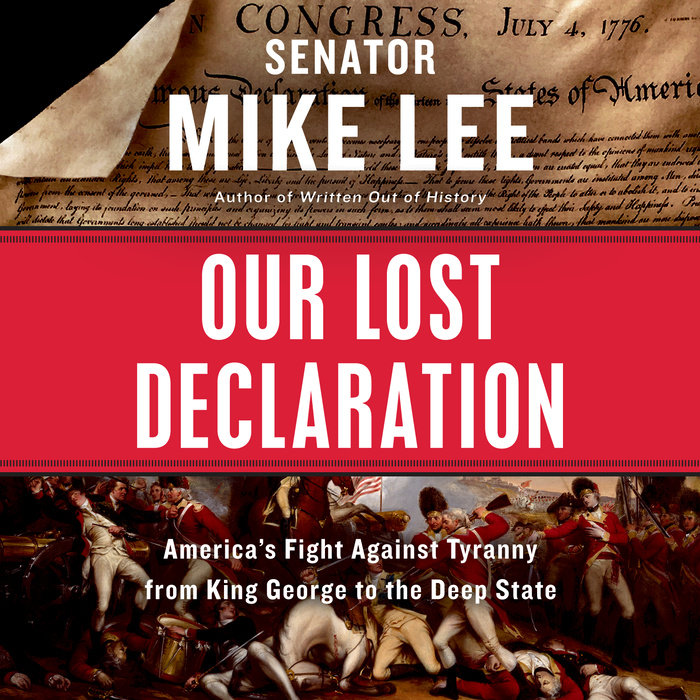 There is perhaps no more powerful sentence in human history, written in Philadelphia in the oppressively hot summer of 1776: "We hold these truths to be self-evident, that all men are created equal, that they are endowed by their Creator with certain unalienable Rights, that among these are Life, Liberty, and the pursuit of Happiness."

Despite the earth-shattering power of Jefferson's simple sentence and the document in which it is found, many Americans today don't understand or appreciate the Declaration's gravity. As a result, we have lost touch with much of what makes our country so special: the distinctly American belief in the dignity of every human soul.

Our nation was born in an act of rebellion against an all-powerful government. In Our Lost Declaration, Senator Mike Lee tells the dramatic, little-known stories of the offenses committed by the British crown against its own subjects. From London's attempts to shut down colonial legislatures to hauling John Hancock before a court without a jury, the abuses of a strong central government were felt far and wide. They spurred our Founders to risk their lives in defense of their rights, and their efforts established a vision of political freedom that would change the course of history.

Lee shares new insights into the personalities who shaped that vision, such as:

Senator Lee makes vividly clear how many abuses of federal power today are rooted in neglect of the Declaration, including federal overreach that corrupts state legislatures, the judicial system, and even international trade. By rediscovering the Declaration, we can remind our leaders in Washington D.C. that they serve us--not the other way around.
Read More
“The Declaration was a death sentence to those who wrote it and signed it. Today it is nothing less than a death sentence to all those who do not read or understand it. This timely and critical follow-up to Senator Mike Lee's bestselling Written Out of History will quickly and clearly demonstrate how many truths that our country once described as 'self evident' are, today, anything but.” —Glenn Beck, host of TheBlaze and author of Addicted to Outrage, Liars, and Agenda 21

“Every American, whatever their personal politics might be, can and should appreciate the genius of our Declaration of Independence, along with the struggle faced by Thomas Jefferson and his fellow founders to make this great experiment in democracy flourish. Senator Lee's new book expertly charts that experiment's dramatic and improbable beginnings.” —Sen. Joe Manchin (D—West Virginia)

“Senator Mike Lee wrote this incredible story of liberty’s founding moment with the same passion for America's history and first principles that he brings to the Senate. In this book, you’ll encounter rigorous argument, thrilling history, and invaluable insights into what it means to be a patriot today.”—Sen. Lindsey Graham (R—South Carolina)

“Mike Lee’s understanding of and love for our Constitution and Declaration have been evident to us throughout his impressive Senate career. This work combines thorough historical analysis and irresistible storytelling that brings to life on every page the principles for which our founding heroes fought, and which we today must understand and fight to preserve.” —Jeff Sessions, former Attorney General of the United States

“For the second time, America is a house divided. On the first occasion, Abraham Lincoln recovered and restored the “ancient faith” of the American people in our Declaration of Independence. In a detailed and well documented account, Mike Lee sets about the same task. He brings experience and study, deep and long, to the task, and he produces a book that is a blessing to us all.” —Larry Arnn, president of Hillsdale College and author of Churchill’s Trial
Read More