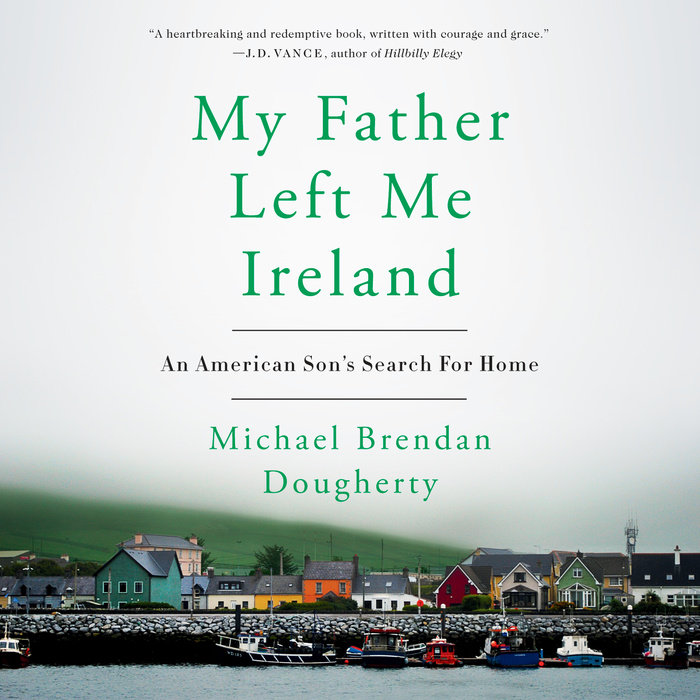 “A heartbreaking and redemptive book, written with courage and grace.”
–J.D. Vance, author of Hillbilly Elegy

The child of an Irish man and an Irish-American woman who split up before he was born, Michael Brendan Dougherty grew up with an acute sense of absence. He was raised in New Jersey by his hard-working single mother, who gave him a passion for Ireland, the land of her roots and the home of Michael's father. She put him to bed using little phrases in the Irish language, sang traditional songs, and filled their home with a romantic vision of a homeland over the horizon.

Every few years, his father returned from Dublin for a visit, but those encounters were never long enough. Devastated by his father's departures, Michael eventually consoled himself by believing that fatherhood was best understood as a check in the mail. Wearied by the Irish kitsch of the 1990s, he began to reject his mother's Irish nationalism as a romantic myth.

Years later, when Michael found out that he would soon be a father himself, he could no longer afford to be jaded; he would need to tell his daughter who she is and where she comes from. He immediately re-immersed himself in the biographies of firebrands like Patrick Pearse and studied the Irish language. And he decided to reconnect with the man who had left him behind, and the nation just over the horizon. He began writing letters to his father about what he remembered, missed, and longed for. Those letters would become this book.

Along the way, Michael realized that his longings were shared by many Americans of every ethnicity and background. So many of us these days lack a clear sense of our cultural origins or even a vocabulary for expressing this lack--so we avoid talking about our roots altogether. As a result, the traditional sense of pride has started to feel foreign and dangerous; we've become great consumers of cultural kitsch, but useless conservators of our true history.

In these deeply felt and fascinating letters, Dougherty goes beyond his family's story to share a fascinating meditation on the meaning of identity in America.
Read More
“A heartbreaking and redemptive book, written with courage and grace. It is fascinating reading for anyone who has ever wondered about the pain caused by that increasingly common American problem: sons growing up without their fathers. For those who have endured that pain, it is essential.” —J. D. Vance, author of Hillbilly Elegy

"This rich, poetic book is not only about fathers and sons; it's also about discovering, through pain and perseverance, the most profound meaning of patriotism." —Rod Dreher, author of The Benedict Option

“A beautiful ode to the father of a fatherless boy, and to the redemptive power of a sense of history.” —Reihan Salam, author of Melting Pot or Civil War?

“Beautiful, poignant . . . Dougherty’s memoir resonates because loving your father and loving his history isn’t unique to just some people and some places. We all want these same intangible things Dougherty so deftly describes.” —Washington Examiner

"A book with a unique thesis, written by one of the most forceful and honest political commentators currently writing.” —University Bookman