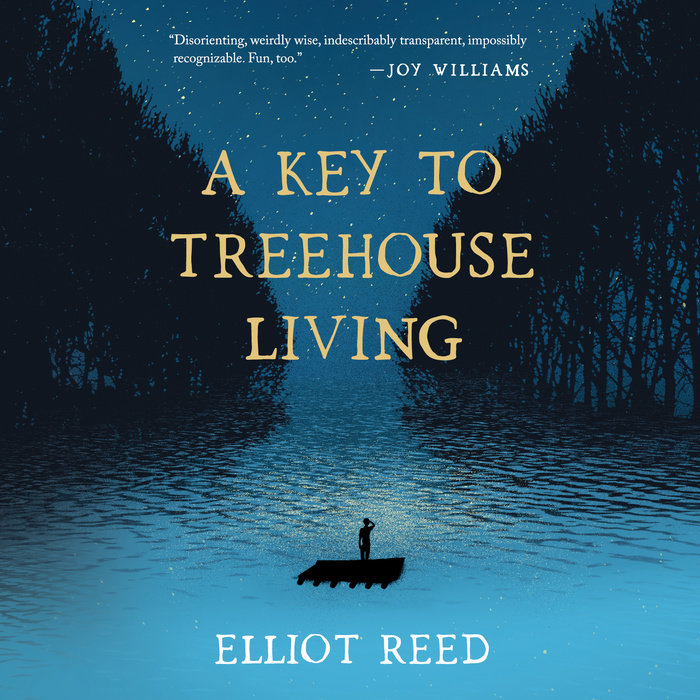 A Key to Treehouse Living is the adventure of William Tyce, a boy without parents, who grows up near a river in the rural Midwest. In a glossary-style list, he imparts his particular wisdom on subjects ranging from ASPHALT PATHS, BETTA FISH, and MULLET to MORTAL BETRAYAL, NIHILISM, and REVELATION. His improbable quest—to create a reference volume specific to his existence—takes him on a journey down the river by raft (see MYSTICAL VISION, see NAVIGATING BIG RIVERS BY NIGHT). He seeks to discover how his mother died (see ABSENCE) and find reasons for his father’s disappearance (see UNCERTAINTY, see VANITY). But as he goes about defining his changing world, all kinds of extraordinary and wonderful things happen to him.

Unlocking an earnest, clear-eyed way of thinking that might change your own, A Key to Treehouse Living is a story about keeping your own record straight and living life by a different code.

Dark yet uplifting . . . This novel's true joy may be the wonder it radiates about a world as beautiful as it is cruel. See 'OVERCOME BY EMOTION.'—Booklist

Inventive, illuminating . . . Reed offers an impressionistic and profound exploration of self and consciousness.—Publishers Weekly

William sets off down river in a Huck Finn-esque journey that takes him physically and emotionally through mystical and awe-inspiring spaces. . . . giving a book about existential darkness an undeniable sense of beauty and wonder."—Shelf Awareness, Starred Review

A Key to Treehouse Living—it’s terrific, funny, poignant and just weird enough, transcends that great form. I ate it up. —Jess Walter

A Key to Treehouse Living by Elliot Reed scrambles up all the customary codes of the novel to piece together, at last, the moving story of a lost boy searching out his place in the world. What appears as all indexed coda turns out to be a well-told tale and, more vitally for me, the accumulation of enormous incidental pleasures. —Joshua Ferris

Huckleberry Finn advanced out of antebellum doldrums into the poetic modern perverse, with the same charm. Subtle, daring, brilliant.—Padgett Powell

A Key To Treehouse Living’s precocious autodidact manages his abandonment at the world's hands by remembering that courage might be the ability to not think too long about the worst that can happen. A moving and funny and impressive debut. —Jim Shepard

Powered in part by longing and a need to make odd associations add up, this very appealing novel emplys jellybeans and gypsies, tree forts and rafts, and a character known as El Hondero to trace the odd conjuring that this narrator brings us in on. A memorable debut.—Amy Hempel

Captivating . . . Through its deceptively simple structure, A Key to Treehouse Living creates a portrait of a compelling, perceptive adolescent who keeps slipping through society’s cracks. —Foreword Reviews
Read More