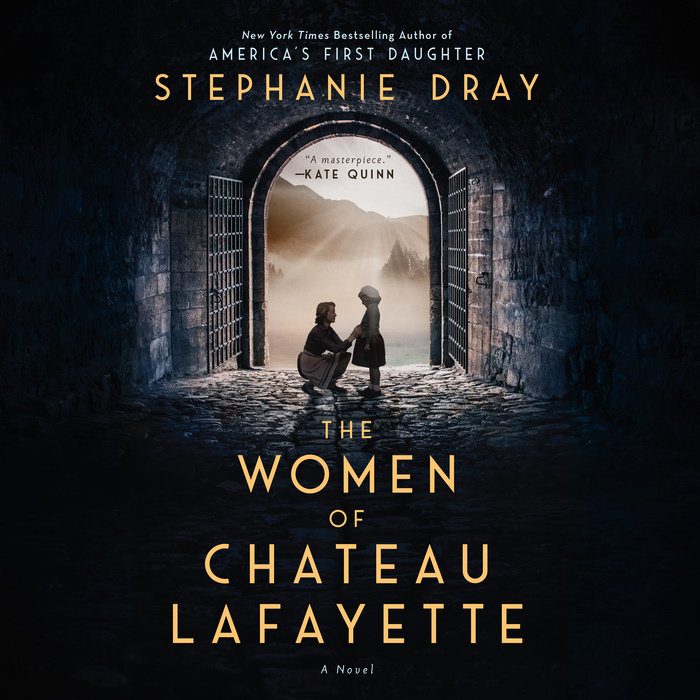 An epic saga from New York Times bestselling author Stephanie Dray based on the true story of an extraordinary castle in the heart of France and the remarkable women bound by its legacy.

Most castles are protected by men. This one by women.

A founding mother...
1774. Gently-bred noblewoman Adrienne Lafayette becomes her husband, the Marquis de Lafayette’s political partner in the fight for American independence. But when their idealism sparks revolution in France and the guillotine threatens everything she holds dear, Adrienne must renounce the complicated man she loves, or risk her life for a legacy that will inspire generations to come.

A daring visionary...
1914. Glittering New York socialite Beatrice Chanler is a force of nature, daunted by nothing—not her humble beginnings, her crumbling marriage, or the outbreak of war. But after witnessing the devastation in France firsthand, Beatrice takes on the challenge of a lifetime: convincing America to fight for what's right.

A reluctant resistor...
1940. French school-teacher and aspiring artist Marthe Simone has an orphan's self-reliance and wants nothing to do with war. But as the realities of Nazi occupation transform her life in the isolated castle where she came of age, she makes a discovery that calls into question who she is, and more importantly, who she is willing to become.

Intricately woven and powerfully told, The Women of Chateau Lafayette is a sweeping novel about duty and hope, love and courage, and the strength we take from those who came before us.
Read More
“[R]iveting…We can learn from Adrienne, Beatrice, and Marthe's stories, even as we're swept away.” —Oprah Magazine

“It's a story about survival and how three women somehow make it through tragedy to ensure a better world for future generations.”—Cosmo

"This is a wildly impressive novel with characters who fly off the page. The Women of Chateau Lafayette unflinchingly describes the toll that war and the fight for democracy takes on us all. And perhaps more poignantly, it reminds us that we are forever connected to our past."—The Jewish Journal

“What blew me away was not [the women’s] strength—I’ve read more than enough novels and seen enough of the world to know how strong women are—but how distinct they are. They aren’t just any three women; Stephanie Dray has breathed life into her protagonists…I loved sinking into this book, and anyone who enjoys historical fiction will as well.”—Manhattan Book Review

"Stephanie Dray's latest is a masterpiece, braiding three stories into a single tale of courage, humanity, and women triumphing in the face of overwhelming odds. Three heroines with seemingly nothing in common—a French Revolution Founding Mother struggling to preserve her family, a World War I socialite turned passionate activist, and a World War II orphan pulled into the French Resistance—turn out to have everything in common as they struggle through the chaos of three separate wars to forge a united legacy. The Women of Chateau Lafayette is destined to soar!"
—Kate Quinn, New York Times bestselling author of The Alice Network

“Vividly told and compelling. The stories of these three splendid women intertwine beautifully into a heart-stopping tale.”
—Frances Liardet, New York Times bestselling author of We Must Be Brave

"If it's the details that bring historical fiction alive, Stephanie Dray has not only painted the most vivid world imaginable, but she has quite nearly created a veritable time machine to the past. The Women of Chateau Lafayette shines with her incredibly meticulous research, and against that masterfully built backdrop, she has placed three extraordinary women, each fighting her own battle in a different war, whose lives are connected in ways that will make your heart soar. You'll be mesmerized by this sprawling, epic, masterful tale of love, heartbreak, strength, and duty, all set across a century and a half of riveting French and American history. The fascinating Author’s Note at the end is the final dusting of sugar on this complex, unforgettable French treat."
—Kristin Harmel, New York Times bestselling author of The Book of Lost Names

"Just dazzling! Three women, three wars, one French chateau and a whole lot of heroism: The Women of Chateau Lafayette is quite simply breathtaking in its scope and accomplishment. Prepare to be swept away to France and beyond by a master storyteller.”
—Natasha Lester, New York Times bestselling author of The Paris Secret

“Prepare to be swept away by utterly masterful storytelling. Stephanie Dray’s The Women of Chateau Lafayette abounds with wartime intrigue, superb historical detail, and unforgettable women of courage you won’t soon forget, nor should you. A captivating page-turner from first word to last."
—Susan Meissner, author of The Nature of Fragile Things

“This is by far one of the grandest novels I’ve read in a long time. A masterpiece of historical fiction. Stephanie Dray has created an all-encompassing saga spanning three wars with three unforgettable women at its core. The immense scope of research, so seamlessly infused into Dray’s stunning prose, is mind-blowing. I simply can’t say enough good things about this brilliant novel.”
—Renee Rosen, bestselling author of The Social Graces

"A rich and immersive deep dive into three tumultuous eras in French history via the lives of three remarkable women.  Despite the strictures of their times and the hardships they face, Stephanie Dray's women of Chateau Lafayette-- the aristocrat, the artist, the orphan-- are testament to the power of the individual to take a stand and shape the course of history.  Warning: you'll want desperately to know how it all turns out while wanting just as desperately for none of their stories to end....  And you'll catch yourself thinking about all three women long after the book has been closed."
—Lauren Willig, New York Times bestselling author of Band of Sisters

"Impeccably researched and masterfully told... This ode to the strength of women throughout the ages is a tour de force!"
—Stephanie Thornton, USA Today bestselling author of And They Called It Camelot

“Stephanie Dray sparkles and astounds with this compelling and seamlessly woven multigenerational epic about the women who resisted, fought, and sacrificed to protect Lafayette's legacy and our most cherished ideals and institutions. A monumental achievement and truly historical fiction at its finest!"
—Laura Kamoie, New York Times bestselling co-author of America's First Daughter

“A masterful work of historical fiction, enthralling, immersive, and utterly impossible to put down. Stephanie Dray deftly weaves together the lives of three fascinating, courageous women, separated in time but united in their enduring connections to an extraordinary castle in the French countryside.”
—Jennifer Chiaverini, New York Times bestselling author of Resistance Women

“Captivating, moving, and utterly unforgettable, The Women of Chateau Lafayette is extraordinary in every aspect. Dray’s astounding depth of research and richly drawn characters combine to brilliant effect in this epically breathtaking tale that held me in its grips from the very first page. I didn’t just read the interwoven journeys of three remarkable women, I lived and fought and endured alongside them. An absolute must-read!”
—Kristina McMorris, New York Times bestselling author of Sold on a Monday

“Expert storytelling…highly recommended, sure to appeal to fans of women's fiction, WWII-era historical fiction, and the musical Hamilton.”—Booklist (starred review)

“Dray poignantly reminds us of the undervalued contributions of women throughout history.”—BookPage (starred review)

"This is a history-sweeping story encompassing the French Revolution and both world wars, woven around a mix of fictional and real-life characters....It’s a long, satisfying book, deeply researched by this wonderful historical novelist."—AARP
Read More