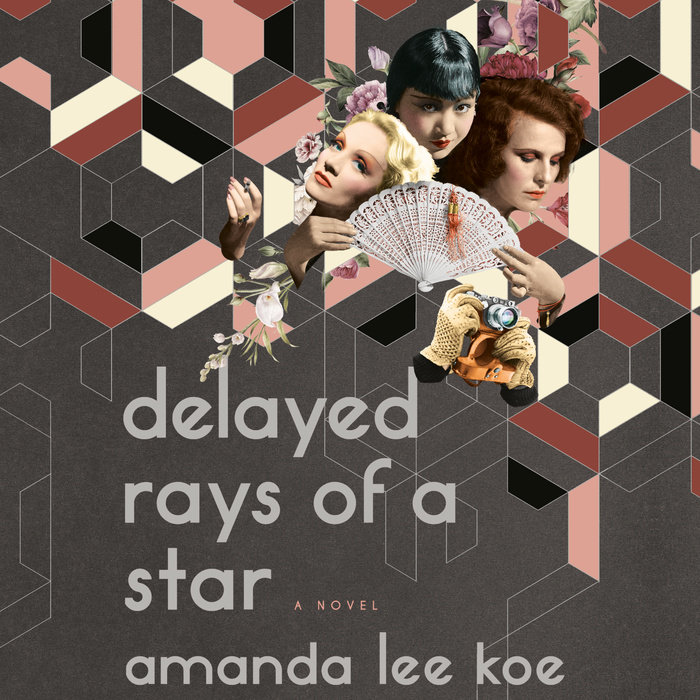 A dazzling debut novel following the lives of three groundbreaking women--Marlene Dietrich, Anna May Wong, and Leni Riefenstahl--cinema legends who lit up the twentieth century

At a chance encounter at a Berlin soirée in 1928, the photographer Alfred Eisenstaedt captures three very different women together in one frame: up-and-coming German actress Marlene Dietrich, who would wend her way into Hollywood as one of its lasting icons; Anna May Wong, the world's first Chinese American star, playing bit parts while dreaming of breaking away from her father's modest laundry; and Leni Riefenstahl, whose work as a director of propaganda art films would first make her famous--then, infamous.
From this curious point of intersection, Delayed Rays of a Star lets loose the trajectories of these women's lives. From Weimar Berlin to LA's Chinatown, from a bucolic village in the Bavarian Alps to a luxury apartment on the Champs-Élysées, the different settings they inhabit are as richly textured as the roles they play: siren, victim, predator, or lover, each one a carefully calibrated performance. And in the orbit of each star live secondary players--a Chinese immigrant housemaid, a German soldier on leave from North Africa, a pompous Hollywood director--whose voices and viewpoints reveal the legacy each woman left in her own time, as well as in ours.
Amanda Lee Koe's playful, wry prose guides the reader dexterously around murky questions of identity, complicity, desire, and difference. Intimate and clear-eyed, Delayed Rays of a Star is a visceral depiction of womanhood--its particular hungers, its oblique calculations, and its eventual betrayals--and announces a bold new literary voice.
Read More
“Dazzling . . . It's larger-than-life history made intimately human.”
—USA Today (20 of the Season’s Hottest New Books)

“Fame discourages us from looking at icons as people, as if doing so will make them lose their power. Amanda Lee Koe's debut novel, Delayed Rays of a Star, proves that it is just the opposite, that it is their humanity, their internal struggles, that makes their outsized performances all the richer . . . Expertly woven, its characters alive and full-bodied. Blending questions about pop culture, war, and art, Delayed Rays of a Star is that rare book that is neither high- nor low-brow, refusing such facile dichotomies and playing, instead, in the messiness of the grey areas.
—Ilana Masad, NPR.org

“This is a voraciously intelligent, heartrending novel. Few books have so much life in them, or are so willing to explore the terrors of war and desire, the ruthlessness of genius. Maybe this novel can face the dark so fearlessly because it is itself so radiant, a blazing star. Amanda Lee Koe is a brilliant writer.”
—Garth Greenwell, author of What Belongs to You

“Koe weaves together an epic tale . . . It’s an intimate and raw exploration of womanhood through the eyes of three legendary actresses.”
—Character Media

“The brightest star of Amanda Lee Koe's debut novel Delayed Rays of a Star is Amanda Lee Koe . . . One of those astronomical rarities people get up in the middle of the night to behold, natural spectacles yet as assured as the collaboration of high-energy physicists.”
—Bay Area Reporter

“In this swirling, brilliant debut, both the famous and the unknown struggle to navigate the tides of history. Cultures collide, horizons appear, worlds collapse. Filled with hope and desperation, Amanda Lee Koe’s novel is a timely and timeless enquiry into what it means to be a woman, and a human being, in a universe that often seems not to care.”
—Tash Aw, author of The Harmony Silk Factory and We, the Survivors

“With a cool eye, devastating honesty, and an abundance of compassion, Amanda Lee Koe traverses the first half of the 20th century to bring 21st-century insights into the complex sexuality of women, the effects of racism, and the ruins that fascism left in its wake. A profound examination of the agony of power, the caprice of fame, and the indignities of growing old, Delayed Rays of a Star is a rare gem—a page-turning, inventive literary novel that is learned and wise. An absolute must read.”
—Binnie Kirshenbaum, author of Rabbits for Food

“Delayed Rays of a Star is a big, globetrotting, time-traveling wonder of a novel that made me laugh and in a hundred other ways appreciate the playful brilliance of Amanda Lee Koe. This is literature to feast upon and share, and a bold new voice to celebrate.”
—Ben Metcalf, author of Against the Country

“Koe’s ambitious and well-researched debut novel successfully melds historical fact with expansive and generous storytelling . . . Throughout, their stories contend with the notion of authenticity in life and art—of how performers define themselves in the public sphere and behind closed doors. Readers will find much to ponder in these vivid, fictionalized deep dives into three women who changed cinema.”
—Publishers Weekly

“Expansive and engaging, Koe’s debut novel explores the lives of three famous women, their art, and the price of fame . . . Koe brings her well-known protagonists to life, and manages a sprawling story with panache.”
—Booklist

Add These July Debuts to Your Playlist