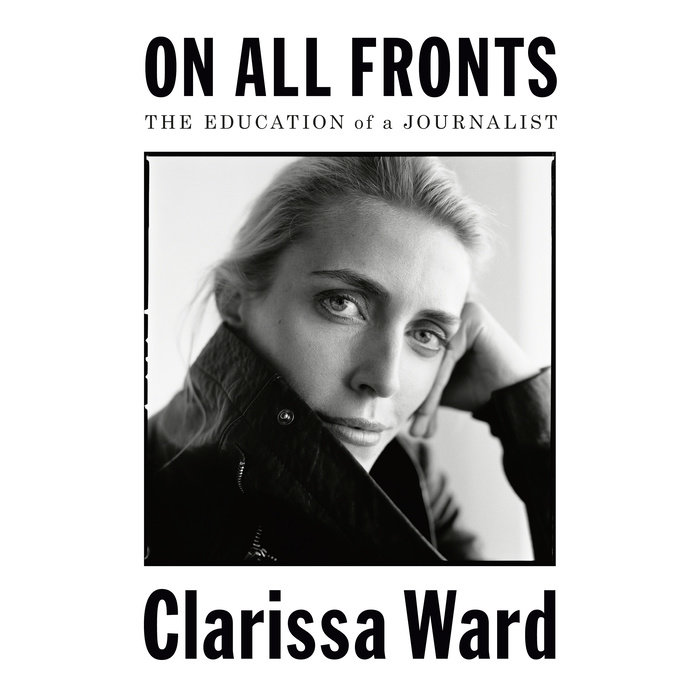 Written by: Clarissa Ward
Read by: Clarissa Ward
9 Hours and 39 Minutes Imprint: Penguin Audio Genre: Biography & Autobiography - Personal Memoirs Release Date: September 08, 2020
“On All Fronts: The Education of a Journalist beautifully outlines . . . what it means to seek the truth. It gave me a new faith in the power of reporting.” —Oprah Winfrey

The recipient of multiple Peabody and Murrow awards, Clarissa Ward is a world-renowned conflict reporter. In this strange age of crisis where there really is no front line, she has moved from one hot zone to the next. With multiple assignments in Syria, Egypt, and Afghanistan, Ward, who speaks seven languages, has been based in Baghdad, Beirut, Beijing, and Moscow. She has seen and documented the violent remaking of the world at close range. With her deep empathy, Ward finds a way to tell the hardest stories. On All Fronts is the riveting account of Ward’s singular career and of journalism in this age of extremism.

Following a privileged but lonely childhood, Ward found her calling as an international war correspondent in the aftermath of 9/11. From her early days in the field, she was embedding with marines at the height of the Iraq War and was soon on assignment all over the globe. But nowhere does Ward make her mark more than in war-torn Syria, which she has covered extensively with courage and compassion. From her multiple stints entrenched with Syrian rebels to her deep investigations into the Western extremists who are drawn to ISIS, Ward has covered Bashar al-Assad’s reign of terror without fear. In 2018, Ward rose to new heights at CNN and had a son. Suddenly, she was doing this hardest of jobs with a whole new perspective.

On All Fronts is the unforgettable story of one extraordinary journalist—and of a changing world.
Read More
“On All Fronts: The Education of a Journalist beautifully outlines . . . what it means to seek the truth. It gave me a new faith in the power of reporting.” —Oprah Winfrey

“In On All Fronts, [Ward] combines grace, authority, and a humor so dry it evaporates on contact. Whether Ward is fending off the dissolute, lecherous Saif Gadhafi, son of the brutal former Libyan dictator Moammar Gadhafi, in a Moscow Mercedes, or confronting a jihadist leader with video evidence of an execution carried out by his men, she gives off the impression that the story is, above all personal considerations, sacrosanct . . . Ward shows an enduring faith in the power of reporting.” —Annalisa Quinn, NPR

“A candid, heart-pounding look into [Ward’s] life as a war correspondent . . . it’s how she tells the stories of the people on the inside, especially the children, that will stay with you. I walked away astounded by the bravery of this woman.” —Jill Hazelbaker, SVP of Public Affairs and Marketing at Uber, Bloomberg

“Ward’s journalism skills shine, putting readers on the front lines. Readers interested in the life stories of intrepid women journalists and the nature of investigative, international journalism will be captivated by this engrossing account.” —Library Journal

“[Ward’s] descriptions of her experiences at all the sites are vivid and precise . . . A thoughtful account of the excitement and pitfalls of war reporting.” —Kirkus

“Ward details her often harrowing career in this page-turning memoir . . . Readers will come away with at least a basic understanding of multiple international conflicts. This is a wonderful addition to the list of recent titles about women working in war-torn lands.” —Booklist

“Ward, CNN’s chief international correspondent, recounts her life in journalism in this insightful memoir . . . She details her often harrowing experiences that eventually took a toll on her physical and mental well-being . . . But it’s the connections she made with the civilians that really tell the story of these war-torn regions and demonstrate an empathy that makes Ward’s work so accessible . . . Ward surprises in this affecting insider view of international reporting.” —Publishers Weekly

“On All Fronts is funny, fascinating, heart-breaking and heroic. Clarissa Ward doesn’t just take us to the front lines of the world’s most dangerous places, revealing the pain and pleasure of being a foreign correspondent, she gives us a startling, and often hilarious look, at her own unconventional, almost unimaginable childhood. How did a continent-hopping Eloise, who was banished at ten to a dismal British boarding school, wind up in Beijing as a stand-in for Uma Thurman on a Quentin Tarantino film, and then break into the news business and become one of the great foreign correspondents of our time? Read on . . . Ward has an extraordinary tale to tell.” —Anderson Cooper, author of Dispatches from the Edge

“On All Fronts takes the reader on a riveting journey of storytelling as Ward crisscrosses the globe in a relentless quest to become the acclaimed Chief International Correspondent she is today. From Russia to China to Syria, the reader watches her navigate the most intense of human experiences while finding the tools to stay emotional.” —Lynsey Addario, author of It’s What I Do

“Clarissa Ward takes us on an page-turning ride through natural disasters and debaucheries; the terror and grief of war zones and the grace notes of motherhood. On All Fronts traces the formation of one of our generation’s most dynamic foreign correspondents, and gives us an intimate view of the failures and tragedies of the conflicts that are reshaping our world.” —Megan K. Stack, author of Women’s Work and Every Man In This Village Is A Liar

“There has never been a more vital time for journalists who bear witness to crimes against humanity and violations of international law, to have a voice to tell the stories of those who can not tell their one. Clarissa Ward is a reporter I have always admired—for her courage but also her clarity and her willingness to take risks to bring sometimes uncomfortable truths to light. Her memoir is a reporter's story—with all the grit and frustration and triumphs—but also a universal story of a tenacious young woman working in a hardscrabble profession who paved her own way with sheer hard work and a vision. Ward has reported diligently from many war zones, but her work in Syria will go down as a historical record of a country that the international community allowed to bleed. Everyone with a conscience should read this book.” —Janine di Giovanni, author of The Morning They Came for Us

“War correspondents have long been caricatured as vain figures of parachutist self-glory. Clarissa Ward, for all of her onscreen unflappability, has risked this investigative memoir to reveal herself as a reporter of rare modesty in her courage, rare empathy in her diligence, and rare reflection in her daring. This is a poignant and vigorous self-portrait of a journalist graced and burdened with a supreme sense of duty.” —Gideon Lewis Kraus, author of A Sense of Direction

“An honest, candid portrayal of the making of a journalist and the stories behind getting the story. With great empathy, Ward shows us what her viewers don’t see—the logistical, physical and emotional challenges of going to the toughest places—and the toll it takes. A timely reminder of the importance of bearing witness, and why there is no substitute for gutsy on-the-ground journalism.” —Rania Abouzeid, author of No Turning Back. Life, Loss, And Hope In Wartime Syria

Fresh-Picked Debuts for Harvest SeasonAudiobook Horoscopes for the Autumnal Equinox