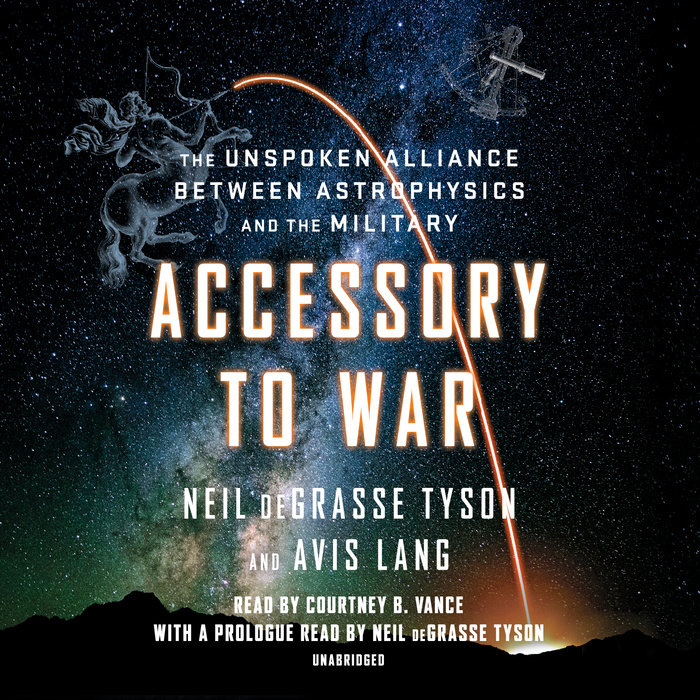 Written by: Neil deGrasse Tyson & Avis Lang
Read by: Courtney B. Vance
18 Hours and 39 Minutes Imprint: Random House Audio Genre: Science - Physics - Astrophysics Release Date: September 11, 2018
An exploration of the age-old complicity between skywatchers and warfighters, from the best-selling author of Astrophysics for People in a Hurry.

In this fascinating foray into the centuries-old relationship between science and military power, acclaimed astrophysicist Neil deGrasse Tyson and writer-researcher Avis Lang examine how the methods and tools of astrophysics have been enlisted in the service of war. "The overlap is strong, and the knowledge flows in both directions," say the authors, because astrophysicists and military planners care about many of the same things: multi-spectral detection, ranging, tracking, imaging, high ground, nuclear fusion, and access to space. Tyson and Lang call it a "curiously complicit" alliance. "The universe is both the ultimate frontier and the highest of high grounds," they write. "Shared by both space scientists and space warriors, it's a laboratory for one and a battlefield for the other. The explorer wants to understand it; the soldier wants to dominate it. But without the right technology--which is more or less the same technology for both parties--nobody can get to it, operate in it, scrutinize it, dominate it, or use it to their advantage and someone else's disadvantage."

Spanning early celestial navigation to satellite-enabled warfare, Accessory to War is a richly researched and provocative examination of the intersection of science, technology, industry, and power that will introduce Tyson's millions of fans to yet another dimension of how the universe has shaped our lives and our world.
Read More
Extraordinary....A feast of history, an expert tour through thousands of years of war and conquest....Condenses multiple bodies of work into one important, comprehensive and coherent story of the symbiotic developments of astrophysics and war....The lesson is not merely a wake-up call for astrophysicists, but for all of us, for anyone with the misapprehension that science somehow marches on separate from the rest of culture—Jennifer Carson, New York Times Book Review

Through ample research and nimble storytelling, Tyson and [Lang] trace the long and tangled relationship between state power and astronomy....Deep and eloquent.—Joshua Sokol, Washington Post

Fascinating....Retells the history of space exploration, and of the Cold War, excelling in bringing forth the entangled advances of science and military interests....The book’s message rings like a wake-up call.—Marcelo Gleiser, NPR

Archimedes and Leonardo worked for their Departments of Defense, and when the telescope was invented it was an immediate instrument of war. Why do astrophysicists even have jobs? asks Neil deGrasse Tyson. Now you can see the inside story, from early times to the cold war, the Apollo program, spy satellites and the Hubble Space Telescope, the Iraq war, and perhaps asteroid mining. A wonderful book and a fascinating read, full of amazing stories, all backed up with deep scholarship.—John Mather, Winner of the Nobel Prize in Physics

A sweeping panoramic overview of the enduring alliance between astrophysics and the military—from the Greeks to Galileo to GPS.—Science

Accessory to War is a phenomenal work that should be required reading for policy makers everywhere. —William E. Burrows, author of Deep Black: Space Espionage and National Security and This New Ocean: The Story of the First Space Age

This is an indispensable, mind-blowing account about a necessary near-future that is, tragically, not inevitable: that the disciplines of astrophysics and politics unite to forge a new frontier—not through ‘Rumsfeldian-Trumpian truculence,’ or by fattening the military while now starving science and the humanities, or by allowing China to continue to lead the U.S. in ‘worldwide research and development spending.’ These have already killed a supposed American Century. Beautifully combining a clear account of cutting-edge astrophysics and politics with a 3000-year historical perspective, this book deserves not only to be read, but to become a guide for those who hope for a better, survivable, near future.—Walter LaFeber, Tisch Distinguished University Professor Emeritus, Cornell University

Throughout history, wars tend to be won by nations that are at the forefront of science. Thus astronomers and physicists have, since ancient times, benefited from an uneasy alliance with the military. This enlightening book explores the history and current implications of this partnership between space science and national security.—Walter Isaacson, author of Steve Jobs and professor of history, Tulane University

Accessory to War is not just about astrophysics. It is a readable account of the intersection between science and security policy, complete with historical background and personal insights and anecdotes from America’s most-trusted scientist. This is a much needed read for both policymakers and the public, who in 'normal' times know and care too little about science, but in today's political climate increasingly show disdain for scientific principles that fail to fit their philosophical reality or political goals. Astrophysics is too often perceived as 'not touching me or my life,' but this book artfully explains otherwise. —Joan Johnson-Freese, professor of national security affairs, Naval War College

A wide ranging and provocative set of observations on the two-way relationship between science-based knowledge and national power, especially power of the military variety, replete with trenchant insights. Tyson and Lang’s hopeful concluding message is on-target—that knowledge-based dominance, either in space or on Earth, is not possible in today’s interconnected world, and that cooperation in the use of our knowledge is the necessary path to planetary well-being.—John M. Logsdon, professor emeritus, Space Policy Institute, George Washington University
Read More