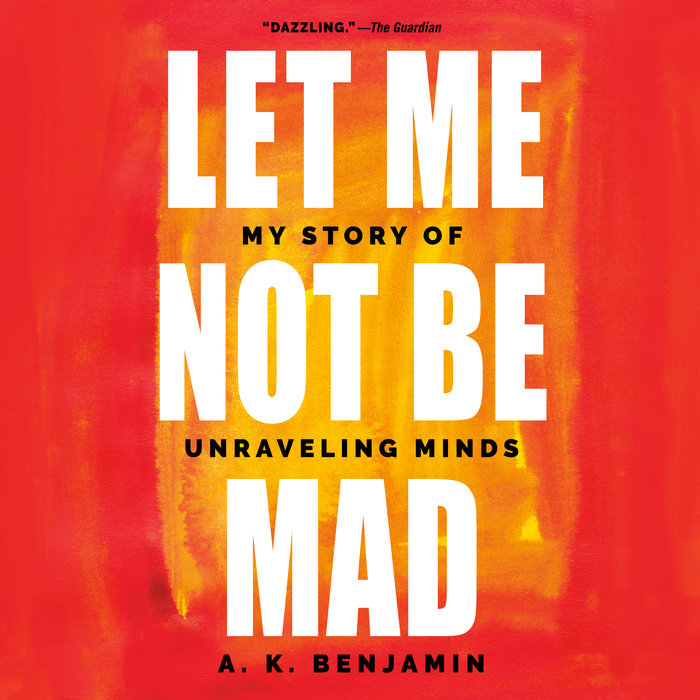 What do doctors actually think about when you list your problems in the consulting room? Are they really listening to you? Is the connection all in your head? Every day for ten years--even while his hospital became the set for a reality television series--clinical neuropsychologist A. K. Benjamin confronted these questions, and this book is his attempt to tell the truth about what happens in these rooms in hospitals the world over.

What begins as a series of exquisitely observed case studies examining personalities on the brink of collapse soon morphs into a unique work of nonfiction as Benjamin's own psyche begins to twist the story in surprising ways. Blazingly original, Let Me Not Be Mad undermines the authority we so willingly hand over to clinical psychologists as it bears witness to the self-obsession of Western society, and ultimately offers a glimpse of what it might mean to be sane and truly empathetic.

Fractured, sad, playful, brilliant, and confrontational, this is a confession by a professional that delves into the heart of the patient-doctor relationship and ultimately finds love. This twisting psychological journey will be read and reread.
Read More
Praise for Let Me Not Be Mad
“Magnificently unsettling…[Benjamin] reels off superbly sympathetic statements with the kind of professional tenderness worthy of Oliver Sacks…This book about madness becomes itself the chronicle of a shattering breakdown…[the book’s] conclusion feels like a benediction.”—The New York Times

“Benjamin travels terrain between reality and psychosis in this complex memoir of mental illness and treatment, and readers willing to burrow into troubled minds will be fascinated.”—Booklist

"A well-conceived and written exploration of the traps hidden in the art of mental healing.”—Kirkus

"A perfectly extraordinary – not to mention extraordinarily perfect – drama that centres about the fraught, ferocious, hilarious, dangerous and explosive relationships that develop between therapist and patient. Like a tense Hitchcockian psychodrama, the ticking bomb of the psychiatrist's own sanity makes itself heard on every page. In unravelling the minds of others, the mind of the analyst can often unravel too. I have rarely read a more haunting, enthralling and perfectly written account of a descent into madness. An important, profound and fascinating book."
—Stephen Fry, actor

“Imagine a gonzo Oliver Sacks communing with Edward St. Aubyn’s Patrick Melrose, R.D. Laing and the spirit of Kafka’s 'A Country Doctor,' and you still won’t quite have the flavour of this wild and strikingly original book.”
—William Fiennes, bestselling author of The Music Room and The Snow Geese

"A truly astonishing journey into and out of the mind. Not content to pin you down with the intense intimacy of his storytelling Benjamin dramatizes some of the most profound and intractable issues in neuroscience and psychiatry. I’ve never read anything like it.”
—Mark Lythgoe, neurophysiologist, professor of biomedical imaging at University College London

“A treasure of a book. Intricately woven and deeply intimate, it reveals things that astonish, surprise and improve us.”
—James Rhodes, pianist and bestselling author of Fire on All Sides

"'We cannot tell our stories and be present at the same time,' says A. K. Benjamin. Who then, brilliantly, alarmingly, with cunning and self-lacerating honesty, proceeds to dismantle his own proposition. Let Me Not Be Mad offers a spin of shifting, swerving, measured or suicidal reports, confessions and confabulations. The doctor is sick, but his intelligence, his scope of reference, his damaged sagacity could save us all. A lung-shredding march against darkness."
—Iain Sinclair, writer and filmmaker

“Let Me Not be Mad is stunning: clever, troubling, restless, honest, dishonest; one of the best portraits of madness and clinical practice I’ve read. It’s so rare for clinicians to be able to understand encounters with their patients with this kind of depth, richness and psychoanalytic acuity - let alone the glare he turns on himself. I read it in two sittings. Extraordinary.”
—Olivia Laing, author of The Lonely City

"Now we know what A. K. Benjamin has been up to for those many years away. And to think we all believed that he had been lost to the fruitcakes and the monkhood of the Big Sur. Profoundly disturbing. Profoundly moving. Profoundly profound."
—Andrew Kötting, writer and filmmaker

“In the past few years there have been a number of books of case histories written by practising psychoanalysts and neurologists…But Let Me Not Be Mad is a different sort of beast, and much more tricky. In the other books, the reader trusts the narrator to deliver a reliable portrait of each case history of madness or neurosis. But this one offers no such stability, as the narrator himself is unhinged – so much so that his clients may not even exist other than as projections of his own crazed imagination. This makes the book a dizzying whirlpool of doubt, delusion and misinformation. This effect is intentional, and many have found it compelling.” —Daily Mail

“At first I thought this an exceptionally well written book in the genre of medical story telling. The more I read the more I realised it’s an exceptional book in a genre all of its own. Insightful, wonderfully well observed and beautifully written” —Dr. Suzanne O’Sullivan, author of Is It All in Your Head?