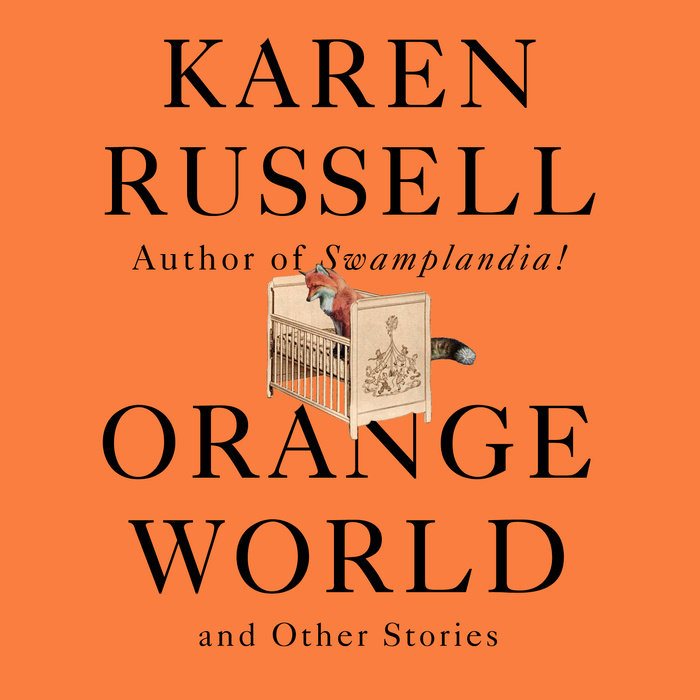 Karen Russell’s comedic genius and mesmerizing talent for creating outlandish predicaments that uncannily mirror our inner in lives is on full display in these eight exuberant, arrestingly vivid, unforgettable stories.  In“Bog Girl”, a revelatory story about first love, a young man falls in love with a two thousand year old girl that he’s extracted from a mass of peat in a Northern European bog.  In “The Prospectors,” two opportunistic young women fleeing the depression strike out for new territory, and find themselves fighting for their lives.  In the brilliant, hilarious title story, a new mother desperate to ensure her infant’s safety strikes a diabolical deal, agreeing to breastfeed the devil in exchange for his protection. The landscape in which these stories unfold is a feral, slippery, purgatorial space, bracketed by the void—yet within it Russell captures the exquisite beauty and tenderness of ordinary life. Orange World is a miracle of storytelling from a true modern master.

"[One] of our most original short story writers... [Russell] has impeccable command of her form....Russell’s particular gift lies in taking themes that are close to universal and presenting them in stories whose strangeness comes to seem entirely natural, even necessary."
--Emily St. John Mandel, The New York Times book review

“Brilliant... Stunning... Her imagination is boundless.. .Russell's last book, Vampires in the Lemon Grove was far and away one of the best books of 2013, and Orange World proves that the author has only gotten better... Russell is one of the most original American authors working today. She's also one of the best. Orange World is a thing of beauty, a stunning collection from one of the most brilliant literary minds of her generation.”
--NPR

"The must-read short-story collection of the summer... Orange World makes me want to shout with joy. Russell's ease with her material, her sheer glee on the page, shines through in each piece... Delicious... We're in the hands of a master."
--Washington Post

"Another set of masterpieces…Russell’s language rockets off the page…one of our most entrancing storytellers.”
--Vogue

"I kept Hawthorne in mind while reading Russell's astonishing new stories... Russell seems the most natural storyteller alive, so completely does she give herself to premises that might undo a lesser writer."
--Dan Chiasson, New York Review of Books

"Is there a colorist in American fiction with the same vivid talents as Karen Russell?... Her stories read like a moon-lit fantasia of these wrenching days when up is down and nature is in full revolt. These eight fabulous yarns span the globe, from the Dalmatian coast to Florida in the near future, when Miami is a watery grave... These tales are not short, but they feel even roomier owing to the way Russell cracks open narrative space with humor. Her descriptions are 21st century Dickensian genius... Russell is also the greatest user of verbs in American fiction since Annie Dillard... In these stories, though, Russell reveals we don’t have to be silent. We can shout as does this book. Look for it, with its color, it won’t be hard to find. It’s a beacon."
--The Boston Globe

"A feast of invention and a fun house of surprising wisdom, Orange World contains a ghost-ship lodge, tourist trade in a post-apocalyptic drowned city, a tornado farm, a local succubus. Karen Russell moves from the farcical to the forbidden with tender conviction. Don't miss this book of marvels!"
--Louise Erdrich

"Russell is a master of landscapes exterior and interior, with Orange World moving as deftly through a future Florida underwater as through 'that topography of the early weeks and months right after childbirth'... She has always used a phantasmagorical road map to chart her way through emotional terrain."
--Portland Monthly

"[A] brilliantly inventive... wonderful new collection of short stories...Russell grounds each story in human experience, both poignant and hilarious in turn... Underlying all of this is the exquisite beauty of Russell’s sentences, which will repeatedly surprise readers with their imagery and masterful language."
--BookPage [starred review]

"Eight crisp stories that will leave longtime fans hungry for more. Since her debut more than a decade ago, Russell has exhibited a commitment to turning recognizable worlds on their heads in prose so rich that sentences almost burst at the seams. Her third collection is no exception, and its subjects—forgotten pockets of violent American history, climate-related apocalypse, the trials of motherhood—feel fresh and urgent in her care...A momentous feat of storytelling in an already illustrious career."
--Kirkus Reviews [starred review]

"Virtuoso Russell, gifted with acute insights, compassion, and a daring, free-diving imagination, explores the bewitching and bewildering dynamic between "the voracious appetite of nature and its yawning indifference" and humankind's relentless profligacy and obliviousness."
--Booklist [starred review]

"Amidst the leading pack of talents Karen Russell writes the most like she’s on fire, as in: this close to revelations. Orange World is her best collection yet. Her imagination’s baroque syntax has been planed down to the absolute essentials, allowing the power of her vision to speak for itself...This is prophetic work written with clarifying fury."
--John Freeman, Lit Hub
Read More

Get Crafty! 6 Audiobooks for Millennial Makers