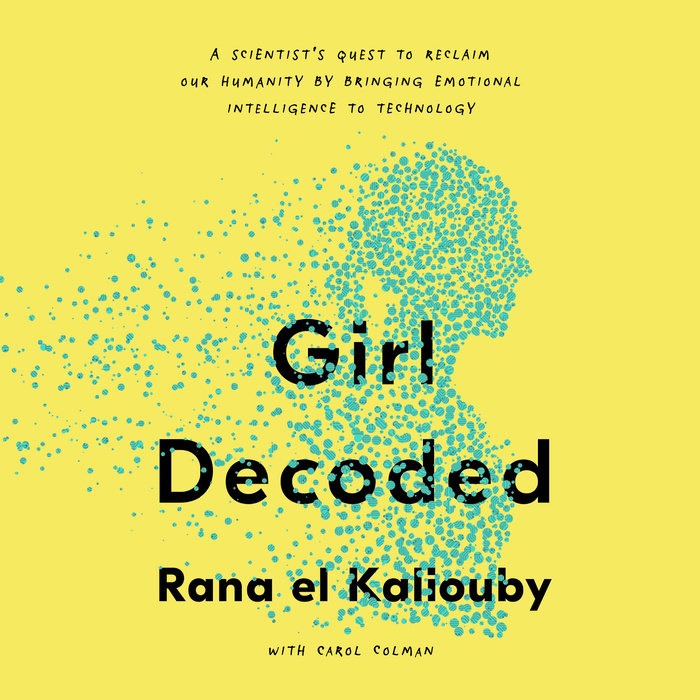 Written by: Rana el Kaliouby & Carol Colman
Read by: Rana el Kaliouby
11 Hours and 44 Minutes Imprint: Random House Audio Genre: Biography & Autobiography - Personal Memoirs Release Date: April 21, 2020
In a captivating memoir, an Egyptian American visionary and scientist provides an intimate view of her personal transformation as she follows her calling—to humanize our technology and how we connect with one another.

LONGLISTED FOR THE PORCHLIGHT BUSINESS BOOK AWARD • “A vivid coming-of-age story and a call to each of us to be more mindful and compassionate when we interact online.”—Arianna Huffington

NAMED ONE OF THE BEST BOOKS OF THE YEAR BY PARADE

Rana el Kaliouby is a rarity in both the tech world and her native Middle East: a Muslim woman in charge in a field that is still overwhelmingly white and male. Growing up in Egypt and Kuwait, el Kaliouby was raised by a strict father who valued tradition—yet also had high expectations for his daughters—and a mother who was one of the first female computer programmers in the Middle East. Even before el Kaliouby broke ground as a scientist, she broke the rules of what it meant to be an obedient daughter and, later, an obedient wife to pursue her own daring dream.

After earning her PhD at Cambridge, el Kaliouby, now the divorced mother of two, moved to America to pursue her mission to humanize technology before it dehumanizes us. The majority of our communication is conveyed through nonverbal cues: facial expressions, tone of voice, body language. But that communication is lost when we interact with others through our smartphones and devices. The result is an emotion-blind digital universe that impairs the very intelligence and capabilities—including empathy—that distinguish human beings from our machines.

To combat our fundamental loss of emotional intelligence online, she cofounded Affectiva, the pioneer in the new field of Emotion AI, allowing our technology to understand humans the way we understand one another. Girl Decoded chronicles el Kaliouby’s journey from being a “nice Egyptian girl” to becoming a woman, carving her own path as she revolutionizes technology. But decoding herself—learning to express and act on her own emotions—would prove to be the biggest challenge of all.
Read More
“Rana el Kaliouby’s journey to overcome self-doubt and embrace her ambition will resonate with women everywhere. Girl Decoded is the kind of honest and inspiring story that will encourage other women to share their experiences and own their power.”—Tory Burch, founder and executive chairman of Tory Burch LLC

“Both a candid memoir and a confession, [Dr.] el Kaliouby’s intriguing book lays bare the emotional complexities of ‘a nice Egyptian girl’ while displaying the steely strength, perseverance and naked willpower that has propelled her to imagine a different type of future for both herself and humankind. As the girl decodes herself, she opens up new hope to address the emotional blindness and ‘empathy crisis’ that affects us all.”—The Wall Street Journal

“Girl Decoded is a rousing reminder that women can and should be able to succeed without sacrificing any part of their wholeness.”—Esquire

“Girl Decoded is an affecting memoir that highlights the tension between one woman’s upbringing and her aspirations. Such life stories, told well, have the power to uplift us all.”—Science

“As an entrepreneur and computer scientist, Rana el Kaliouby has done pioneering work to infuse technology with emotion and leverage technology to enrich our understanding of emotions. In this forthright, engaging memoir, she takes us behind the scenes of her work and through the key events that have shaped her life and worldview.”—Adam Grant, New York Times bestselling author of Originals and Give and Take

“El Kaliouby’s dream was to enable computers to engage human emotions, but she needed to engage her own emotions to invent machines with emotions. Her remarkable life story is a captivating way to understand this new technological frontier: machines with emotional intelligence.”—Kevin Kelly, futurist, founding editor of Wired, and author of The Inevitable

“Brilliant and inspiring—words that describe both Rana el Kaliouby and her extraordinary new book, which tells the story of her life and of the crucial role she played in the invention of artificial emotional intelligence . . . a poignant and deeply personal tale about love, loss, and coming of age on a new scientific frontier.”—Daniel Gilbert, professor of psychology at Harvard University and author of Stumbling on Happiness

“It is critical that we embrace a future in which technology enhances our most human qualities, specifically empathy, caring, and emotional intelligence.”—Peter Diamandis, founder and chairman of the XPRIZE Foundation and coauthor of The Future Is Faster Than You Think

“Emotional intelligence in AI is every bit as critical for machines as it is for humans. No one has done more to create that capability than Rana el Kaliouby. This book tells the remarkable story of her pioneering journey, breaking barriers all along the way. A must-read!”—Erik Brynjolfsson, professor at MIT Sloan School of Management and coauthor of The Second Machine Age and Machine, Platform, Crowd
Read More