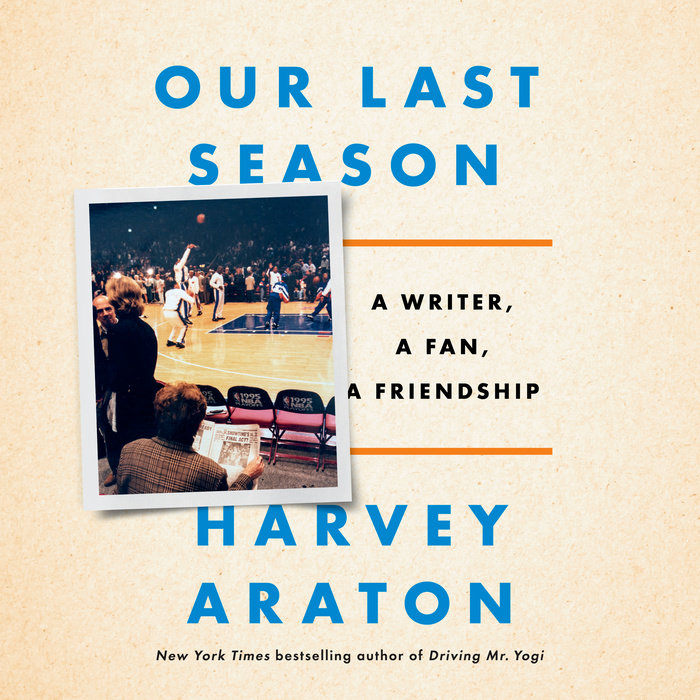 Written by: Harvey Araton
Read by: Fred Berman
6 Hours and 33 Minutes Imprint: Penguin Audio Genre: Biography & Autobiography - Personal Memoirs Release Date: October 27, 2020
The moving story of a bond between sportswriter and fan that was forged in a shared love of basketball and grew over several decades into an extraordinary friendship

"This is a story about friendship, sports, aging, and ultimately time itself--the things it strips away and the things it cannot touch. I loved it."--Wright Thompson, author of Pappyland

Harvey Araton is one of New York's--and the nation's--best-known sports journalists, having covered thousands of Knicks games over the course of a long and distinguished career. But the person at the heart of Our Last Season, Michelle Musler, is largely anonymous--except, that is, to the players, coaches, and writers who have passed through Madison Square Garden, where she held season tickets behind the Knicks bench for 45 years. In that time, as she juggled a successful career as a corporate executive and single parenthood of five children, she missed only a handful of home games. The Garden was her second home--and the place where an extraordinary friendship between fan and sportswriter was forged.

That relationship soon grew into something much bigger than basketball, with Michelle serving as a cherished mentor and friend to Harvey as he weathered life's inevitable storms: illness, aging, and professional challenges and transitions. During the 2017-18 NBA season, as Michelle faces serious illness that prevents her from attending more than a few Knicks games, Harvey finally has the chance to give back to Michelle everything she has given him: reminders of all she's accomplished, the blessings she's enjoyed, and the devoted friend she has been to him.

Chock-full of anecdotes from behind the scenes and cameos from Knicks legends--from Frazier, King, and Ewing to Riley, Van Gundy, and many more--the story of Harvey and Michelle's nearly four decades of friendship is a delight for basketball fans. But at its core, Our Last Season is a book for all of us, offering a poignant and inspiring message about how to live with passion, commitment, and optimism.
Read More
“Downright charming. . . . This is a memoir about life as much as about sports, although the ever-wise Musler would have likely argued that the two are inherently connected. . . . This heartfelt story of friendship is one to be savored.”—The Christian Science Monitor

“A wonderful and engaging book, not only for basketball and Knicks fans, but also a meaningful look about the importance of friendship.” —Library Journal, starred review

“In Our Last Season, Araton shares his years in sports media and covering the New York Knicks against the backdrop of his long, lovely and perhaps unlikely friendship with superfan Michelle Musler. . . . Araton writes with a reporter’s pen and a friend’s heart, providing great copy while making readers wish they had a Michelle Musler in their life.”—Shelf Awareness

“Harvey Araton is a Hall of Fame sports journalist who has taken his game to new heights with his compelling and heartwarming Our Last Season. This is a beautiful book about basketball and the wonders of being a sports fan. It also tells a delightful story about the power of friendship and the life lessons it can reveal.” —Christine Brennan, author of Best Seat in the House

“A fascinating memoir. . . . This heartwarming look at the life of a friend and die-hard sports fan is effortlessly charming.” —Publishers Weekly, starred review

“Being a fan, at its core, is about believing in something bigger than yourself. This lovely book is about the biggest things to believe in, and some of the best—enduring friendship, unflagging loyalty, and love. In so many losing Knicks seasons, Harvey and Michelle forge a resounding victory—in a bond we can all share.”—Tom Rinaldi, author of The Red Bandanna

“Harvey Araton illuminates why he is the dean of New York sports journalists, navigating readers to the better story hidden inside the bigger story. The Knicks are in their post-glory era when they unite Araton and Michelle Musler. Through the next several decades, they seldom miss a game—he on press row and she in the first row, perched close enough to the bench to hear conversations between players and coaches, and to become Araton’s eyes and ears, his trusted source. As the NBA matured and evolved, so did their unlikely bond. Our Last Season is full of basketball wisdom but on a higher plane captures life’s complexities and the value of what matters much more than the games.”—Jonathan Abrams, author of Boys Among Men

“This is a story about friendship, sports, aging, and ultimately time itself—the things it strips away and the things it cannot touch. I loved it.” —Wright Thompson, author of Pappyland

“As his generation’s signature basketball poet, Harvey Araton artfully writes of how his friendship with a woman even more passionate about the NBA and the Knicks than he is captures the romantic link between the world’s greatest city and the city game. This is Araton in full, career-defining flight, telling a heartwarming and heartbreaking story of compassion and trust, love and loss, and the simple pleasures and pursuits that bind us all.” —Ian O’Connor, author of Belichick and The Captain

“Harvey Araton gives us a gem of a memoir, a paean to a beautiful friendship. Backlit by Madison Square Garden, there is grandeur to it, and intimacy. More than Frazier or Reed, Ewing or Porzingis, it is Michelle Musler, Knicks uberfan, who rises triumphantly from these pages.” —Gary M. Pomerantz, author of The Last Pass