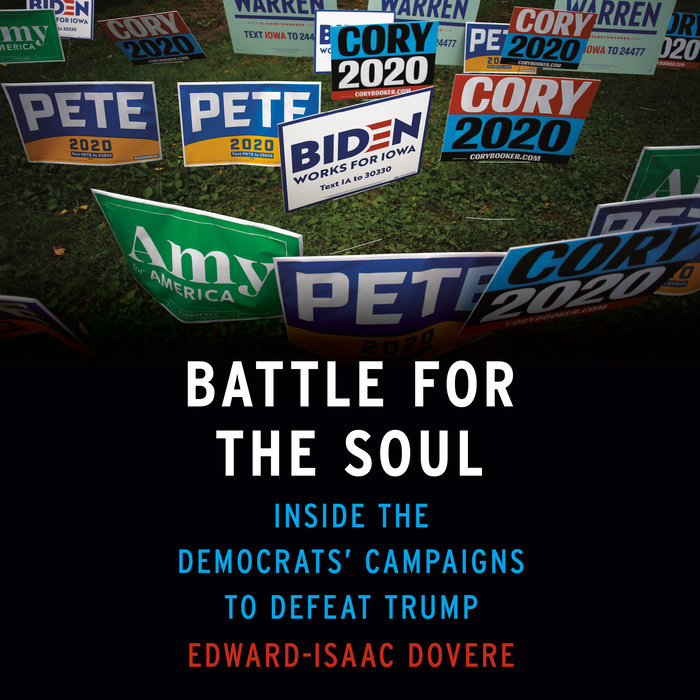 Written by: Edward-Isaac Dovere
Read by: Holter Graham
21 Hours and 56 Minutes Imprint: Penguin Audio Genre: Political Science - Political Process - Political Parties Release Date: May 25, 2021
An award-winning political journalist for The Atlantic tells the inside story of how the embattled Democratic Party, seeking a direction for its future during the Trump years, successfully regained the White House.

The 2020 presidential campaign was a defining moment for America. As Donald Trump and his nativist populism cowed the Republican Party into submission, many Democrats—haunted by Hillary Clinton’s shocking loss in 2016 and the resulting four-year-long identity crisis—were convinced that he would be unbeatable. Their party and the country, it seemed, might never recover.

How, then, did Democrats manage to win the presidency, especially after the longest primary race with the biggest field ever? How did they keep themselves united through an internal struggle between newly empowered progressives and establishment forces—playing out against a pandemic, an economic crisis, and a new racial reckoning?

Edward-Isaac Dovere’s Battle for the Soul is the searing, fly-on-the-wall account of the Democrats’ journey through recalibration and rebirth. Dovere traces this process: from the early days in the wilderness of the post-Obama era to the jockeying of potential candidates; from the backroom battles and exhausting campaigns to the unlikely triumph of the man few expected to win; and on through the inauguration and the insurrection at the Capitol.

Dovere draws on years of on-the-ground reporting and contemporaneous conversations with the key players—whether with Pete Buttigieg in his hotel suite in Des Moines an hour before he won the Iowa caucuses or with Joe Biden in his first-ever interview in the Oval Office—as well as with aides, advisors, and voters. Offering unparalleled access and an insider’s command of the campaign, Battle for the Soul takes a compelling look at the policies, politics, and people, as well as the often absurd process of running for president. This fresh and timely story brings you on the trail, into the private rooms, and along to eavesdrop on critical conversations. You will never see campaigns or this turning point in our history the same way again.

Read More
"In the tradition of Theodore White’s The Making of the President . . . . A riveting account . . . filled with turning point moments. . . . Scenes jump off the page."
—The Washington Post

"Essential reading. . . . Dovere’s first book is informed and granular, filled with up-close quotes and lacerating observations, a must-read for newsrooms and political junkies. . . . Battle for the Soul provides ample warning and plenty of food for thought."
—Lloyd Green, The Guardian

"A wide-ranging history of a tangled campaign."
—Kirkus Reviews

"An incisive and deeply reported portrait of the Democratic party in exile during the Trump presidency . . . . Littered with rich characterizations, wry humor, and impressive insider access."
—Publishers Weekly

"There’s so much in it. It’s so dishy. It’s so fantastic. You’ll learn a lot."
—Julie Mason, SiriusXM

"Candy. . . . Even if you think you know the dynamics, you read a great book like this by a great reporter, and you learn these new things."
—John King, CNN

"It is outstanding. Strongly recommend. I think it is probably the best read of the 2020 campaign. The success of the book is that it doesn’t get bogged down in the horse race, electoral math type thing, but it talks about the personalities, how the personalities drove what happened in an extraordinarily unpredictable campaign."
—Charlie Sykes, The Bulwark

"Highly recommend - it is a dynamite book."
—John Fugelsang, SiriusXM

"The inside campaign details I was craving. . . . Buy the book."
—Dave Weigel, The Washington Post
Read More