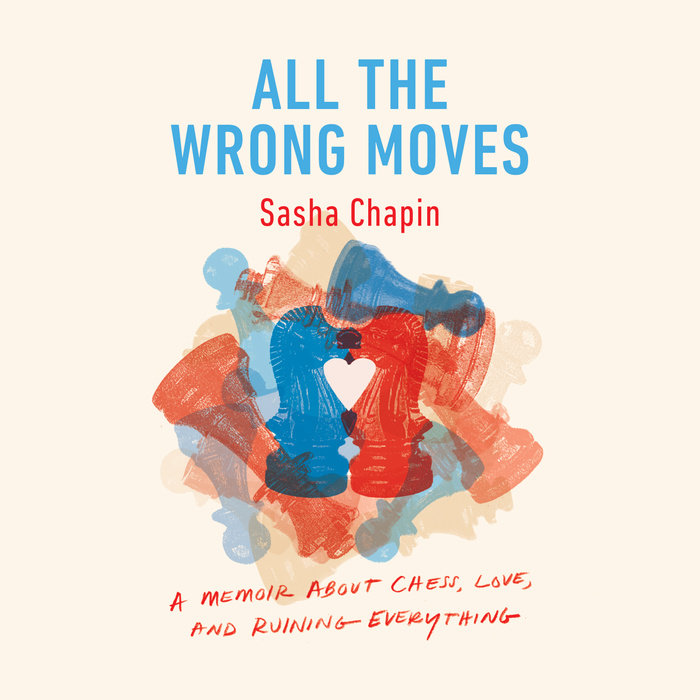 Sasha Chapin is a victim of chess. Like countless amateurs before him--Albert Einstein, Humphrey Bogart, Marcel Duchamp--the game has consumed his life and his mind. First captivated by it as a member of his high school chess club, his passion was rekindled during an accidental encounter with chess hustlers on the streets of Kathmandu. In its aftermath, he forgot how to care about anything else. He played at all hours, for weeks at a time. Like a spurned lover, he tried to move on, but he found the game more seductive the more he resisted it.

And so, he thought, if he can't defeat his obsession, he had to succumb to it.

All the Wrong Moves traces Chapin's rollicking two-year journey around the globe in search of glory. Along the way, he chronicles the highs and lows of his fixation, driven on this quest by lust, terror, and the elusive possibility of victory. Stylish, inventive, and laugh-out-loud funny, All the Wrong Moves is a celebration of the purity, violence, and beauty of the game.
Read More
“The quest memoir is a balky beast. To tame it as well as Canadian journalist Sasha Chapin does in All the Wrong Moves, you’ll need an obscure but preferably universal target of obsession—chess mastery, in his case—a vague discontent with your present existence, a lover or two, a guru and the globe-trotting freedom to pursue your quixotic quarry…. ‘It’s tricky to explain the appeal of chess to someone who doesn’t play,’ Chapin concedes, yet he makes all the right moves in doing just that.”
—Washington Post

“A briskly told coming-of-age memoir…Chapin has a fine eye for the game’s beauty...In the course of his entertaining odyssey, Mr. Chapin offers a Zen-like secret to chess, and to living.”
—Wall Street Journal

“A witty, entertaining memoir about competitive chess and the author’s obsession with same, which takes him around the world, and brings him glory—along with no small number of humiliating defeats.”
—LitHub.com

“Sasha Chapin writes like someone who knows. He knows euphoria. He knows despair. It’s clear that he’s traveled to hell and back, that he is fluent in languages of the heart that have yet to be spoken, and All the Wrong Moves is the brightest light.”
—Bryan Washington, author of Lot: Stories

"A smart, funny, and slyly profound book about the dark ecstasies of obsessive love. Sasha Chapin is a gentlemanly Gonzo, a dirty Bond, and he writes like a dream."
—Claudia Dey, author of Heartbreaker

"All the Wrong Moves is a touching and brilliant portrait of masculinity. Chapin writes with arresting honesty, capturing the manner in which none of us are truly in control of our personalities. He humiliates himself in all the right ways, and the results are luminous and profound and hysterical."
—Heather O’Neill, author of The Lonely Hearts Hotel

“Thoughtful and clever…Chapin’s sincere memoir of self-discovery will charm chess enthusiasts, as well as those searching for their next move in life.”
—Publishers Weekly

“[Chapin] infuses the narrative with exuberant, often funny, anecdotes; glimpses of strategy; and lyrical reflections.... An entertaining portrayal of the esoteric world of chess.”
—Kirkus Reviews

“Wryly funny, introspective, and grimly evocative, Chapin’s memoir is perfect for a brief wade into the world of chess, or as a jumping off point for a much deeper dive.”
—Booklist

"Whether or not you know anything about chess, you’ll be able to relate to Chapin’s quest to find love, excitement, and, above all, his place in the world."
—BookRiot