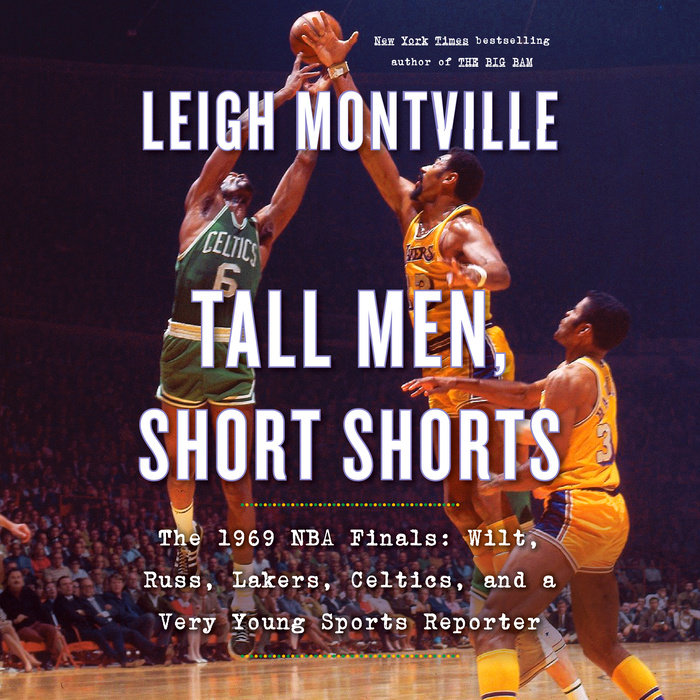 They don’t set up any better than this. The greatest basketball player of all time - Bill Russell - and his juggernaut Boston Celtics, winners of ten (ten!) of the previous twelve NBA championships, squeak through one more playoff run and land in the Finals again. Russell’s opponent? The fearsome 7’1” next-generation superstar, Wilt Chamberlain, recently traded to the LA Lakers to form the league’s first dream team. Bill Russell and John Havlicek versus Chamberlain, Jerry West and Elgin Baylor. The 1969 Celtics are at the end of their dominance. The 1969 Lakers are unstoppable.

Add to the mix one newly minted reporter. Covering the epic series is a wide-eyed young sports writer named Leigh Montville. Years before becoming an award-winning legend himself at The Boston Globe and Sports Illustrated, twenty-four-year-old Montville is ordered by his editor at the Globe to get on a plane to L.A. (first time!) to write about his luminous heroes, the biggest of big men.

What follows is a raucous, colorful, joyous account of one of the greatest seven-game series in NBA history. Set against a backdrop of the late sixties, Montville’s reporting and recollections transport readers to a singular time – with rampant racial tension on the streets and on the court, with the emergence of a still relatively small league on its way to becoming a billion-dollar industry, and to an era when newspaper journalism and the written word served as the crucial lifeline between sports and sports fans. And there was basketball – seven breathtaking, see-saw games, highlight-reel moments from an unprecedented cast of future Hall of Famers (including player-coach Russell as the first-ever black head coach in the NBA), coast-to-coast travels and the clack-clack-clack of typewriter keys racing against tight deadlines.

Tall Men, Short Shorts is a masterpiece of sports journalism with a charming touch of personal memoir. Leigh Montville has crafted his most entertaining book yet, richly enshrining luminous players and moments in a unique American time.

“Montville’s chronicle—both reported and reflective—is part memoir, part sports story. . . Montville takes us through all seven games in a pastiche of newspaper stories, radio accounts and his own reminiscences. It is all remarkably engaging. . . A classic.”
—The Wall Street Journal

“The definitive account of a pivotal season in one of sports’ great rivalries, supplemented by the personal, often hilarious, memories of a generational observer of sports.”
—The Los Angeles Times

“[A] wonderfully told story of a young Montville covering the 1969 Bill Russell vs. Wilt Chamberlain, Celtics vs. Lakers NBA Finals. It’s great storytelling (a Montville staple) and pure fun. Montville brings Boston’s 1969 Boys of Spring to life in spectacular fashion. Take it to the beach. Thank me later.”
—The Boston Globe

“Montville masterfully combines memoir and sports history in this thrilling deep dive into a legendary NBA championship battle. . . In vividly evoking the ups and downs that led to this monumental match-up, Montville paints a humanizing portrait of the game. This is another success for a gifted writer.”
—Publishers Weekly *starred review*

“Montville's deep dive into the storied series is much more than the usual color commentary. . . Montville is a master of context. . . [Tall Men, Short Shorts is] a portrait of a fast-receding time. A thrillingly good blend of sportswriting, pop culture, and history and a must-read for roundball fans.”
—Kirkus Reviews *starred review*

“Thrilling. . . Combining memoir, historical context, and player statistics, [Montville] brings the period to life. Montville’s writing is punchy and hilarious – at times even self-deprecating as he pokes fun at his younger self – but always with an eye on riveting storytelling. Tall Men, Short Shorts is a triumph.”
—Christian Science Monitor

“What a life. What a story. What a writer. Leigh Montville’s Tall Men, Short Shorts is the extraordinarily entertaining account of the distant working days of ‘TBYM’ (The Bright Young Man) who turned sports into poetry on the pages of the Boston Globe. His eye for character, detail and his view of athletes, filled with insight, transformed reports of any game into a novel within a newspaper. This is much more than a book about the art of deadline writing around wins or losses. It’s a literary treasure.”
—Mike Barnicle, MSNBC senior contributor and former Boston Globe columnist

“Leigh Montville is too good a writer to settle for this metaphor but it happens to be true: he belongs on the Mount Rushmore of sports writers from the last 50 years. Part of the reason why is he always seems to be having more fun than anyone else typing at a keyboard. Tall Men, Short Shorts offers first-hand proof that’s always been true, even when the keyboard in question was attached to an Olivetti Lettera 32 typewriter. Maybe especially then.”
—Mike Vaccaro, author of The First Fall Classic and columnist for The New York Post

"No one writes like Leigh Montville, not now, not ever. He’s part prince, part jester. In Tall Men, Short Shorts, a delightful Press Row memoir, he delivers in vivid colors the 1969 NBA Finals: the Celtics and Lakers, Russell and Wilt. The league was young then and is now a colossus.  Montville was the bright young man then and now is wistful, ironic, and perceptive. To the great glory of this book, he was, and still is, our Montville.”
—Gary M. Pomerantz, author of The Last Pass: Cousy, Russell, the Celtics, and What Matters in the End

“Has Leigh Montville ever suffered an off writing effort like the rest of us? If so, he never turned it in. Always matchlessly mesmerizing, his ingenious approach fashioning Tall Men, Short Shorts left it abundantly clear why I didn’t think of it.”
—Peter Vecsey, former NBA columnist and NBC/TNT analyst

"My Dad, bless him, took me to Game Six of the 1969 NBA Finals. Leigh Montville, bless him, has written Tall Men, Short Shorts about that series. Happy as I am to have been there, I am happier still to have read this feathery jumper of a book."
—Mark Feeney, Pulitzer Prize-winning arts writer, The Boston Globe

“Here are two things that perpetually command my attention: the 1969 Boston Celtics and the resplendent prose of author Leigh Montville. What an unexpected pleasure to re-visit both in Tall Men, Short Shorts, a coming of age reminiscence from one of the greatest sports journalists of his generation, eloquently melded as the backdrop to the final chapter of basketball’s most enduring dynasty. Tall Men, Short Shorts serves as an intimate, poignant and occasionally hilarious portal into the storied Celtics-Lakers rivalry – including the scribes, consumed by their own fierce competition, who chronicled them.”
—Jackie MacMullan Boyle, ESPN senior writer/television analyst

“No author is better than Montville when it comes to intimately introducing an audience to the heroes of American sport.”
—Ryen Russillo, host of the Ryen Russillo podcast and former ESPN Radio host

"If this was a collection of Leigh Montville's grocery lists for the past 50 years, I'd read it.  But he's exceeded that; he captures the emerging NBA at full throttle with bold face names on bold face teams. Montville is a national treasure among sportswriters."
—Marty Appel, author of Munson, Casey Stengel and Pinstripe Empire.

“Leigh Montville was beginning his career as the greatest sportswriter of his generation. Bill Russell was ending his run as the greatest champion of all. Montville’s long-awaited memoir of the fortnight they spent bouncing between Boston and Los Angeles in pursuit of the 1969 NBA championship is funny, painful, heartbreaking, inspiring — a story of ambition and nostalgia, and a past that matters every bit as much as the future.”
—Ian Thomsen, author of The Soul of Basketball

“Both a history of that era in NBA history as well as a memoir that captures the no-longer-recognizable sports world of the late ’60s. In this way, it functions as a love letter to the sports media of the past and a time when true literature was the common goal for a new generation of columnists and reporters. . . A unique book that all NBA fans, or those who care about sports writing as a medium, will enjoy.”
—Fansided

“A wonderful bit of autobiographical writing. . . Dynamic and engaging. . . Montville’s memories of those games are as enthralling a snapshot as anything you’ll find in the most meticulously researched work of sports history. . . Clever and compelling. . . A killer basketball book [and] a look back by a remarkable writer. . . I won’t say that this is the best union of subject and author ever, but I’d be hard pressed to name a better one.”
—The Maine Edge

“At once entertaining, educational and self-serving (the latter of which I mean in the best way possible). . . Candidness and wistfulness add to the book’s charm. . . Once again [Montville] shows his unique talent and lighthearted approach to his subject.”
—BookReporter
Read More

On the Podcast: Leigh Montville, Robert Meyer and Dan Koeppel, and Anna Lembke