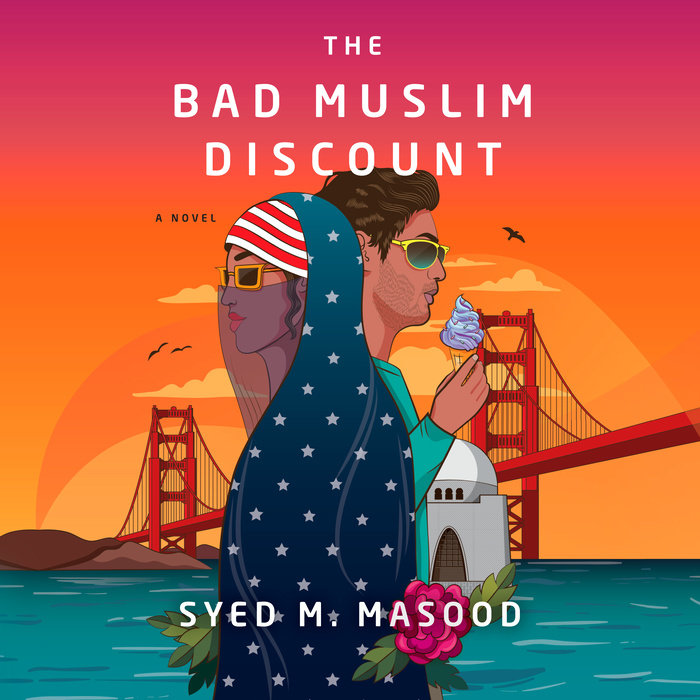 It is 1995, and Anvar Faris is a restless, rebellious, and sharp-tongued boy doing his best to grow up in Karachi, Pakistan. As fundamentalism takes root within the social order and the zealots next door attempt to make Islam great again, his family decides, not quite unanimously, to start life over in California. Ironically, Anvar's deeply devout mother and his model-Muslim brother adjust easily to life in America, while his fun-loving father can't find anyone he relates to. For his part, Anvar fully commits to being a bad Muslim.

At the same time, thousands of miles away, Safwa, a young girl living in war-torn Baghdad with her grief-stricken, conservative father will find a very different and far more dangerous path to America. When Anvar and Safwa's worlds collide as two remarkable, strong-willed adults, their contradictory, intertwined fates will rock their community, and families, to their core.

The Bad Muslim Discount is an irreverent, poignant, and often hysterically funny debut novel by an amazing new voice. With deep insight, warmth, and an irreverent sense of humor, Syed M. Masood examines universal questions of identity, faith (or lack thereof), and belonging through the lens of Muslim Americans.
Read More
"Masood offers sharp observations on religion, violence, and politics, and his clever choice to place the characters’ disparate experiences in parallel challenges Islamophobic stereotypes." The New Yorker

"Take it from a bad Jew, this is one of the bravest and most eye-opening novels of the year. Masood is a whiz at characters and knows the way the world works inside out. A future classic." Gary Shteyngart, New York Times bestselling author of Lake Success

“The Bad Muslim Discount reads like a bingeable TV series — fast-paced and surprising at every turn. As the characters rebel, we root for them, eagerly hoping that they are able to build a life that’s true to them without losing everything they love.” San Francisco Chronicle

"Perfect. . .I was torn between wanting to take my time to savor it, or just blazing through. This is a book that I didn’t know I deeply needed." Buzzfeed

“Syed M. Masood brings something new and necessary to the immigrant story: a sense of humor. Surprising, provocative, and damn funny, The Bad Muslim Discount is the story we always needed but never had.” Neel Patel, author of If You See Me, Don’t Say Hi: Stories

“Masood’s compelling, provocative and hugely enjoyable tragicomedy explores crises of faith and issues of identity, and throws a new light on the immigrant experience.” The National

“Masood’s purpose throughout the novel is to draw you deep into Anvar’s family world, not simply lampoon it — or, in Safwa’s case, righteously condemn it….By its end, “The Bad Muslim Discount” delivers a quintessentially American tale about what immigrants gain or lose when they assimilate — or refuse to do so.” The Seattle Times

“Set in the '90s, this engaging novel about identity and belonging is compelling from cover to cover.” HelloGiggles, “10 Best New Books to Read in February”

“A born storyteller, Masood has crafted a fast-paced page-turner with plenty of insightful commentary on religion, family, love, and national politics in this debut novel that is expertly written and a joy to read; highly recommended.” Library Journal, starred review

“Humorous and heart-warming. . .[Masood takes] us deep into the dynamics of an immigrant Muslim community. . .I feel excited to dive into 2021 knowing that Masood’s biting and thoughtful satire waits for me on the other side.” BookRiot

"[A] sparkling debut novel." The Millions