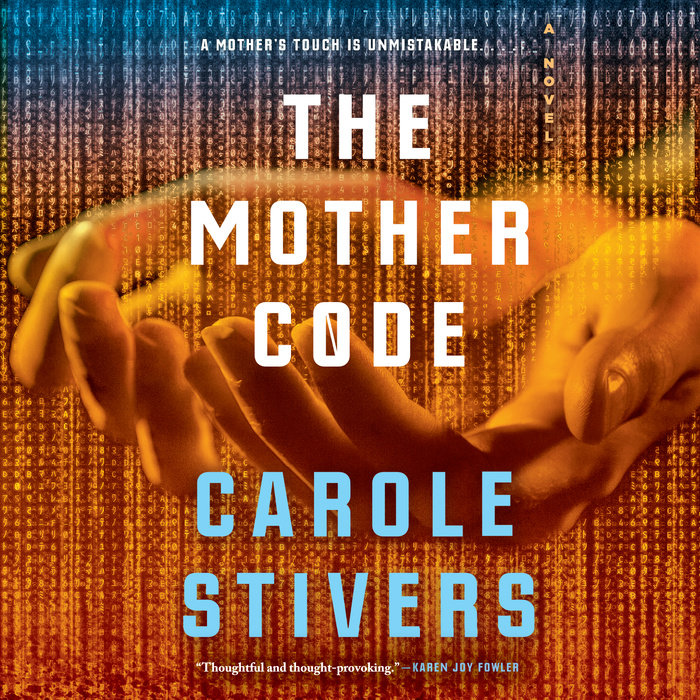 Written by: Carole Stivers
Read by: Soneela Nankani
12 Hours and 26 Minutes Imprint: Penguin Audio Genre: Fiction - Science Fiction - Apocalyptic & Post-Apocalyptic Release Date: August 25, 2020
What it means to be human—and a mother—is put to the test in Carole Stivers’s debut novel set in a world that is more chilling and precarious than ever.

The year is 2049. When a deadly non-viral agent intended for biowarfare spreads out of control, scientists must scramble to ensure the survival of the human race. They turn to their last resort, a plan to place genetically engineered children inside the cocoons of large-scale robots—to be incubated, birthed, and raised by machines. But there is yet one hope of preserving the human order: an intelligence programmed into these machines that renders each unique in its own right—the Mother Code.

Kai is born in America’s desert Southwest, his only companion his robotic Mother, Rho-Z. Equipped with the knowledge and motivations of a human mother, Rho-Z raises Kai and teaches him how to survive. But as children like Kai come of age, their Mothers transform too—in ways that were never predicted. And when government survivors decide that the Mothers must be destroyed, Kai is faced with a choice. Will he break the bond he shares with Rho-Z? Or will he fight to save the only parent he has ever known?

Set in a future that could be our own, The Mother Code explores what truly makes us human—and the tenuous nature of the boundaries between us and the machines we create.
Read More
"Carole Stivers is far from the first to wonder if motherhood can be scientifically replicated, but this is a thoughtful and thought-provoking addition to that meditation.  An end-of-times tale that focuses less on what has been lost and more on what and who might be saved (and how).  Stivers' wonderful story settles right on the line between human and machine, as blame and threat and rescue and love shift from character to character in surprising and powerful ways."—Karen Joy Fowler, New York Times bestselling author of We Are All Completely Beside Ourselves

“Some stories are so unique, yet so universal, that it is wonder they aren’t a part of the human fable already. Carole Stivers’s The Mother Code, is such a novel. Simply written but powerful, chock full of ideas and extrapolations about what it means to be a mother and all that such a word implies. Both apocalyptic, yet hopeful, treat yourself to this story. You’ll be well rewarded.”—James Rollins, New York Times bestselling author of Crucible

"I could not put down The Mother Code ! Part action adventure, part sci-fi, the novel is suspenseful and cinematic and such a pleasure to read. Carole Stivers is a masterful storyteller and she has combined science, technology and history to tell a beautiful story of humanity and love."—Devi S. Laskar, author of The Atlas of Reds and Blues

"Set against a post-pandemic apocalypse, biochemist Carole Stivers’s The Mother Code offers it all: intriguingly flawed characters; compelling action; and, that most elusive of things, a fresh plot—children raised from birth by mother bots. The Mother Code asks us to reimagine the limitations of artificial intelligence and the costs of species survival, and in doing so, offers a profound meditation on motherhood and what it means to be human. Stivers is a brilliant storyteller!"—Lori Ostlund, author of After the Parade

"The Mother Code takes us to the intersection of artificial intelligence and biotechnology and shows us what could go wrong. Carole Stivers has written a chilling tale about the relationship between humans and machines in the not so distant future. It is a prescient story that offers both a good read and a thoughtful way of thinking about a human way to shape the technologies that are reshaping our world."—John Markoff, author of Machines of Loving

“Stivers’ debut novel might be a mashup of P.D. Eastman’s childhood classic ‘Are You My Mother?’ with Kazuo Ishiguro’s breathtaking ‘Never Let Me Go.’”—The San Francisco Chronicle

“An apocalyptic novel revolving around government incompetence and disregard for scientific evidence might seem too on the nose for the current global crisis we are living through, but read this book for its excellent plot, its diverse well-written characters and for the hope that perhaps humans are not entirely terrible.”—Girly Book Club

"Stivers counterbalances her scientific knowledge with excellent storytelling skills, very sturdy and engaging prose, and a raft of eternal themes that underlie the human condition…. Shifting effortlessly from the lab to the printed page, Carole Stivers illustrates that great science fiction must be equal parts test tube and beating maternal heart."—Locus

"Immense and poignant resonance about the vitality and fragility of human lives and relationships and the complexity of human emotional needs."—Book Browse Magazine
Read More