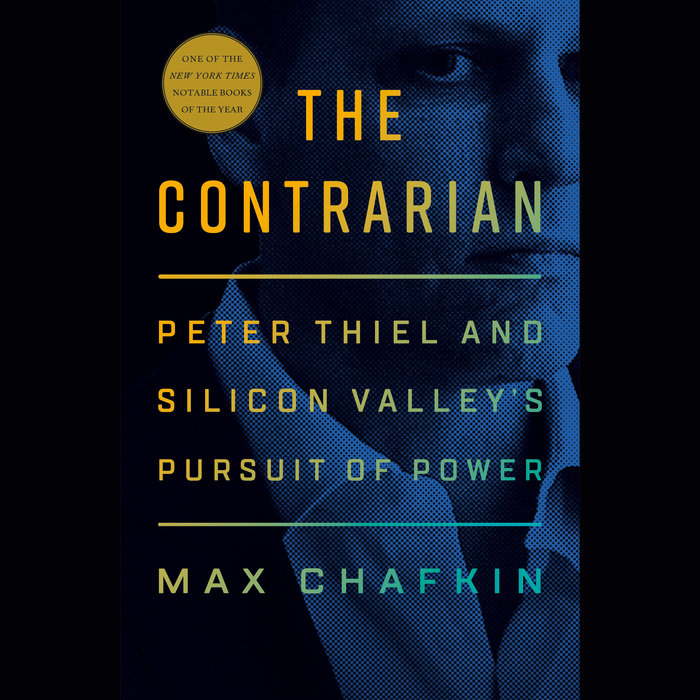 A biography of venture capitalist and entrepreneur Peter Thiel, the enigmatic, controversial, and hugely influential power broker who sits at the dynamic intersection of tech, business, and politics

“Max Chafkin’s The Contrarian is much more than a consistently shocking biography of Peter Thiel, the most important investor in tech and a key supporter of the Donald Trump presidency. It’s also a disturbing history of Silicon Valley that will make you reconsider the ideological foundations of America’s relentless engine of creative destruction.”—Brad Stone, author of The Everything Store and Amazon Unbound

Since the days of the dot-com bubble in the late 1990s, no industry has made a greater impact on the world than Silicon Valley. And few individuals have done more to shape Silicon Valley than Peter Thiel. The billionaire venture capitalist and entrepreneur has been a behind-the-scenes operator influencing countless aspects of our contemporary way of life, from the technologies we use every day to the delicate power balance between Silicon Valley, Wall Street, and Washington. But despite his power and the ubiquity of his projects, no public figure is quite so mysterious.

In the first major biography of Thiel, Max Chafkin traces the trajectory of the innovator's singular life and worldview, from his upbringing as the child of immigrant parents and years at Stanford as a burgeoning conservative thought leader to his founding of PayPal and Palantir, early investment in Facebook and SpaceX, and relationships with fellow tech titans Mark Zuckerberg, Elon Musk, and Eric Schmidt. The Contrarian illuminates the extent to which Thiel has sought to export his values to the corridors of power beyond Silicon Valley, including funding the lawsuit that destroyed the blog Gawker and strenuously backing far-right political candidates, notably Donald Trump for president in 2016.

Eye-opening and deeply reported, The Contrarian is a revelatory biography of a one-of-a-kind leader and an incisive portrait of a tech industry whose explosive growth and power is both thrilling and fraught with controversy.
Read More
“A judicious biography. . . . Unfailing diligent. . . . The Contrarian isn’t just about Thiel; it’s about Silicon Valley’s political coming-of-age, too.” —New York Times

“In writing a biography of Thiel, the deck was stacked against Max Chafkin . . . who daringly took to the task. His new book . . . charts the billionaire’s rise from his early days as a precocious chess champion who never quite fit in to a world-conquering tech visionary and political firebrand.” —Fortune, “The Best Books of 2021”“Peter Thiel is one of tech’s most powerful people and one of its most enigmatic. That’s why Max Chafkin’s new biography of Thiel is so welcome. The Contrarian is a deep study of a Valley anomaly. . . . Chafkin digs deep to help us understand his subject.” —Wired

“Max Chafkin takes a deep dive into the life and history of billionaire entrepreneur and Silicon Valley whisperer Peter Thiel. . . . What’s striking to me about the book is the number of people who chose not to go on the record, out of fear of possible retaliation. A great read if you’re looking to understand the nuances of PayPal’s origin story and Thiel’s contributions to Trump’s 2016 election run.” —Yahoo Finance, “The Best Business Books We Read in 2021”

“Chafkin has assembled a richly detailed portrait of an evasive subject.” —The Baffler

“A sharp and disturbing biography. . . . Chafkin’s chronicle of Thiel’s wild abandon during the Obama years contains some of the most suspenseful passages in the book, as the narrative hurtles toward his acquisition of actual political power. . . . The Contrarian is chilling—literally chilling. As I read it, I grew colder and colder, until I found myself curled up under a blanket on a sunny day, icy and anxious. Scared people are scary, and Chafkin’s masterly evocation of his subject’s galactic fear—of liberals, of the U.S. government, of death—turns Thiel himself into a threat. I tried to tell myself that Thiel is just another rapacious solipsist, in it for the money, but I used to tell myself that about another rapacious solipsist, and he became president.” —The New York Times Book Review

“There are enough juicy details in this portrait of the controversial tech billionaire Peter Thiel to keep you on the hook.” —Vulture

“Max Chafkin’s The Contrarian makes for deeply uncomfortable reading. This meticulous biography of big tech’s leading conservative figure (Thiel was a prominent Trump backer, and spoke at the 2016 Republican convention) is full of moments that would startle those with the hardiest constitutions.” —The Spectator

“Punchy and caustic . . . an engrossing look at one of Silicon Valley’s most eccentric and abrasive figures.” —Publishers Weekly

“[Chafkin] does an excellent job of unpicking the disparate elements of the Thiel mythology. Nothing is quite what it seems.” —London Review of Books

“A revealing portrait. . . . A savvy biography. . . . Chafkin deftly portrays his subject as a ‘calculating operator,’ ‘nihilist,’ and predator who has constructed an image ‘so compelling that it has come to obscure the man behind it.’ A brisk, well-researched life of an enigmatic billionaire.” —Kirkus

“Max Chafkin’s The Contrarian is much more than a consistently shocking biography of Peter Thiel, the most important investor in tech and a key supporter of the Donald Trump presidency. It’s also a disturbing history of Silicon Valley that will make you reconsider the ideological foundations of America’s relentless engine of creative destruction.” —Brad Stone, author of The Everything Store

“The Contrarian is a captivating, incisive, rigorously reported examination of Silicon Valley’s most mysterious and controversial powerbroker. Max Chafkin doesn’t just illuminate the life of Peter Thiel and the unsettling world he has created. With peerless authority, he tells the broader story of our age, showing us how Silicon Valley’s early utopianism was attacked from within, succumbing to largely unseen forces and giving rise to the darker, more dangerous world we inhabit today.” —Joshua Green, author of Devil’s Bargain

“In The Contrarian, Max Chafkin takes us on a fascinating journey into the life and mind of one of the most influential, and least understood, figures in business and politics.” —Sheelah Kolhatkar, author of Black Edge

“Max Chafkin has taken on the daring task of profiling one of the most secretive and powerful men in the history of Silicon Valley. A dogged reporter and an entertaining writer, he weaves an epic tale filled with startling ambition, cold calculation, and a large helping of contrarian—and contradictory—opinions.” —Emily Chang, author of Brotopia

“Whether you admire him or fear him, Peter Thiel’s influence has been undeniable. In this deeply reported and gripping biography, Max Chafkin reveals the lessons behind Thiel’s rise. It offers essential insights for anyone who wants to understand what Silicon Valley’s global ascendance has wrought—and it’s a really great read.” —Charles Duhigg, author of The Power of Habit and Smarter Faster Better
Read More