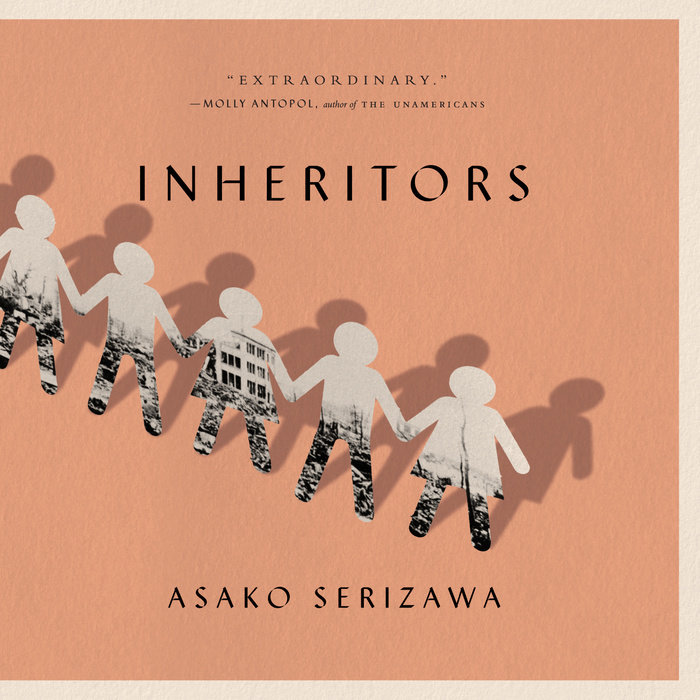 From the O. Henry Prize-winning author comes a heartbreakingly beautiful and brutal exploration of lives fragmented by the Pacific side of World War II.

Spanning more than 150 years, and set in multiple locations in colonial and postcolonial Asia and the United States, Inheritors paints a kaleidoscopic portrait of its characters as they grapple with the legacies of loss, imperialism, and war.

Written from myriad perspectives and in a wide range of styles, each of these interconnected stories is designed to speak to the others, contesting assumptions and illuminating the complicated ways we experience, interpret, and pass on our personal and shared histories. A retired doctor, for example, is forced to confront the horrific moral consequences of his wartime actions. An elderly woman subjects herself to an interview, gradually revealing a fifty-year old murder and its shattering aftermath. And in the last days of a doomed war, a prodigal son who enlisted against his parents' wishes survives the American invasion of his island outpost, only to be asked for a sacrifice more daunting than any he imagined.

Serizawa's characters walk the line between the devastating realities of war and the banal needs of everyday life as they struggle to reconcile their experiences with the changing world. A breathtaking meditation on suppressed histories and the relationship between history, memory, and storytelling, Inheritors stands in the company of Lisa Ko, Viet Thanh Nguyen, and Min Jin Lee.

This audiobook contains a PDF family tree from the text.
Read More
Named a NYPL, Bustle, and Library Journal best book of the year and a most anticipated book of 2020 by Amazon, Electric Lit, & Chicago Review of Books

"Ambitious...Gripping...Serizawa’s fiction is convincingly rooted in the intimate, yet still provocatively collective, quandaries of her characters."
—The New York Times Book Review

"Stunning and visceral...Serizawa's brave storytelling gives us more than an epic arc. She creates a narrative that is in and of itself a multidimensional space. As well, it's an homage to the surreal artistry of writers like Jorge Luis Borges — whose voice she manages to honor with a story which is not an echo but her own capacious, original illumination."
—NPR, Morning Edition

“Serizawa’s ability to weave complex histories into the personal experiences of her characters proves that life is anything but linear.”
—The Boston Globe

"Throughout the book, the characters display a remarkable capacity to analyze not just their own responses to the circumstances of war, but how their situations fit within wider, often global, conversations about power, domination, and race. Rarely do they reach any sort of reconciliation...Although their predicaments are based in a Japanese setting, they speak to much of what happens elsewhere in contemporary Asia, where even recent conflicts are consigned to history."
—New York Review of Books

"Inheritors reveals an author of fierce intellect looking at war legacies from this angle and that, working her way into their nuances. By deconstructing the toolkit of the novel, Serizawa dodges the inevitability of a war narrative to offer a wistful hope or a melodramatic tragedy. Instead, she creates a more powerful form in which she can align the pieces to magnify each other like the lenses of a telescope. This powerful, intelligent book stands in the company of William T. Vollman and W.G. Sebald and their investigations of life during wartime or in the long shadow after. But the tone, the structure, and the territory are all Serizawa’s, in a book that deserves to become a crucial pillar in the literature of war."
—Kenyon Review

“Powerful tales of men and women struck by war; in Serizawa’s stories, war has no winners."
—Asian Review of Books

“These stories by Asako Serizawa are tremendous, intimate, startling and essential; they show us how the past is so often the most powerful force in what we idly call the present.”
—Rivka Galchen, author of Little Labors

“An extraordinary book—beautifully crafted, emotionally resonant and profoundly moving. Asako Serizawa imbues her characters with so much depth and generosity that I felt as if I were reading about people I already knew and loved. An intensely powerful book by a writer with endless talent.”
—Molly Antopol, author of The UnAmericans

"This splendid story collection is a sword through the heart. Asako Serizawa depicts with rare acuity and nuance several generations of one far-flung family as it's buffeted by the forces of war, migration, displacement, and that ultimate crucible, time. There are no easy answers or clean resolutions in Serizawa's stories, but what you will find is the genuine stuff of human experience, rendered with precision and honesty.  Inheritors is debut fiction delivered with the verve of a master."
—Ben Fountain, author of Billy Lynn’s Long Halftime Walk

“I was struck again and again not only by the remarkable scope and multiplicity of Inheritors but by the voices Serizawa inhabits—each is so distinct and yet wonderfully intimate. A book to be savored, slowly, overflowing with lifeblood and endurance.”
—Peter Orner, author of Maggie Brown & Others

"Stunning...With beautiful lyrical prose, Serizawa presents a powerful and heartbreaking look into the ways war, colonization, and loss affect not only the survivors, but the generations that inherit these stories."
—Booklist