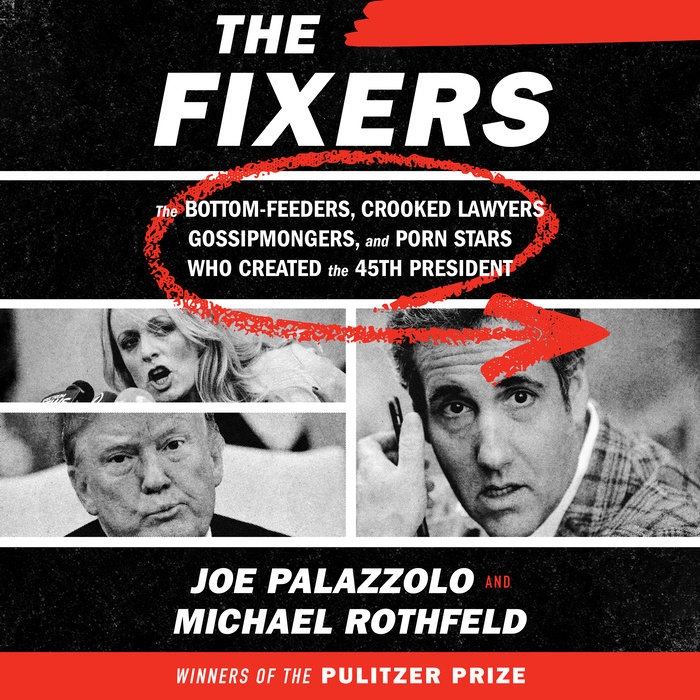 In The Fixers, Joe Palazzolo and Michael Rothfeld have produced a deeply reported and exquisitely drawn portrait of that world, full of secret phone calls, hidden texts, and desperate deals, unearthing the practice of “catch and kill” by which Trump surrogates paid hush money to cover up his affairs, and detailing Trump’s historic relationship with his fixers—from his early, influential relationship with Roy Cohn to his reliance on Michael Cohen, National Enquirer publisher David Pecker, and former New York mayor Rudy Giuliani. It traces the arc of their interactions from the 1970s through the 2016 campaign and beyond. It is a distinctly American saga that navigates the worlds of reality TV, cash-for-trash tabloids, single-shingle law shops, celebrity bashes, high-end real estate, pornography, and politics. The characters and settings of this book are part of a vulgar circus that crisscrosses the country, from New York to L.A. to D.C.

Terrifying, darkly comic, and compulsively readable, The Fixers is an epic political adventure in which greed, corruption, lust, and ambition collide, and that leads, ultimately, to the White House.

Advance praise for The Fixers

“Of the dozens of books chronicling Donald Trump’s presidency, The Fixers is destined to sit atop the pile. It has everything you look for in a political page-turner: Colorful characters, intrigue, sex, corruption and—unlike much of the Trump canon—meticulous, factual reporting by two ace reporters. What a read!”—John Carreyrou, New York Times bestselling author of Bad Blood
Read More
“Yes, we know Donald Trump thinks and acts and lives like a gangster. But these two first-rate investigative reporters portray in depth and in vivid detail what that means and how that works. The Fixers is like a riveting modern true-life sequel to Sweet Smell of Success, terrific nonfiction noir with stupendously high stakes.”—Kurt Andersen, New York Times bestselling author of Fantasyland: How America Went Haywire: A 500-Year History

“Anyone interested in the seedy and fascinating intersection of money, sex, media, power, and the law that has threatened to topple the Trump presidency should drink in every sentence of The Fixers. It’s deeply engaging, built upon hard-won and deft reporting, and written with grace and authority, and it offers a series of indelible portraits of all of the opportunists and scammers who got their hooks into the White House.”—Timothy L. O’Brien, author of TrumpNation: The Art of Being the Donald
Read More