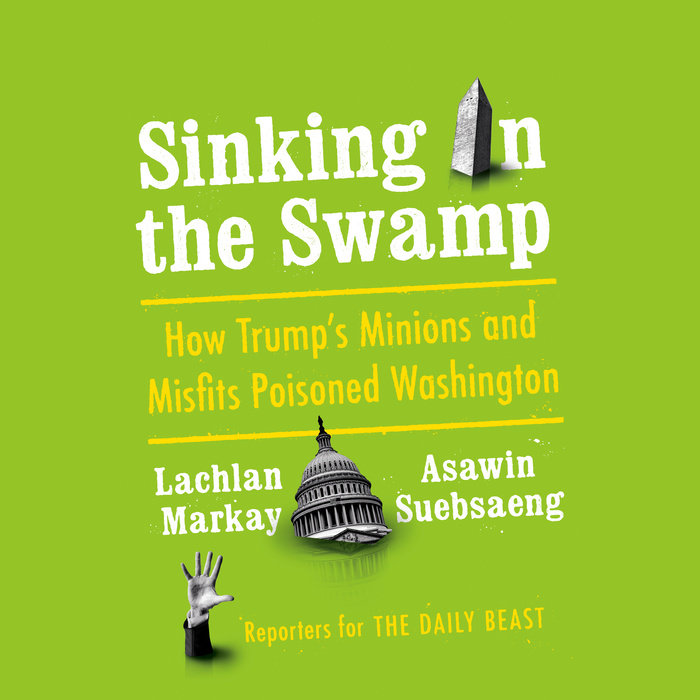 Two of Washington's most meddlesome reporters take readers on a deep dive into the murky underworld of President Trump's Washington, dishing the hilarious and frightening dirt on the charlatans, conspiracy theorists, ideologues, and run-of-the-mill con artists who have infected the highest echelons of American political power.

For the past three years, reporting from the White House, the Trump hotel, and other dens of intrigue and influence, Lachlan Markay and Asawin Suebsaeng have revealed the sordid shenanigans of a rogue's gallery of Trumpworld incompetents and improbable A-listers -- earning them angry denunciations (or at least some vexed side-eye) from Trumpists such as the actor Jon Voight and Trump's former campaign czar and renowned obfuscator Corey Lewandowski as well as requisite threats of physical violence and ruin. Sinking in the Swamp will similarly pull no punches. Everyone from assorted Trump family members to Stephen Miller, Sean Hannity, and Diamond & Silk to Trumpworld's even more obscure accomplices will be plumbed, prodded, and exposed for their roles in the most shambolic moment in modern American political history. When they go low, Swin and Lachlan are right there with them, recorders running and notebooks at the ready.

Sinking in the Swamp is an uncompromising account of the financial and moral degradation of our capital, told with righteous indignation and through the lens of key power players and foot soldiers whose own antics have often escaped the notice of the overworked press corps.

As the 2020 election approaches, this page-turning, letting-it-all-hang-out narrative shows how the nation got to this nadir, tracing the story back to years before Trump's improbable run for the White House and cataloguing the stomach-turning moments that followed.
Read More
"It almost reads like if Hunter S. Thompson wrote a true crime book about politics.”—Business Insider

“A dishy takedown of the mediocrities, charlatans, and grifters populating the corridors of power in D.C. .  . . Markay and Suebsaeng are so breathless that it's like reading Kenneth Anger's Hollywood Babylon after a healthy diet of Peter Biskind and David Thomson . . . Readers who can't get enough dirt on Trump and associates will revel in it.”—Kirkus Reviews