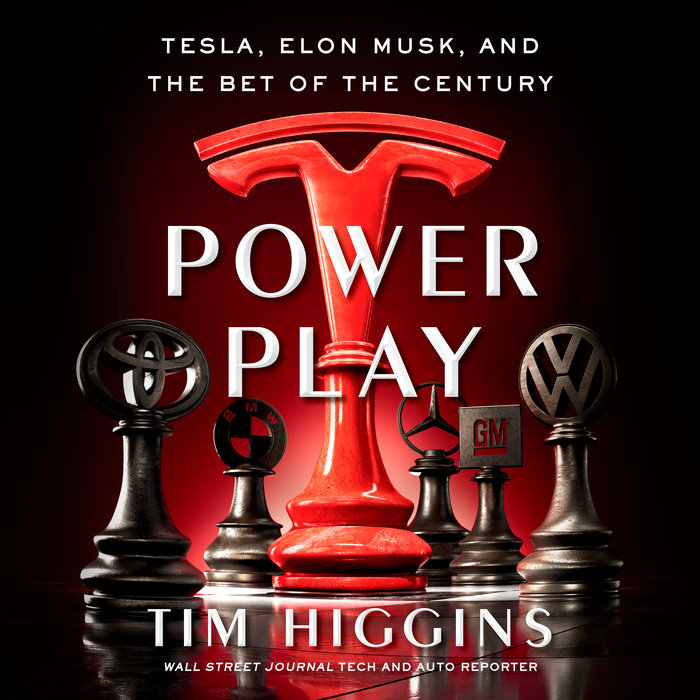 Tesla is the envy of the automotive world.  Born at the start of the millennium, it was the first car company to be valued at $1 trillion.  Its CEO, the mercurial, charismatic Elon Musk has become not just a celebrity but the richest man in the world.

But Tesla’s success was far from guaranteed. Founded in the 2000s, the company was built on an audacious vision. Musk and a small band of Silicon Valley engineers set out to make a car that was quicker, sexier, smoother, and cleaner than any gas-guzzler on the road. Tesla would undergo a hellish fifteen years, beset by rivals—pressured by investors, hobbled by whistleblowers. Musk often found himself in the public’s crosshairs, threatening to bring down the company he had helped build.

Wall Street Journal tech and auto reporter Tim Higgins had a front-row seat for the drama: the pileups, breakdowns, and the unlikeliest outcome of all, success. A story of impossible wagers and unlikely triumphs, Power Play is an exhilarating look at how a team of innovators beat the odds—and changed the future.
Read More
“[A] sweeping history of the electric-car juggernaut…I’ve covered Tesla as a reporter since 2016. When Higgins writes about facts and situations I’m familiar with, I can attest he’s right on the button, every time.”
—Los Angeles Times

"Tim Higgins’s compelling and deeply reported history of Tesla addresses the essential question of how this upstart automaker came from nowhere to become one of the most valuable companies on Earth...An exceptional work of business journalism."
—Washington Post

“Higgins, who covers technology and autos for the Wall Street Journal, has done an outstanding job. He's performed a deep dive into the nuts and volts of Tesla. His book is extensively researched, including interviews with (unfortunately but understandably) anonymous current and former execs.”
—Minneapolis Star Tribune

“Richly detailed…Higgins manages to deliver an evenhanded account that brings us up to date from Ashlee Vance’s 2015 biography of Musk—the prior definitive Tesla account—and has a more urgent feel, given everything that has happened the past few years.”
—The Information

“[Power Play] eschews sensationalism for a high-resolution portrait of how exactly an unusual man and an unusual company managed a meteoric rise…. The tale of Tesla's ascent is inherently dramatic and compellingly told.”
—NPR.org

"Eminently readable…A must-read for any fan or critic."
—Business Insider

“Higgins has written entertainingly about the financial Bet of the Century…[He] is exemplary in describing many of these extraordinary machinations. He has interviewed hundreds of people associated with Tesla, both past and present. He knows the financial story like the back of his hand.”
—The Times (UK)

"A masterclass in narrative journalism, telling the extraordinary story of Tesla's rise to become one of the most fascinating companies of the 21st century, with inside-the-room detail and color that give it a cinematic feel."
—Bradley Hope, New York Times bestselling co-author of Billion Dollar Whale

"Tim Higgins’s electric narrative takes us through Tesla’s every hairpin turn.... This case study on the thin line between madness and genius is set against a monumental backdrop: the rivalry between Silicon Valley and Detroit to develop and popularize the electric car. Having covered the industry from both locales, Higgins is uniquely equipped to lucidly and colorfully explain why the former triumphed—and how it is that an impossible person can ultimately will an improbable success."
—John Helyar, #1 New York Times bestselling co-author of Barbarians at the Gate

"No matter how you slice it, the story of Elon Musk and Tesla is a riveting one. In Power Play, Tim Higgins also makes the tale of Musk and Tesla compulsively readable, to say nothing of lively, fun and insightful!”
—William D. Cohan, New York Times bestselling author of House of Cards

“Tim Higgins's portrait of Tesla in Power Play is simultaneously inspirational and troubling, revealing Elon Musk's risky scrambles to invent the future he's constantly promising to deliver. Through the tales of Tesla's frequent near-death experiences and executive firings, readers benefit from Higgins's depth of reporting in both Silicon Valley and Detroit.”
—Sarah Frier, award-winning author of No Filter: The Inside Story of Instagram

“Effectively combines [Higgins’s] well-honed journalistic skills with revealing perspectives from industry observers, frustrated Tesla staff, futuristic engineers, and Musk himself, creating a spirited report on a company consistently embroiled in a swirl of melodrama and controversy....Readers fascinated by the hype of Tesla history will find a gold mine of facts and foibles in this immersive analysis.”
—Kirkus Reviews

"A well-documented and comprehensive look at Tesla, Elon Musk, and the people involved with its creation and successes."
—Library Journal

"A riveting saga...Power Play reads like a novel."
—The Free Lance–Star
Read More