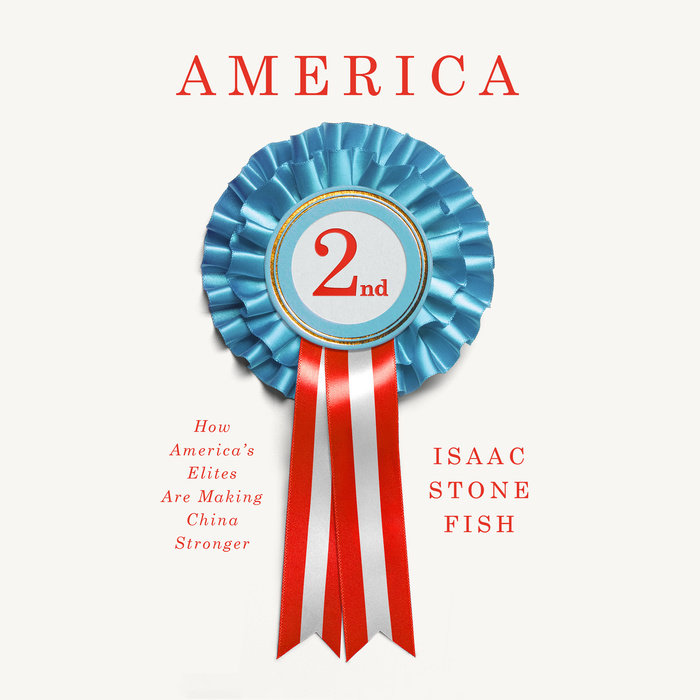 The past few years have seen relations between China and the United States shift, from enthusiastic economic partners, to wary frenemies, to open rivals. Americans have been slow to wake up to the challenges posed by the Chinese Communist Party. Why did this happen? And what can we do about it?

In America Second, Isaac Stone Fish traces the evolution of the Party’s influence in America. He shows how America’s leaders initially welcomed China’s entry into the U.S. economy, believing that trade and engagement would lead to a more democratic China. And he explains how—although this belief has proved misguided--many of our businesspeople and politicians have become too dependent on China to challenge it.

America Second exposes a deep network of Beijing’s influence in America, built quietly over the years through prominent figures like former secretaries of state Henry Kissinger and Madeleine Albright, Disney chairman Bob Iger, and members of the Bush family. And it shows how to fight that influence–without being paranoid, xenophobic, or racist. This is an authoritative and important story of corruption and good intentions gone wrong, with serious implications not only for the future of the United States, but for the world at large.

Read More
"Fish’s book...raises the very important topic of why we continue to trust many of America’s grandest foreign policy figures (people like Henry Kissinger and Madeleine Albright) on China, when they and many others have been paid rich salaries by the Party (or companies associated with it) for consulting work in their private lives. It’s a thorny and important question, tackled in a non-xenophobic way by a veteran foreign correspondent in China."
—Rana Foroohar, Financial Times

"[America Second] is a carefully researched, self-aware and often funny account of how China has built its influence in the US."
—Gideon Rachman, Financial Times

"A scorching denunciation of U.S. leaders who serve Chinese interests... Whether in academia or business, China has exerted so much influence, Stone Fish concludes, that American elites exercise strict self-censorship when it comes to criticizing China—a dictator’s dream, if an exercise in self-serving cowardice. An eye-opening look at the behind-the-scenes sway China holds over so much of the U.S. economy."
—Kirkus

"[A] stinging exposé... Written in tart prose that pulls no punches, Fish’s persuasive investigation reveals a morass of corruption and sycophancy that has worrisome geopolitical implications. Readers will be alarmed.”
—Publishers Weekly

"Here is what the movers, shakers, and China 'experts' (and Henry Kissinger) would rather you not know about their backs and forths with the Communist Party of China over the past fifty years.  America second?  Quite.  And what is first?  Principle, truth, and empathy or hypocrisy, maneuver, and greed?  No book shows the answer more clearly.”
–Perry Link, Professor Emeritus of East Asian Studies, Princeton University

"Isaac Stone Fish’s candor and self-reflection drives his cautionary tale about the perils of self-censorship, rationalization, and accommodation. He has built a powerful case against sacrificing the truth in pursuit of success in China."
—Evan Osnos, author of Age of Ambition

“This fascinating book concludes that the best lobbyists for the Chinese Communist Party in the US have not been its propagandists, or even PR agents hired to do its bidding, but self-justifying American businessmen drawn to China by the promise of its vast markets. What’s most troubling is that, given the thoroughness of Stone Fish’s research, it’s not easy to argue with his conclusion.”
—Orville Schell, Director, the Center on US-China Relations at the Asia Society
Read More