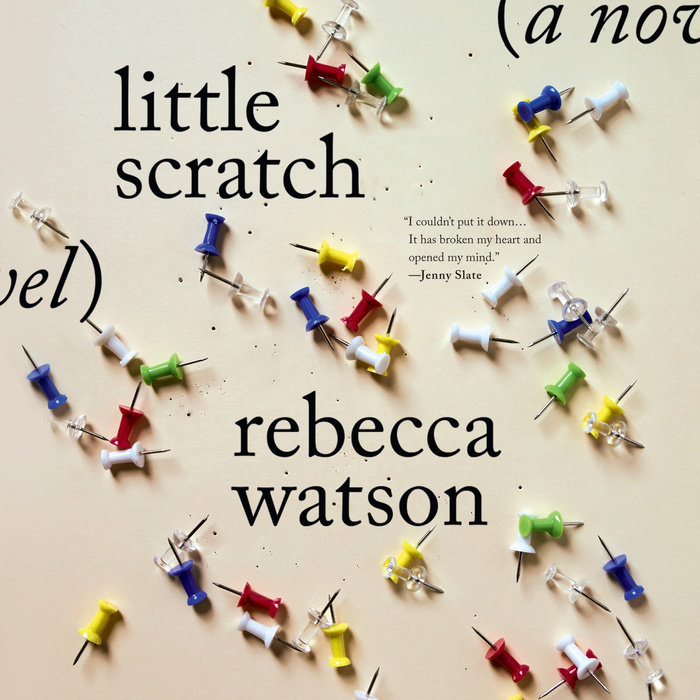 In the formally innovative tradition of Grief Is the Thing with Feathers and Ducks, Newburyport comes a dazzlingly original, shot-in-the-arm of a debut that reveals a young woman's every thought over the course of one deceptively ordinary day.

She wakes up, goes to work. Watches the clock and checks her phone. But underneath this monotony there's something else going on: something under her skin.

Relayed in interweaving columns that chart the feedback loop of memory, the senses, and modern distractions with wit and precision, our narrator becomes increasingly anxious as the day moves on: Is she overusing the heart emoji? Isn't drinking eight glasses of water a day supposed to fix everything? Why is the etiquette of the women's bathroom so fraught? How does she define rape? And why can't she stop scratching?

Fiercely moving and slyly profound, little scratch is a defiantly playful look at how our minds function in--and survive--the darkest moments.
Read More
"Reading little scratch has broken my heart and opened my mind. It is a daring display of experience that persists and persists and never loses its light." —Jenny Slate, New York Times bestselling author of Little Weirds

"Technology is affecting the way we think, and Rebecca Watson’s little scratch is a novel that captures this. . . Watson lets the words flow, jumbled and urgent as our thoughts are, like Kerouac and his scrolls . . .This isn’t a long book; that’s part of how the author is able to pull it off. . .But it charms. The book’s unconventional strategy fell away as I read; I cared about the narrator as one does a well-drawn character. She scratches at her skin throughout the book, and eventually I felt it."—The New Republic

"Watson depicts her protagonist’s consciousness by way of striking formal structures, using typographical tricks to illustrate the cacophonous complexity of inner life. . . While this could be distracting, or even indulgent, in lesser hands, Watson’s experiments serve to both deepen our immersion and reify the buried pain at the novel’s center. . . little scratch absorbs the more fragmented forms of attention and makes of them something rich, assured and sad."—New York Times Book Review

"[The protagonist is] funny and relatable . . . [T]he writing is economical. It’s a quick read. It takes a regular day and renders it irregularly, interestingly. It presents grief, violence, self-harm and self-doubt in an unusual fashion, driving home just how disorienting and destabilizing these forces can be. It is of the #MeToo era, tackling both catcallers and unrepentant predators, but exists on a plane all its own."—Washington Post

"[little scratch] is a powerful debut from Financial Times journalist Watson, making her one of the year's best new writers to watch."—Bustle

“I was immediately enveloped in the staccato of little scratch, which spun between wry, funny and heartbreaking. It captures beautifully a rhythm not just of trauma, but also of the small, defiant, everyday happinesses that push through and against it.” —Sophie Mackintosh, author of The Water Cure and Blue Ticket

"Rebecca Watson's little scratch is an immersive experience, an exhilarating plunge into the mundanity and the horror and the mundane horror of a day in a life that is not quite right. It's experimental in the best sense of the word: Watson bends form to accommodate a narrator who wants desperately to communicate but cannot quite bring herself to speak."—Miranda Popkey, author of Topics of Conversation

"An inventive, immersive debut... Watson’s clever convention and set pieces are not simply flourishes but integral to the plot and themes... A haunting, virtuosic performance."—Publishers Weekly, *Starred Review*

"One of the most captivating books of the year...A revolutionary #MeToo tale focusing less on the act of trauma than the impossible task of healing, little scratch is a challenging work of experimental fiction."—Shelf Awareness

"Formally daring and unique, the novel’s structure mirrors the ways the woman’s mind jumps from mundane moments to the life-changing ones."—The Millions

"The unnamed narrator of this debut novel is an Everywoman...The physical form of the narrative reproduces the experience of the woman's scattered thoughts... which overlap, interrupt each other, merge, and battle in the saturated “now” of the book’s overwhelming immediacy. The result is an unusual reading experience which relates both the mundane and the revelatory...A daring book whose innovations are balanced by the sad familiarity of its pain."—Kirkus Review

"Witty, defiant, tender… what a book!"—Olivia Sudjic, author of Sympathy and Exposure

"Reads like the cinders settling in the air after an explosion... daring and completely readable."—Colin Barrett, author of Young Skins

"Rebecca Watson's little scratch voraciously captures our life... Watson uses language with a sniper's precision to target and capture the million little re-calibrations of the self that a young woman has to undertake in order to go from one day to the next. . . It is a story that is urgent. It is a story that needs to be told."—Meena Kandasamy, author of When I Hit You