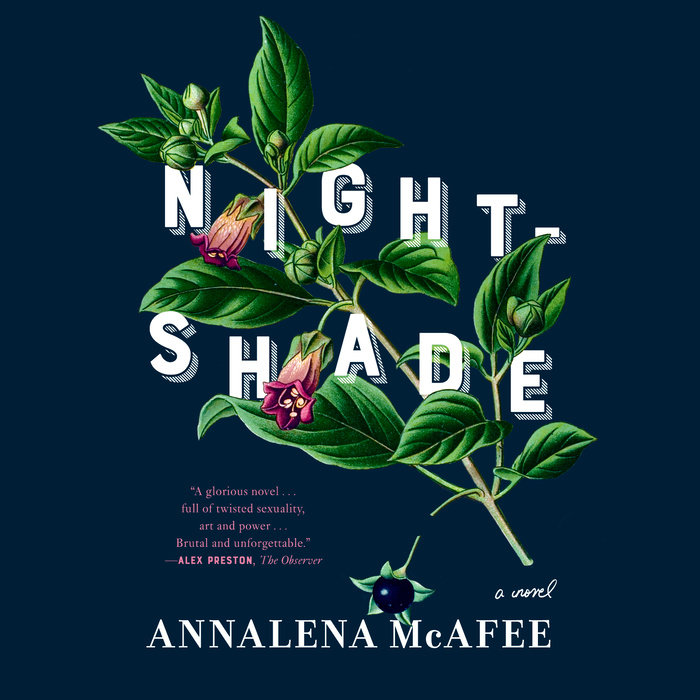 Written by: Annalena McAfee
Read by: Jane Maud
9 Hours and 35 Minutes Imprint: Random House Audio Genre: Fiction - Literary Release Date: August 18, 2020
A lean, taut novel about an artist—a painter—at the height of her career, about the art world, about love, fidelity, fame, betrayal, and the large choices and prices paid in the quest for art for art's sake. By the much-admired author of The Spoiler ("cutting wit and razor-sharp writing"—NYTBR; "a dark, sparkly gem of a book"—Christopher Buckley) and Hame ("I couldn't put it down"—Patrick McGrath).

Eve Laing, celebrated artist, once the muse of legendary painter and "monstre sacré" Florian Kiš, is a photorealist painter of flowers at the peak of her career, with her work in international galleries and museums.

Now Eve is embarking on her most ambitious work to date—seven enormous, elaborate panels of the world's deadliest plants. In psychic preparation, she has taken a wrecking ball to her opulent high-wire life, jettisoning her marriage for a beautiful young lover, a drifter half her age, who seems to share her single-minded artistic vision. As the novel opens out, Eve is on a late-night walk through London, setting out from her former family home in the well-heeled west of the city, back to her studio, a converted factory in the grittier east, where her recently completed masterpiece hangs and where a fatal reckoning may await. . . . Eve makes her way through the city and reflects on her life today and as it was years ago, and considers the large choices she has made and their repercussions. As she walks, she summons up her wild art college days in London; her New York years as a tyro artist; her vicious rivalry with her college roommate, now a celebrated figure on the international conceptual art scene whose full-blown success and recognition still infuriates and rankles Eve's sense of rightness with the world. And as she weighs what's been gained and what's been lost in pursuit of her art, a sense of dread settles over her, one she cannot shake, and as Nightshade moves to its dark, shocking end, it explores large questions--about ambition . . . artistic truth . . . betrayal . . . about bad people making good art . . . about the consequences of fame . . . and the devastating price of love.
Read More
“Fabulously, uncomfortably observant . . . McAfee’s prose is lyrical yet sharp, and her descriptions of both the method and the intricately researched work itself are superbly convincing . . . The novel fascinates . . . Vastly satisfying.”
—Joanna Briscoe, The Guardian (UK)

“Brilliant and biting. . . . Nightshade, which tells the story of a botanical artist reckoning with her legacy over the course of a single night, induces sympathy for its viperish protagonist—and then well and truly twists the knife.”
—Financial Times (UK)

“A magnificent and taut evocation of the passage of time, the meaning of fidelity and trust, and the prices paid in love and friendship in service of one’s art, Nightshade is a breathtaking, extraordinary exploration of the cost of art for its own sake.”
—Avenue Magazine

“Instilling this literary thriller with intimations of menace and death, McAfee follows Eve on a rainy winter evening as her life falls apart. From the posh street outside her former home she watches her “starchitect” husband, Kristof, with his new girlfriend. . . . An immersive depiction of the painting process and an intimate, thought-provoking portrait of the cost of staying true to an artistic vision, especially for a woman.”
—Booklist

“Caustically entertaining. . . . A pleasing investigation of the limits of artistic influence.”
—Publishers Weekly