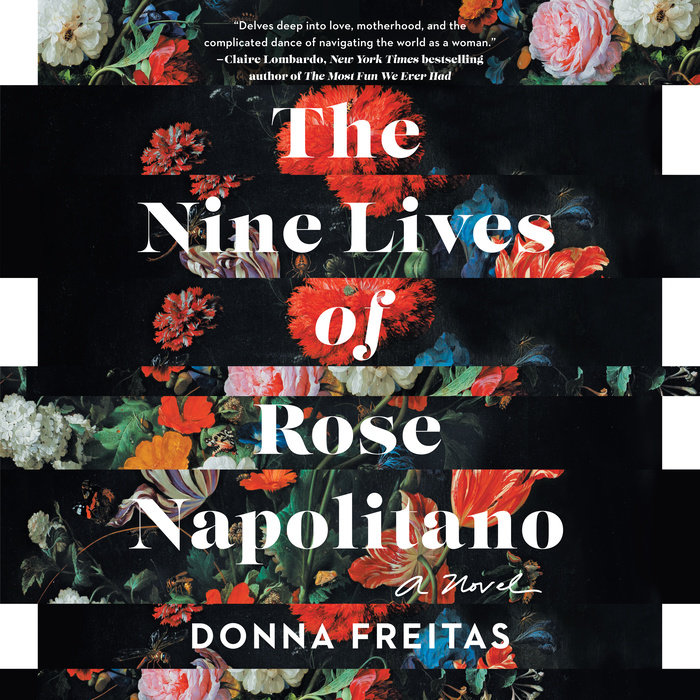 Written by: Donna Freitas
Read by: Kristen Sieh
9 Hours and 7 Minutes Imprint: Penguin Audio Genre: Fiction - Women Release Date: April 06, 2021
“A powerful exploration of motherhood and feminism… this novel will have readers examining their own ‘what-ifs.’” — Jill Santopolo, New York Times bestselling author of Everything After

“[An] inventive novel about love, loss, identity, and compromise.”—Woman's Day

“Delves deep into love, motherhood, and the complicated dance that is navigating the world as a woman.” — Claire Lombardo, New York Times bestselling author of The Most Fun We Ever Had


Rose Napolitano is fighting with her husband, Luke, about prenatal vitamins. She promised she’d take them, but didn’t. He promised before they got married that he’d never want children, but now he’s changed his mind. Their marriage has come to rest on this one question: Can Rose find it in herself to become a mother? Rose is a successful professor and academic. She's never wanted to have a child. The fight ends, and with it their marriage.

But then, Rose has a fight with Luke about the vitamins—again. This time the fight goes slightly differently, and so does Rose’s future as she grapples with whether she can indeed give up the one thing she thought she knew about herself. Can she reimagine her life in a completely new way? That reimagining plays out again and again in each of Rose’s nine lives, just as it does for each of us as we grow into adulthood. What are the consequences of our biggest choices? How would life change if we let go of our preconceived ideas of ourselves and became someone completely new? Rose Napolitano’s experience of choosing and then choosing again shows us in an utterly compelling way what it means, literally, to reinvent a life and, sometimes, become a different kind of woman than we ever imagined.

“Freitas’s prose is engaging and precise, and her what-if format proves ideal for elegantly unpacking the tensions of the plot. She balances tightly written scenes of confrontation with Rose’s poignant reflections on how much she can compromise without losing herself completely. This isn’t one to miss.”
—Publishers Weekly (starred)

“Reminiscent of Kate Atkinson’s Life After Life or the movie Sliding Doors, Freitas’s novel explores nine (but certainly not all) possible outcomes when a woman who has never wanted children marries a man who gradually decides he does….Following the maze of numbered takes becomes an addictive game, highly literate escapism, like watching The Queen’s Gambit….Highly readable and provocative.”
—Kirkus Reviews (starred)

“Fans of Kate Atkinson’s Life After Life, Liane Moriarty’s What Alice Forgot, and the film Sliding Doors will find themselves happily lost in this charming, heartfelt, thought-provoking novel.”
—Booklist (starred)

“A serious yet fantastical look at relationships, family, and feminism told in a unique voice, and book groups should take note. The closest read-alikes are Life After Life by Kate Atkinson and Replay by Ken Grimwood.”
—Library Journal (starred)

“Many of us have had that moment where we wondered what might happen if we took a different path. Rose is adamant that she doesn’t want to be a mother, but then she caves to save her relationship. But what if she makes a different choice? In this inventive novel about love, loss, identity, and compromise, we get to find out.”
—Woman's Day

“Ambitious, compelling, and provocative, The Nine Lives of Rose Napolitano delves deep into love, motherhood, and the complicated dance that is navigating the world as a woman—its intricate structure kept me turning pages and the questions posed therein kept me awake at night.”
— Claire Lombardo, New York Times bestselling author of The Most Fun We Ever Had

“A structurally ambitious, deeply thoughtful, and even-handed consideration of many of the most complex decisions women make about their families and futures—not to mention a generally wise meditation on the control we all do and don't have over our fates.”
— Linda Holmes, host of NPR's Pop Culture Happy Hour and New York Times bestselling author of Evvie Drake Starts Over

“In a powerful exploration of motherhood and feminism, Donna Freitas probes the ties that bind us all to one another through love, through obligation and through choice. At once thought-provoking and emotionally moving, this novel will have readers examining their own relationships and their own ‘what-ifs.’”
— Jill Santopolo, New York Times bestselling author of The Light We Lost and Everything After

“Donna Freitas brilliantly unfurls from every angle one of the most urgent questions of a woman’s life, motherhood, creating a dazzling kaleidoscope of love, pain and possibility. The Nine Lives of Rose Napolitano is a page-turner, a novel that is impossible to put down.”
— Martha McPhee, National Book Award finalist and author of An Elegant Woman

“In captivating Sliding Doors-style, we’re offered an intimate glimpse into the nine different lives of one woman as she struggles to define womanhood. Riveting, astute and brazenly honest, The Nine Lives of Rose Napolitano has left an indelible mark—I won't soon forget it.”
— Karma Brown, bestselling author of Recipe for a Perfect Wife

“Sometimes the right book finds you at the perfect time, and that's exactly what happened in the case of The Nine Lives of Rose Napolitano. I read this novel in one greedy gulp. It brilliantly turns the prism on what it means to be a woman: More than the sum of our joys and pains, we are also etched with the roads not taken and opportunities lost. The Nine Lives of Rose Napolitano is a trenchant portrait of womanhood, and everything I look for in a novel: intimate, thought-provoking, and terribly moving.”
— Lauren Mechling, author of How Could She

“This book is so good.  I spent a day completely ignoring my family while I finished it.  The only downside was I cried at the playground. But, really, who hasn’t?”
— Emily Oster, New York Times bestselling author of Cribsheet

“Donna Freitas writes about the mysteries surrounding motherhood and the choice to remain childless with disarming directness and feeling. This is a thought-provoking, absorbing book.”
— René Steinke, author of Friendswood

“Nine choices, nine fates, one woman. Donna Freitas takes a woman’s most intimate decision and casts a refracting light on the pressures, regrets, and joys that can accompany it. With crystalline prose that crackles with wit and emotional intensity, she reveals how a woman’s effort to be true to her own choices can be a struggle that requires not only everything she has, but everything she might become. Starkly honest, absorbing, and wholly original.”
— Judy Blundell, bestselling author of The High Season and What I Saw and How I Lied
Read More