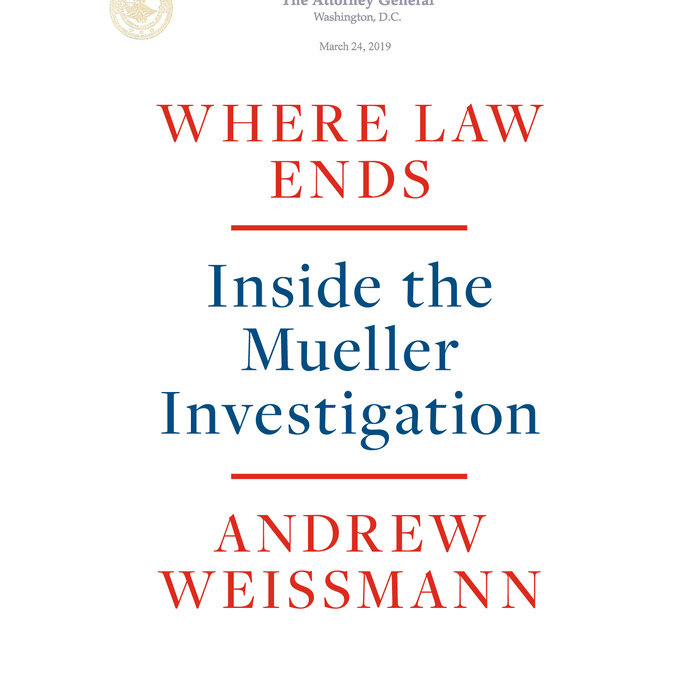 Written by: Andrew Weissmann
Read by: George Newbern & Andrew Weissmann
14 Hours and 9 Minutes Imprint: Random House Audio Genre: Political Science - American Government - Executive Branch Release Date: September 29, 2020
NEW YORK TIMES BESTSELLER • In the first and only inside account of the Mueller investigation, one of the special counsel’s most trusted prosecutors breaks his silence on the team’s history-making search for the truth, their painstaking deliberations and costly mistakes, and Trump’s unprecedented efforts to stifle their report.

In May 2017, Robert Mueller was tapped to lead an inquiry into Russian interference in the 2016 presidential election, coordination by foreign agents with Donald Trump’s campaign, and obstruction of justice by the president. Mueller assembled a “dream team” of top prosecutors, and for the next twenty-two months, the investigation was a black box and the subject of endless anticipation and speculation—until April 2019, when the special counsel’s report was released.

In Where Law Ends, legendary prosecutor Andrew Weissmann—a key player in the Special Counsel’s Office—finally pulls back the curtain to reveal exactly what went on inside the investigation, including the heated debates, painful deliberations, and mistakes of the team—not to mention the external efforts by the president and Attorney General William Barr to manipulate the investigation to their political ends.

Weissmann puts the reader in the room as Mueller’s team made their most consequential decisions, such as whether to subpoena the president, whether to conduct a full financial investigation of Trump, and whether to explicitly recommend obstruction charges against him. Weissmann also details for the first time the debilitating effects that President Trump himself had on the investigation, through his dangling of pardons and his constant threats to shut down the inquiry and fire Mueller, which left the team racing against the clock and essentially fighting with one hand tied behind their backs.

In Where Law Ends, Weissmann conjures the camaraderie and esprit de corps of the investigative units led by the enigmatic Mueller, a distinguished public servant who is revealed here, in a way we have never seen him before, as a manager, a colleague, and a very human presence. Weissmann is as candid about the team’s mistakes as he is about its successes, and is committed to accurately documenting the historic investigation for future generations to assess and learn from. Ultimately, Where Law Ends is a story about a team of public servants, dedicated to the rule of law, tasked with investigating a president who did everything he could to stand in their way.
Read More
“Where Law Ends burns like an old-fashioned 150-watt bulb, delivering light and heat in equal measure. . . . Where Law Ends is a gift—a clarifying piece of history, wrapped up in our era’s boundless anger and suspicion.”—Devlin Barrett, The Washington Post

“Unlike the other Trump books that get hyped as ‘explosive,’ this one lays out its case so patiently that its conclusions arrive not with a bang but with a snap—the click of an indictment falling into place. . . . Weissmann’s book is a fascinating document—a candid mea culpa, a riveting true-crime story, that’s nonetheless presented in the measured prose of someone who remains a stalwart institutionalist.”—Jennifer Szalai, The New York Times

“A damning indictment of a ‘lawless’ president.”—George Packer, The Atlantic

“A lucid and engrossing insider's look at Special Counsel Robert Mueller’s inquiry into Russian meddling in the 2016 election . . . an essential record of what the Mueller investigation proved and why it failed to bring Trump down.”—Publishers Weekly
Read More

Election 2020: Audiobooks that Go Behind the HeadlinesDeep Dive Into the News Cycle: Current Events for September 2020