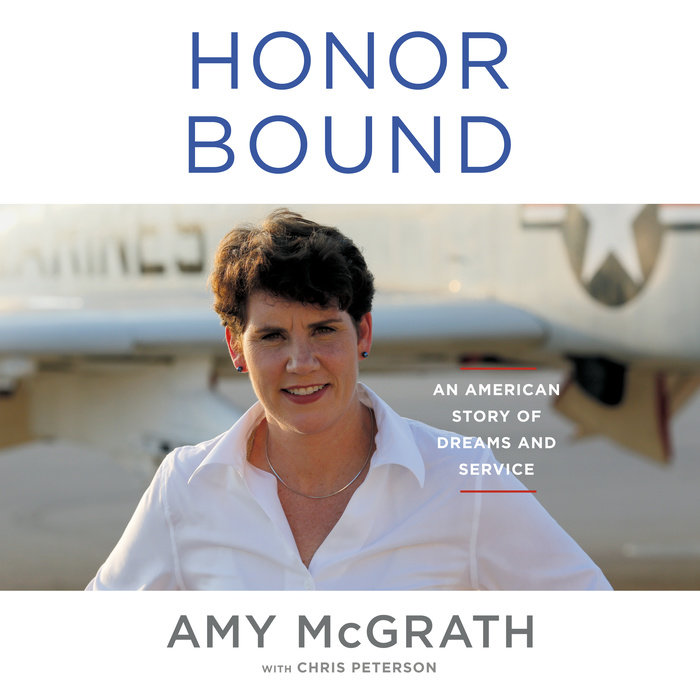 Written by: Amy McGrath & Chris Peterson
Read by: Amy McGrath
8 Hours and 39 Minutes Imprint: Random House Audio Genre: Biography & Autobiography - Political Release Date: August 03, 2021
The inspiring story of the first female Marine to fly a combat mission in an F/A-18—and the transformative events that led to her bold decision to take on the most powerful man in the U.S. Senate.

Amy McGrath grew up in Edgewood, Kentucky, a childhood shaped by love of country, baseball (the Cincinnati Reds), and, from the age of twelve, a fascination with fighter jets. Her devastation at learning that a federal law prohibited women from flying in combat fueled her determination to do just that--and then, to help change the laws to improve the lives of all Americans.

McGrath writes of gaining an appointment in high school to the U.S. Naval Academy, making it through Marine Corps training, graduating from Annapolis, Maryland, becoming a Second Lieutenant, and raising her right hand to swear to defend the U.S. Constitution, honor bound.

She vividly recounts her experiences flying in the Marines, and her combat deployments to Iraq (Kuwait) and Afghanistan, her work as an Air Combat Tactics instructor—and what it was like to finally fly that fighter jet: high-speed, intense, and physically demanding.

Here is McGrath, training to do the most intense tactical flying there is (think the Navy's TOPGUN ); meeting the man who would become her husband; being promoted to major and then lieutenant colonel; marrying, having three children, a career and life in Washington and then moving her family back to Kentucky to begin a whole new chapter in politics; her roller-coaster congressional campaign (she lost by three percentage points); and making the tough decision to run again, in an even bigger, higher-stakes national campaign, against the five-term leader of the U.S. Senate, Mitch McConnell.

A moving, inspiring American story of courage, determination, and large dreams.
Read More
“Although few people have lived the exciting and adventurous life that Amy has, her experiences are completely relatable for many Americans. As girls we were told there was no limit to what we could accomplish, only to realize as we came of age there were still significant roadblocks in our path—and through her memoir, Honor Bound, we get to go on that journey together of struggle and triumph. Amy has continued to take a phrase we learned at the Academy to heart: any challenge is simply ‘another opportunity to excel,’ and she certainly has and has inspired all of us in the process.”—Representative Mikie Sherrill (NJ-11)

“One of the most compelling stories of modern military service and leadership by example, this book is guaranteed to inspire every American to live lives of service. Amy’s story is an example to us all about living with true American values in an extremely partisan and less than honorable political time in our country’s history. She truly is my hero!”—General John Allen, U.S. Marine Corps (ret.), former commander of the NATO International Security Assistance Force (ISAF) and U.S. Forces in Afghanistan

“Lieutenant Colonel Amy McGrath, whose first call sign was ‘Guns’, lays out in her candid and compelling book what it takes to swing for the fences, bust down barriers, and serve with honor.”—Rye Barcott, author of It Happened on the Way to War; co-founder and CEO, With Honor

“If what binds us together as Americans is a common dream, Amy McGrath’s story is a contribution to that dream. Her service to this country—as a Marine fighter pilot and political leader—is a testament to all that we, as a nation of dreamers, can accomplish both individually and collectively. Her tenacity in finding a way where none existed before serves as an example to us all.”—Elliot Ackerman, best-selling author of 2034, A Novel of the Next World War

“A must-read for anyone who’s ever refused to take no for an answer. Amy McGrath takes you on her unforgettable journey from dreaming of being a combat aviator as a young girl when women weren’t yet allowed, to flying missions in Iraq and Afghanistan. Honor Bound is a remarkable ‘sea story’ of a life of service to country. Her voice and unique perspective are essential to re-imaging the next generation of leaders in America.”—Admiral James Stavridis, U.S. Navy (ret.), author and Former Supreme Allied Commander NATO and dean emeritus of the Fletcher School of Law and Diplomacy at Tufts University

“Amy McGrath’s is a great American story. Rarely have I met someone with such drive, tenacity, and accomplishments—and yet, in equal measure, kindness and decency and humility. For a troubled time in our nation, she is the just the inspiration we need—and her story, recounted here in brilliant and engaging prose, is a great message for young and old, Democrats and Republicans, men and women, soldiers and sailors (and Marines!), and all other Americans who would like a breath of fresh air and a dose of hope for our future.”—Michael O’Hanlon, Senior Fellow at Brookings, author of The Art of War in an Age of Peace: U.S. Grand Strategy and Resolute Restraint
Read More