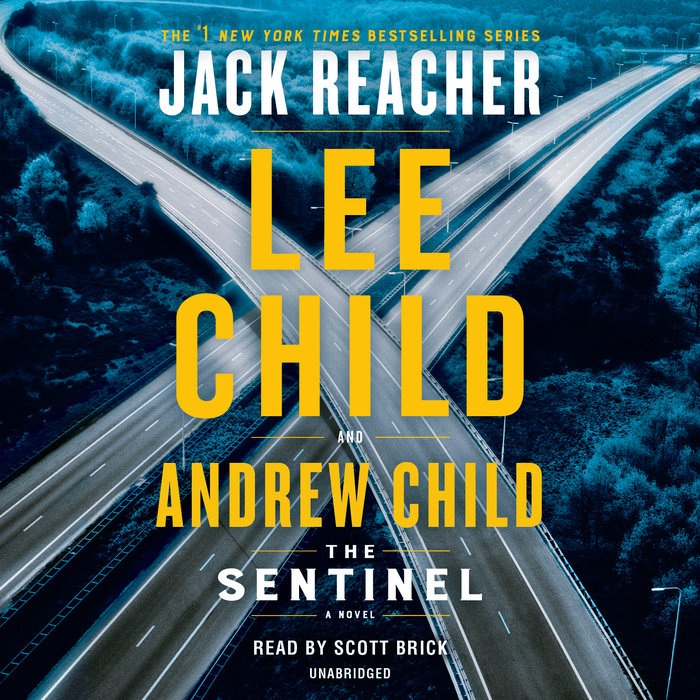 “One of the many great things about Jack Reacher is that he’s larger than life while remaining relatable and believable. The Sentinel shows that two Childs are even better than one.”—James Patterson

As always, Reacher has no particular place to go, and all the time in the world to get there. One morning he ends up in a town near Pleasantville, Tennessee.

But there’s nothing pleasant about the place.

In broad daylight Reacher spots a hapless soul walking into an ambush. “It was four against one” . . . so Reacher intervenes, with his own trademark brand of conflict resolution.

The man he saves is Rusty Rutherford, an unassuming IT manager, recently fired after a cyberattack locked up the town’s data, records, information . . . and secrets. Rutherford wants to stay put, look innocent, and clear his name.

Reacher is intrigued. There’s more to the story. The bad guys who jumped Rutherford are part of something serious and deadly, involving a conspiracy, a cover-up, and murder—all centered on a mousy little guy in a coffee-stained shirt who has no idea what he’s up against.

Rule one: if you don’t know the trouble you’re in, keep Reacher by your side.
Read More
“I loved The Sentinel! Classic Reacher, great story. Brilliant, brilliant, brilliant. I do love the spare writing style, the descriptions, Reacher’s responses to threats. Joyous stuff. I hope there will be many more Reachers to come.”—Conn Iggulden

“It’s great to be back in [Reacher’s] company in a world where the bad guys get what’s coming to them. . . . A smooth transition for a much-loved character.”—The Observer

“As always, the bad guys—this time, Russian spies and American-Nazi thugs—discover too late that they are no match for Reacher. Despite the change in authors, the writing remains tight and the non-stop action is as propulsive as ever.”—Associated Press

“As ever, [Reacher is] the sole, unrivalled champion of the average man.”—Daily Mail

“Fresh, perfectly plotted, and packed with action, The Sentinel is one of the year’s best, must-read thrillers.”—The Real Book Spy

“It’s terrific. . . . The story is just as powerful. . . . Brutal action mixes with keen-eyed detective work as Reacher metes out his own brand of justice. . . . If this novel is a harbinger of what’s to come, then Jack is in good hands.”—Booklist (starred review)

“Much of The Sentinel is humorous as Reacher patiently teaches bad guys about the flaws in their tactics. While there’s lots of action, the novel also feels like a procedural as Reacher interviews suspects and delves deeper toward the truth. . . . [The Sentinel has] one of the most inventive action sequences in recent memory. . . . It continues the series without any sense that there’s now a coauthor. In a year of drastic change, fans will welcome the consistency.”—Publishers Weekly