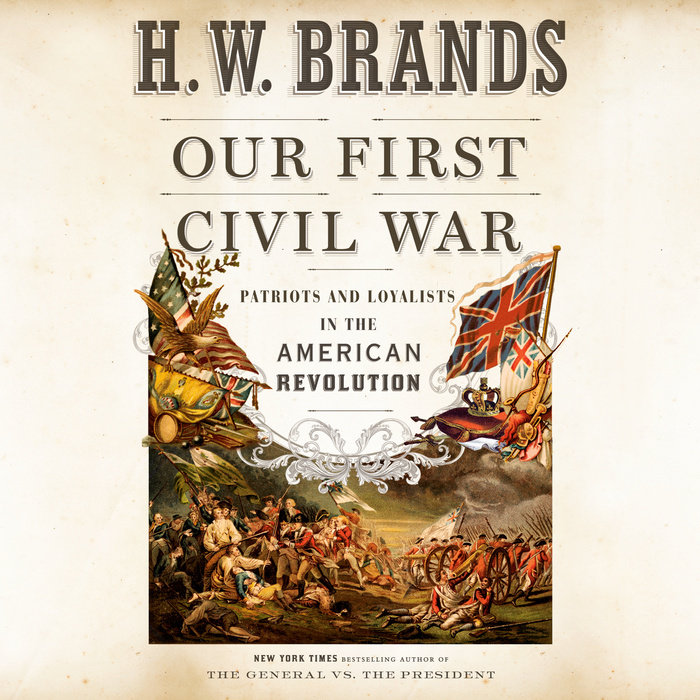 Written by: H. W. Brands
Read by: Steve Hendrickson
16 Hours and 31 Minutes Imprint: Random House Audio Genre: History - United States - Revolutionary Period (1775-1800) Release Date: November 09, 2021
“Americans tend to forget that we have always been at war with one another—even in the beginning…. Brands tells the story of the American Revolution as it really unfolded—as a civil war between colonial patriots and those loyal to the British Crown and Parliament. Division, Brands reminds us, is as American as unity.” —Jon Meacham, Pulitzer Prize-winning author of His Truth Is Marching On

From best-selling historian and Pulitzer Prize finalist H. W. Brands comes a gripping, page-turning narrative of the American Revolution that shows it to be more than a fight against the British: it was also a violent battle among neighbors forced to choose sides, Loyalist or Patriot.

What causes people to forsake their country and take arms against it? What prompts their neighbors, hardly distinguishable in station or success, to defend that country against the rebels?  That is the question H. W. Brands answers in his powerful new history of the American Revolution.

George Washington and Benjamin Franklin were the unlikeliest of rebels. Washington in the 1770s stood at the apex of Virginia society. Franklin was more successful still, having risen from humble origins to world fame. John Adams might have seemed a more obvious candidate for rebellion, being of cantankerous temperament. Even so, he revered the law. Yet all three men became rebels against the British Empire that fostered their success.

Others in the same circle of family and friends chose differently. William Franklin might have been expected to join his father, Benjamin, in rebellion but remained loyal to the British. So did Thomas Hutchinson, a royal governor and friend of the Franklins, and Joseph Galloway, an early challenger to the Crown. They soon heard themselves denounced as traitors--for not having betrayed the country where they grew up. Native Americans and the enslaved were also forced to choose sides as civil war broke out around them.

After the Revolution, the Patriots were cast as heroes and founding fathers while the Loyalists were relegated to bit parts best forgotten. Our First Civil War reminds us that before America could win its revolution against Britain, the Patriots had to win a bitter civil war against family, neighbors, and friends.
Read More
A History Book Club Main Selection

“Americans tend to forget that we have always been at war with one another—even in the beginning. In this splendid new book, H. W. Brands tells the story of the American Revolution as it really unfolded—as a civil war between colonial patriots and those loyal to the British Crown and Parliament. Division, Brands reminds us, is as American as unity.”
--Jon Meacham, Pulitzer Prize-winning author of His Truth Is Marching On: John Lewis and the Power of Hope

“H.W. Brands’ Our First Civil War is a sleek, riveting one-volume account of the American Revolution that speaks compellingly to our current age of division and discord. A bravura performance by one of our great historical storytellers.”
--Nathaniel Philbrick, author of Travels with George: In Search of Washington and His Legacy and In the Heart of the Sea, winner of the National Book Award

“Was the Revolution truly a ‘civil war’ at heart? And what was the role of the many tens of thousands of everyday Loyalists whose presence made it potentially so? . . . Brands provides a brisk, engaging narrative history of the Revolution itself [and] ensure[s] that an oft-overlooked part of the American Revolution receives its due.”
--The Wall Street Journal

“In Our First Civil War, the prolific historian H. W. Brands places the battle between the Patriots and the often-ignored Loyalists at the center of the story. The result is a view of the Revolution as a fight of ‘one American against another’. . . In these pages are several challenges to the standard American revolution narrative. We see Washington super-sensitive about his reputation and military acumen. We discover that Britain was willing to reach an early negotiated peace to the conflict. We find that the threat of mutiny, especially among Pennsylvanians, was more serious than sometimes rendered. And while the facile telling of the Tory story has northerners fleeing to Canada, Brands sets forth the depth of the Southern resistance to the rebels, particularly in the Carolinas.”
--The Boston Globe

"A fast-paced, often riveting account of the military and political events leading up to the Declaration of Independence and those that followed during the war. . . Brands does his readers a service by reminding them that division, as much as unity, is central to the founding of our nation.”
--The Washington Post

“Compelling. . . Brands pays special attention to the frontier, where the web of conflicts was incredibly complex. . . [and] provides lucid explanations of the tricky politics in play. . . During this deeply polarized time, it’s good to be reminded that the unity essential to creating American identity was achieved at great cost. Division has been with us from the start.”
--Christian Science Monitor

“Brands delivers a page-turning account of the [Revolutionary War]. . . Gripping prose and lucid explanations of the period’s complex politics make this an essential reconsideration of the Revolutionary era."
--Publishers Weekly (starred review)

“Brands shows how fraught and complicated [the Revolution] was for the generation that lived through it, a perspective well worth considering amid our current divisions.”
--BookPage (starred review)

“Instead of discussing the Revolutionary War’s causes, political philosophies, or military details, Brand presents the motivations, relationships, and actions of its participants, in their own words. . . This engaging book, which includes often-neglected Indigenous and Black perspectives of the war, reads like the story of a contentious extended family, as opposed to a traditional military history.”
--Library Journal (starred review)

“An engaging, provocative look at the American Revolution and the largely forgotten battle lines it drew within the colonies: dividing neighbors, families, and communities. . . The American Revolution is often taught as a great swelling of popular unrest, but Brands shows how fine the distinctions were, and how the build-up toward war tore societies apart and created resentments and differences that would be passed down through generations.”
--CrimeReads

"An expert account . . . A skillful traditional history of the American Revolution that pays more than the usual attention to its American opponents."
--Kirkus