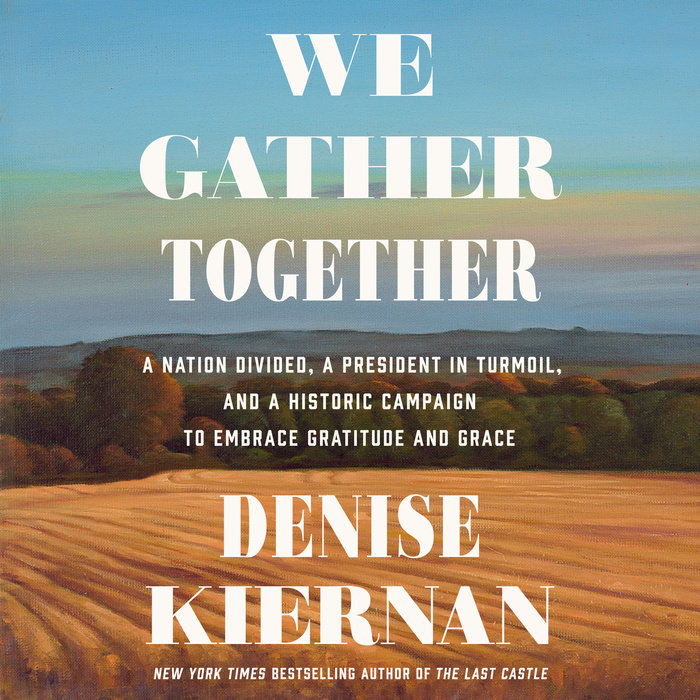 Written by: Denise Kiernan
Read by: Denise Kiernan
7 Hours and 16 Minutes Imprint: Penguin Audio Genre: History - United States - Civil War Period (1850-1877) Release Date: November 10, 2020
From the New York Times bestselling author of The Last Castle and The Girls of Atomic City comes a new way to look at American history through the story of giving thanks.

From Ancient Rome through 21st-century America, bestselling author Denise Kiernan brings us a biography of an idea: gratitude, as a compelling human instinct and a global concept, more than just a mere holiday. Spanning centuries, We Gather Together is anchored amid the strife of the Civil War, and driven by the fascinating story of Sarah Josepha Hale, a widowed mother with no formal schooling who became one of the 19th century’s most influential tastemakers and who campaigned for decades to make real an annual day of thanks.

Populated by an enthralling supporting cast of characters including Frederick Douglass, Abraham Lincoln, Sojourner Truth, Walt Whitman, Norman Rockwell, and others, We Gather Together is ultimately a story of tenacity and dedication, an inspiring tale of how imperfect people in challenging times can create powerful legacies.

Working at the helm of one of the most widely read magazines in the nation, Hale published Edgar Allan Poe, Nathaniel Hawthorne, Harriet Beecher Stowe, and others, while introducing American readers to such newfangled concepts as “domestic science,” white wedding gowns, and the Christmas tree. A prolific writer, Hale penned novels, recipe books, essays and more, including the ubiquitous children’s poem, “Mary Had a Little Lamb.” And Hale herself never stopped pushing the leaders of her time, in pursuit of her goal.

The man who finally granted her wish about a national “thanksgiving” was Lincoln, the president of the war-torn nation in which Hale would never have the right to vote.

Illuminating, wildly discussable, part myth-busting, part call to action, We Gather Together is full of unexpected delights and uneasy truths. The stories of indigenous peoples, immigrant communities, women’s rights activists, abolitionists, and more, will inspire readers to rethink and reclaim what it means to give thanks in this day and age. The book’s message of gratitude—especially when embraced during the hardest of times—makes it one to read and share, over and over, at any time of year.
Read More
Praise for We Gather Together:

“We Gather Together reminds us of the importance of gratitude in our own lives, especially during our darkest hours. It uncovers the profound ways in which a seemingly simple holiday has helped shape American history and how it has brought solace during times of upheaval and loss. Kiernan reminds us of the healing power of gratitude."—Kate Andersen Brower, #1 New York Times bestselling author of The Residence and Team of Five

“As a researcher, Denise Kiernan is skilled at finding the lost moments of our national conscience; as a writer, she is brilliant at explaining why these moments matter. Only a writer of Kiernan's ability can cut through great swaths of history to locate the germinating seed of a national movement that is still moving us.”—Wiley Cash, New York Times bestselling author of The Last Ballad and A Land More Kind Than Home

“We Gather Together is a surprising and enlightening gem of a book that reexamines the history of one of America’s most beloved traditions. With her trademark wit, verve, and impeccable research, Denise Kiernan brings to full and vibrant life the characters and conflicts surrounding America’s day of gratitude, and shows us how we might all reclaim its stirring power.”—Karen Abbott, New York Times bestselling author of The Ghosts of Eden Park and Liar, Temptress, Soldier, Spy

"It might seem hard to imagine it now: a U.S. president and a newspaper editor conspiring to create a day of national unity. Kiernan brings to vivid life this forgotten tale of a ground-breaking female journalist finding her voice and her cause, despite heartache and hardship. This is the story of how our secular American holiday came to be - maybe the only day we can all agree on. It’s also a hopeful meditation on the history and power of gratitude itself - and a reminder that giving thanks can heal us in times of strife and division. We should all give thanks to Kiernan for rescuing this slice of Americana.”—Neal Thompson, author of A Curious Man and Driving With the Devil

“Denise Kiernan is such a gifted writer, and her storytelling prowess is on full display in We Gather Together—an unputdownable American tale that could not be more timely.”—Gilbert King, Pulitzer prize-winning author of Devil in the Grove

"This compelling read about one woman’s heartfelt campaign to create a holiday includes history —  flattering and not —  of America, the women’s movement, and more. Give this as a gift to any host or curl up over the weekend and read it yourself."—Zibby Owens on KatieCouric.com

“Doubtless, though, she’d [Sarah Josepha Hale] have been thrilled by Ms. Kiernan’s tribute to her and thanksgivings, great and small, religious and secular, civic and personal. For she would understand that whether this year’s Thanksgiving takes place in person with family or in front of a computer, gratitude can surely bring grace, even in troubled times.”—Wall Street Journal

"Packed with vivid character sketches, intriguing historical tidbits, and lucid meditations on the psychology of giving thanks, this unique chronicle casts [Thanksgiving] in a new light."—Publishers Weekly

“With engaging writing and fresh research, everything comes together in a thoroughly enjoyable package.  Readers will find humor (Kiernan's take on turducken: "a poultry nesting doll with gravy"), pathos (public events were canceled during the 1918 flu pandemic), and surprises (Pilgrims weren't connected to the holiday until 1939, when FDR attempted to change the date). Lots to consider, especially with Thanksgiving just around the corner.”—Booklist (starred review)

“Kiernan traces the history of the formalization of Thanksgiving Day while reframing the holiday’s sense of gratitude… [and] engagingly explores the economic, political, and cultural roots and consequences of holiday practice… a bright tribute to Thanksgiving’s expression of gratitude and grace.”—Kirkus Reviews

“This is the book you've been wanting since summer — one that calms your soul, invigorates your mind, and helps to heal this year's bruises. Get We Gather Together and see if your hands and heart aren't full.”—The Bookworm Sez

"In We Gather Together, Denise Kiernan (The Girls of Atomic City) presents both the story of Thanksgiving, chock-full of historic tidbits, and well-documented support for the benefits of gratitude….. Kiernan hopes Hale's vision—to 'exhibit the best of ourselves'—will thrive, through 'appreciation. Inclusion. Compassion. Celebration. Charity.'"—Shelf Awareness

“We Gather Together continues Kiernan’s hot streak of keen-eyed, deeply researched, and engagingly written books that crack open little-known but intriguing chapters of history… Kiernan uses [Sarah Josepha Hale’s] extraordinary woman’s life and legacy to explore and celebrate concepts of gratitude as they evolved in both US and world history.”—WNC Magazine