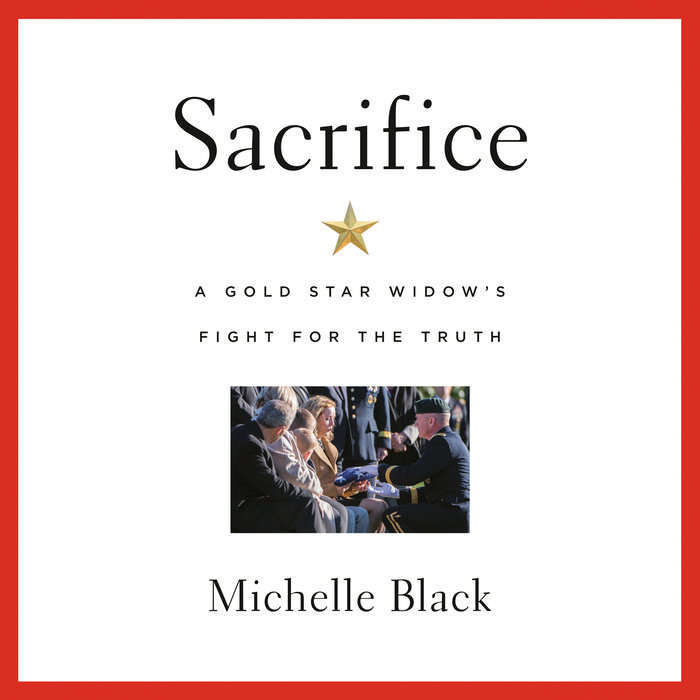 Written by: Michelle Black
Read by: Brittany Pressley
10 Hours and 34 Minutes Imprint: Penguin Audio Genre: Biography & Autobiography - Personal Memoirs Release Date: May 04, 2021
The shocking and affecting memoir from a gold-star widow searching for the truth behind her Green Beret husband's death, this book bears witness to the true sacrifices made by military families.

When Green Beret Bryan Black was killed in an ambush in Niger in 2017, his wife Michelle saw her worst nightmare become a reality. She was left alone with her grief and with two young sons to raise. But what followed Bryan's death was an even more difficult journey for the young widow. After receiving very few details about the attack that took her husband's life, it was up to Michelle to find answers. It became her mission to learn the truth about that day in Niger--and Sacrifice is the result of that mission.

In this heartbreaking and revelatory memoir, Michelle uses exclusive interviews with the survivors of her husband's unit, research into the military leadership and accountability, and her own unique vantage point as a gold-star widow to tell a previously unknown story. Sacrifice is both an honest, emotional look inside a military marriage and a searing investigation of the people and decisions at the heart of the US military.
Read More
“A heartbreaking minute-by minute-composite of miscommunication, deception, bravery, and heroism… A compelling, heartrending story of ultimate sacrifice.”--Booklist (starred review)

“Black’s story is important for what it reveals about corruption at the highest levels of the military and how that corruption can result in the needless sacrifice of soldiers’ lives…[A] courageous and heartfelt military memoir from the perspective of a soldier’s family.”--Kirkus Reviews

“Black’s narrative hauntingly encapsulates her grief…Her book’s detailed research, based on new reporting and military memos, is one of the most complete accounts of the events of that fateful day…Black’s recollections on grief are especially poignant.”--Library Journal

“I know first-hand that every military family makes sacrifices—and sometimes the ultimate one. But each of those families also deserves the truth of what happened to their loved one. Michelle Black’s fight for that truth is an inspiration, an act of remarkable persistence and genuine patriotism, and Sacrifice is a heart-rending and eye-opening read.”—Khizr Khan, Gold Star Father and author of An American Family

“Sacrifice is the harrowing account of a military wife’s search for the truth following the death of her husband on a special forces mission gone horribly wrong. Michelle Black writes with courage that seems etched onto her heart.”—Evan Wright, author of Generation Kill