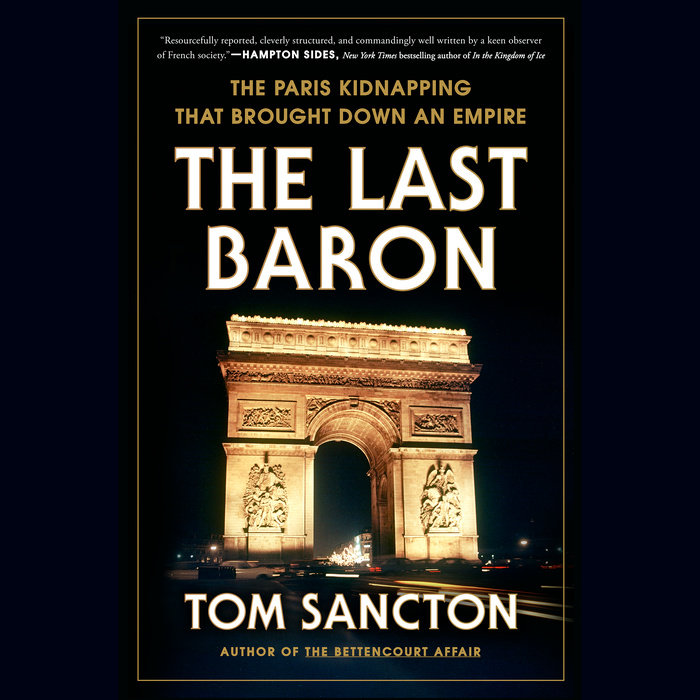 Written by: Tom Sancton
Read by: Arthur Morey
9 Hours and 34 Minutes Imprint: Penguin Audio Genre: History - Europe - France Release Date: April 05, 2022
A riveting, on-the-edge-of-your-seat tale about the notorious 1978 kidnapping of Baron Édouard-Jean “Wado” Empain, intertwined with the story of his famous grandfather, the first baron and builder of the Paris Métro. A multigenerational saga told against the backdrops of both Belle Époque and 1970s high-fashion Paris.

What does it take to create a dynasty? What does it take to keep one going? And what does it take to save the life of the dazzling but flawed man who inherited it all? Launched in the 1880s by the first baron, the Empain industrial empire spread from Belgium and France to span more than a dozen countries. When Wado took over, he further expanded the company, became a key player in France’s nuclear sector, and, by the mid-1970s, was one of the country’s most powerful business leaders—a self-described “master of the universe.” But these were also the “years of lead,” marked by a rash of high-profile kidnappings around the globe, including the headline-grabbing seizure of American heiress Patty Hearst.

Wado’s vertiginous rise caught the eye of Alain Cailloll, a small-time gangster who had grown up in a wealthy family before embracing a life of crime. On January 23, 1978, Caillol and his confederates snatched the baron off the Paris streets, sure that they’d get the 80 million francs they demanded in ransom. To show they meant business, they chopped off Wado’s little finger and warned that more body parts would follow.

But nothing unfolded as the kidnappers, or Wado himself, expected. Would Empain’s company pay? Could his family afford this astronomical sum? How much was the life of a leader, a father, and a husband worth? Most important, could a determined police chief and his crack investigators outsmart the kidnappers? The answers to those questions unspooled over two months in a tangle of events leading to a bloody showdown whose consequences would prove fatal to the Empain dynasty.
Read More
“The Last Baron is a book about the flash points in family, business, politics and diplomacy. At the same time, much of the narrative amounts to an expertly told and richly detailed police procedural. Above all, it is a wholly authentic thriller. ”
—Washington Post

“The Last Baron is much more than a cops-and-robbers escapade…it is a psychological study of social class…Atmospheric, immaculately plotted, cinematic …The Last Baron tantalizes…”
—Wall Street Journal

“Author Tom Sancton…plots out the shocking details of the crime and describes how it brought down one of France's most prominent business dynasties.”
—Town & Country

“Riveting… Sancton’s skill is to bring Empain’s kidnapping and its tragic aftermath, whereby he felt abandoned by his family and associates after he was finally released by his thwarted kidnappers, back into vivid focus.”
—AirMail

"...Tom Sancton delivers a bewitching true-crime yarn of wealth, class, menace, and intrigue, conveyed in a Rashomon-like fashion...Like Sancton’s last book, The Bettencourt Affair (adapted from his impeccable reportage for Vanity Fair on a bizarre high-society trial), The Last Baron seems destined for the cinema screen. This is a must-read for crime bugs, political buffs, and Francophiles alike." —Vanity Fair

"In this sleek, two-track narrative, we see the power and promise of one of Europe's mightiest industrial dynasties—and then in stark and sometimes horrifying detail, we learn how quickly that world can unravel. Resourcefully reported, cleverly structured, and commandingly well-written by a keen observer of French society, The Last Baron offers a neat illustration, with certain Gallic twists, of that hoary aphorism: The bigger they come, the harder they fall."
—Hampton Sides, New York Times bestselling author of In the Kingdom of Ice

“The problem with The Last Baron is that it is very difficult to stop reading once you start. Somehow the book merges a taut, noirish crime caper told in 360-degree panorama with several layers of  France’s political, economic, and cultural history beneath. Sancton belongs to that impressive pantheon of American writers whose work has benefited from an immersion in Paris.”
—Thomas Beller, author of J.D. Salinger: The Escape Artist

“Gripping from the first page, Tom Sancton tells a deeply researched and propulsive story of one of France's most notorious crimes—a tale of deception, scandal, greed, and redemption. The Last Baron is the kind of page-turner that will stay with you long after it's over.”
—Daniel Stone, author of The Food Explorer: The True Adventures of the Globe-Trotting Botanist Who Transformed What America Eats

“Perfectly reported, The Last Baron rivets the reader’s attention with its you-are-there narrative of the kidnapping that seized the headlines in 1978. It also delivers keen insights into French politics and society as well as exploring a colorful family history that spanned two centuries and three continents, from the streets of Paris to the sands of Egypt and the jungles of the Congo.”
—Nicholas Reynolds, author of Writer, Sailor, Soldier, Spy: Ernest Hemingway's Secret Adventures, 1935-1961

“An engrossing read about a multi-generational family dynasty and the lives they lived… an immensely readable, impeccably written, and thoroughly researched tale of a kidnapping gone wrong. Ideal for readers who enjoy biography, social, political, and cultural history.”
—Library Journal (starred review)

“Sancton’s briskly paced narrative moves smoothly through three generations of family history, a complex crime plot, and a century’s worth of social and political background. ‘You are there’ word pictures set the scene and capture character... It is a classic tale.”
—Booklist

"An entertaining, well-researched tale of a late-20th-century scandal.”
—Kirkus