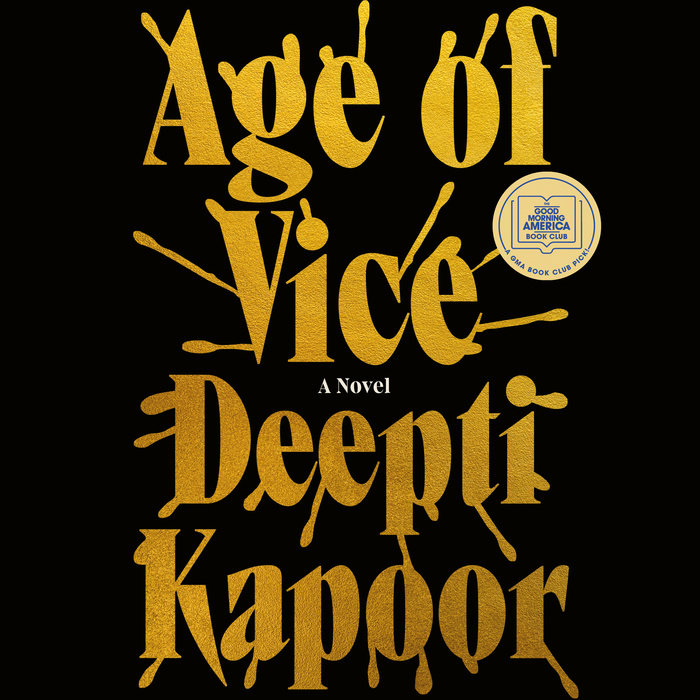 “Dazzling...Finally free from the book’s grip, now all I want to do is get others hooked.”— The Washington Post

“Cinematic…A luxe thriller…As a storyteller, Kapoor is a natural.”-- The New York Times

"Sensationally good — huge, epic, immersive and absorbing ... certain to be a book of the year." —Lee Child

This is the age of vice, where money, pleasure, and power are everything,
and the family ties that bind can also kill.

New Delhi, 3 a.m. A speeding Mercedes jumps the curb and in the blink of an eye, five people are dead. It’s a rich man’s car, but when the dust settles there is no rich man at all, just a shell-shocked servant who cannot explain the strange series of events that led to this crime. Nor can he foresee the dark drama that is about to unfold.

Deftly shifting through time and perspective in contemporary India, Age of Vice is an epic, action-packed story propelled by the seductive wealth, startling corruption, and bloodthirsty violence of the Wadia family -- loved by some, loathed by others, feared by all.

In the shadow of lavish estates, extravagant parties, predatory business deals and calculated political influence, three lives become dangerously intertwined: Ajay is the watchful servant, born into poverty, who rises through the family’s ranks. Sunny is the playboy heir who dreams of outshining his father, whatever the cost. And Neda is the curious journalist caught between morality and desire. Against a sweeping plot fueled by loss, pleasure, greed, yearning, violence and revenge, will these characters’ connections become a path to escape, or a trigger of further destruction?

Equal parts crime thriller and family saga, transporting readers from the dusty villages of Uttar Pradesh to the urban energy of New Delhi, Age of Vice is an intoxicating novel of gangsters and lovers, false friendships, forbidden romance, and the consequences of corruption. It is binge-worthy entertainment at its literary best.
Read More
Praise for Age of Vice:

“Questions of guilt, complicity, idealism and disillusion arise as the story moves into the glamorous milieu of penthouse apartments and fortified rural compounds… Ms. Kapoor effortlessly changes settings from Delhi markets to prisons to remote forests on the Nepalese border to the beaches of Goa, and she’s equally comfortable writing about servants, politicians and assassins…Recommended.”—Wall Street Journal

“Dazzling...For days, I was torn between gorging on Age of Vice or rationing out the chapters to make them last. Finally free from the book’s grip, now all I want to do is get others hooked…. This is a rare case of a book bounding as high as its hype.” —Ron Charles, The Washington Post

“A luxe thriller, set in New Delhi, that rides the line between commercial and literary fiction so adroitly ...The book has echoes of Mario Puzo’s “The Godfather,” in terms of its mobbed-up apex predators, and Vikas Swarup’s “Q & A,” the 2005 novel that was the basis for Danny Boyle’s film “Slumdog Millionaire....It’s easy to see why attention has been paid. As a storyteller, Kapoor is a natural. ”—The New York Times

“A complex mandala of a novel, Age of Vice contains stories within stories…Kapoor’s writing is muscular, pithy and highly visual, and the sort fans have come to expect from crime heavyweights like Vikram Chandra and Suketu Mehta, but her sensibility— watchful, probing, contemplative—remains uniquely her own.”—Chicago Review of Books

"Impossible to put down; Kapoor is the real thing." —Library Journal, STARRED review

“Riveting…Kapoor paints a mesmerizing picture of violence and decadence, of struggle and hope, of corruption and redemption…[I]mpossible to put down.”—BookPage, STARRED review

“Kapoor spins a dizzying ride. Weaving the backstories of Ajay, Neha, and Sunny together, Kapoor's frenetic and colorful novel highlights the new global pecking order… But as this gripping tale shows, even the weakest deserve one last gasp of dignity.” —Booklist, STARRED review

“Deeply addictive; this spellbinder would be easy to devour in one big gulp, but it’s worth savoring for Neda’s uncompromising take on what she terms India’s 'losing age, the age of vice.' The author possesses a talent great enough to match the massive scope of her subject.” —Publishers Weekly, STARRED review

“A complex, gasp-inducing drama that accelerates to an explosive ending. Block out some time: You won't be able to put this one down.” —GoodHousekeeping

“It doesn’t take long for the reader to become invested in the Mario Puzo–esque drama of the Wadia family and their associates…A whole lot of fun.” —Kirkus

“This is a masterpiece. Age of Vice is epic but intimate, its glittering, sharp scenes building into an astonishing geometry. It is an unforgettable story of corruption and excess, of ruthless power and the will to fight back.”—Flynn Berry, New York Times bestselling author of Northern Spy