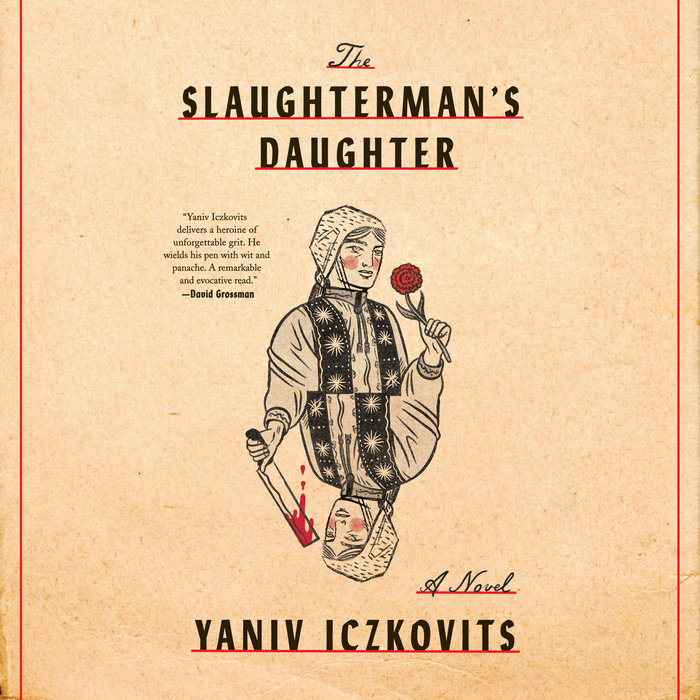 Written by: Yaniv Iczkovits
Read by: Tovah Feldshuh
17 Hours and 54 Minutes Imprint: Random House Audio Genre: Fiction - Literary Release Date: February 23, 2021
"If the Coen brothers ever ventured beyond the United States for their films, they would find ample material in this novel."
--The New York Times Book Review

"Occasionally a book comes along so fresh, strange, and original that it seems peerless, utterly unprecedented. This is one of those books."
—Kirkus Reviews (starred review)

An irresistible, picaresque tale of two Jewish sisters in late-nineteenth-century Russia, The Slaughterman’s Daughter is filled with “boundless imagination and a vibrant style” (David Grossman).

With her reputation as a vilde chaya (wild animal), Fanny Keismann isn’t like the other women in her shtetl in the Pale of Settlement—certainly not her obedient and anxiety-ridden sister, Mende, whose “philosopher” of a husband, Zvi-Meir, has run off to Minsk, abandoning her and their two children.

As a young girl, Fanny felt an inexorable pull toward her father’s profession of ritual slaughterer and, under his reluctant guidance, became a master with a knife. And though she long ago gave up that unsuitable profession—she’s now the wife of a cheesemaker and a mother of five—Fanny still keeps the knife tied to her right leg. Which might come in handy when, heedless of the dangers facing a Jewish woman traveling alone in czarist Russia, she sets off to track down Zvi-Meir and bring him home, with the help of the mute and mysterious ferryman Zizek Breshov, an ex-soldier with his own sensational past.

Yaniv Iczkovits spins a family drama into a far-reaching comedy of errors that will pit the czar’s army against the Russian secret police and threaten the very foundations of the Russian Empire. The Slaughterman’s Daughter is a rollicking and unforgettable work of fiction.

“A story of great beauty and surprise. A necessary antidote for our times.”
—Gary Shteyngart

“With boundless imagination and a vibrant style, Iczkovits delivers a heroine of unforgettable grit. He wields his pen with wit and panache. A remarkable and evocative read.”
—David Grossman

“Technicolor characters, echoes of Yiddish & Russian literature, dark humor, a feminist heroine, a rich evocation of a vanished world and sly commentary on relations between Jews and gentiles—from a brilliant shortlist, this superb novel was a worthy winner.” —A. D. Miller, Wingate Literary Prize judge

“Iczkovits explores the richness, complexity, and constant peril of Jewish life under the Russian Empire. [Fanny and Zizek] are convincingly drawn, particularly in their occasional doubts and irrationality, and as their stories unfold we observe that although lives are often shaped by history and circumstance, character and resolve can resist and transcend the status quo . . . It’s a genuine pleasure to see all of the different strands of the story come together in the final act. If the Coen brothers ever ventured beyond the United States for their films, they would find ample material in this novel . . . An ultimately hopeful search for small comforts and a modicum of justice in an absurd and immoral world.”
—Shay K. Azoulay, The New York Times Book Review

“Delightful . . . Technicolor characters, pathos, and humor are all wonderfully captured in a nimble translation from the Hebrew.”
—The Economist (“Our books of the year”)

“Epic in scope and rich in exe­cu­tion, The Slaughterman’s Daugh­ter is a con­tem­po­rary Jew­ish mas­ter­piece . . . Tip­ping its streimel to the likes of Sholem Ale­ichem and I. L. Peretz, [it] could almost be mis­tak­en for a lost Yid­dish clas­sic. Hilar­i­ous, wise, and fre­net­ic.” —Bram Presser, Jewish Book Council

“A novel exploding with imagination and talent, and reflecting a familiarity with both the prosaic nitty-gritty that characterized life in the Jewish Pale of Settlement, and the sweeping historical forces that affected it . . . Fresh and original . . . Iczkovits [is] served by a superb translator.”
—David B. Green, Haaretz

“We were unanimous in our decision as judges that we loved this wonderful book, The Slaughterman’s Daughter. It is epic literature with an excellent translation. At the same time, it is also a fantastic, surprising romp through a really important part of Jewish history, with an amazingly unpredictable storyline . . . Funny, shocking, and entrancing.” —Rabbi Janner-Klausner, Wingate Literary Prize judge

“A uniquely impressive offering . . . The novel is at once a beautiful fable and a philosophical meditation on a people, their history, and their place in society . . . [Fanny’s] journey may have been sparked by her sister’s heartbreak, but it turns into a quest for her identity as a woman, as a mother, as a Jew, as a human being.” — Olesya Salnikova Gilmore, Washington Independent Review of Books

“Approaches history in a fabulist style reminiscent of Sholem Aleichem and his disciples . . . The folktale tradition evoked in the storytelling has an estimable history, but perhaps even more old-fashioned is this novel’s length and leisurely tempo . . . I appreciated the pace . . . Today it would be a quick drive to Minsk; once upon a time the trip was the stuff of epics.”
—Sam Sacks, The Wall Street Journal

“As fun as a literary novel about nineteenth-century Russia can get. Iczkovits possesses such a generous imagination that he makes a tale of village life into a sweeping description of Russian life.” –James Doyle, Bookmunch

“Suspenseful . . . The rich characters and vivid descriptions of Jewish and army life in those times make for an engaging novel.” —M. A. Orthofer, The Complete Review

“Compelling . . . One of its beauties is allowing us to see how one shtetl family’s marital problems end up having repercussions that will reach the highest echelons of state power . . . Orr Scharf’s translation is terrific, rendering a work of contemporary Israeli fiction with the narrative feel of a much earlier era.” —Howard Freedman, J, The Jewish News of Northern California

“Iczkovits draws on the conventions of black comedy, the picaresque, and the fable to tell the story of a quest packed with improbable characters and events [and] finds unexpected richness and strangeness in this familiar material . . . As in ‘Fiddler on the Roof,’ small disasters foretell the destruction of a world.” —Julia M. Klein, The Forward

“Occasionally a book comes along so fresh, strange, and original that it seems peerless, utterly unprecedented. This is one of those books. You might hear traces of Gogol or Isaac Babel in Iczkovits’ voice, but they’re only traces . . . Iczkovits is a superb talent, and this novel is a resounding success. As witty as it is wise, [The Slaughterman’s Daughter] is a profoundly moving caper through the Russian empire.”
—Kirkus Reviews (starred review)

“Iczkovits elevates this cat-and-mouse story into a sweeping narrative with trips down side roads that reveal the riveting backstories of major and minor characters. His observations about human nature, family dynamics, and the interplay between religion and politics come across as wise but never didactic. Ever entertaining, Iczkovits’s lively, transportive picaresque takes readers on a memorable ride.”
—Publishers Weekly

“Full of fascinating historical detail. Iczkovits has done his research. But, best of all, is the writing. He is a born storyteller. The novel is packed with terrific characters . . . This is a book you will not want to put down. It’s full of energy, part farce, part adventure story. Iczkovits is clearly a talent to watch and The Slaughterman’s Daughter is the place to start.”
—David Herman, The Jewish Chronicle

“A bona fide masterpiece that is a sheer delight. Shot through with black humor and rich prose . . . By far the most unexpectedly entertaining and enjoyable book I read this year . . . An epic adventure in the spirit of Gogol . . . Encounters with madmen, bandits, and the Russian army serve to enhance what turns out to be a journey of near legendary proportions . . . Outrageously funny.” ”
—Noel Megahey, The Digital Fix

“A miraculous patchwork quilt of individual stories within stories told by different voices, [the] quest for justice is the master story: a feminist picaresque set in a landscape of visionary and intimate historical and physical detail.”
—George Szirtes

“Combine a thriller with a road story, throw in a page-turning adventure, a few fables, some ethical speculation, a Bildungsroman, and more than one love story, and you get this epic tale. It’s witty, wise, exciting, intriguing, sorrowful, joyous, and tender. Full of surprise, understanding, historic sweep, and more than a few murders, The Slaughterman’s Daughter keeps you deliciously poised on a keen and beguiling fictional knife-edge.”
—Gary Barwin

“An original take on the historical novel that recreates—with a shrewd but affectionate look back at a lost world—Jewish life in the Russian empire at the end of the nineteenth century. [C]haracterized by historical realism but also an element of fantasy, it is also worth noting the novel’s brilliant insights and its winning humor. A novel of unquestionable uniqueness.”
—Judges’ Committee, The Agnon Prize
Read More