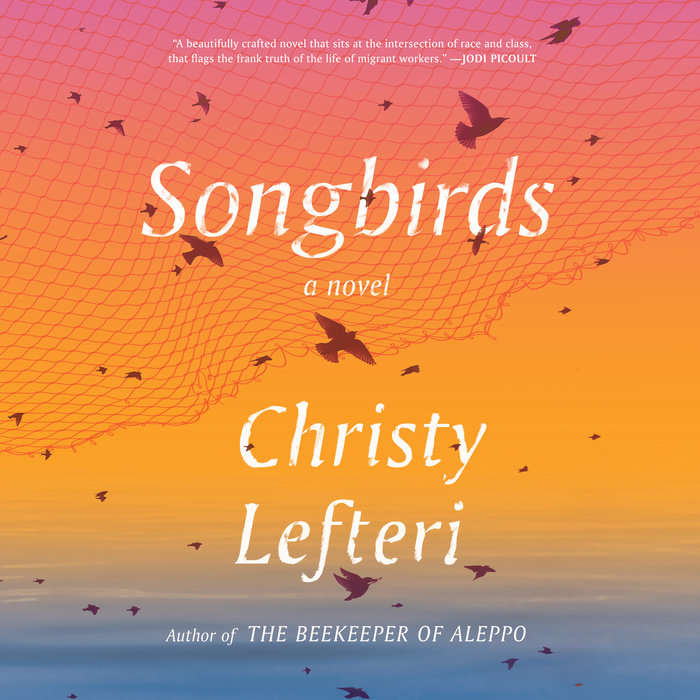 Written by: Christy Lefteri
Read by: George Georgiou, Indira Varma, Art Malik & Lolita Chakrabarti
9 Hours and 20 Minutes Imprint: Random House Audio Genre: Fiction - Cultural Heritage Release Date: August 03, 2021
“A beautifully crafted novel that sits at the intersection of race and class, that flags the frank truth of the life of migrant workers for whom a flight to freedom can become the most finely woven trap.”—JODI PICOULT, #1 New York Times bestselling author of The Book of Two Ways

From the prize-winning author of The Beekeeper of Aleppo comes Songbirds, a stunning novel about the disappearance of a Sri Lankan domestic worker and how the most vulnerable people find their voices.

Living on the island of Cyprus, Nisha is far from her native Sri Lanka. Though she longs to return home, she knows that working as a “maid” for a wealthy widow is the only way to earn enough to support her daughter, left behind to be raised by relatives.

Yiannis is a poacher, trapping the tiny protected songbirds that stop in Cyprus as they migrate each year from Africa to Europe and selling them on the illegal market. He dreams of finding a new way of life, and of marrying Nisha.

But one night, Nisha makes dinner, an aromatic dahl curry, for the family who pays her: Petra and her daughter Aliki. Then, after she cleans the kitchen and tucks Aliki into bed, Nisha goes out on a mysterious errand, and vanishes.

When the police refuse to pursue the case, Petra takes on the investigation herself, a path that leads her to Nisha’s friends—other workers in the neighborhood—and to the darker side of a migrant’s life, where impossible choices leave them vulnerable, captive, and worse.

Inspired by the real-life disappearance of domestic workers in Cyprus, Christy Lefteri has crafted a poignant, deeply empathetic narrative of the human stories behind the headlines. With infinite tenderness and skill, Songbirds offers a triumphant story of the fight for truth and justice, and of women reclaiming their lost voices.
Read More
“In this heartfelt novel by the author of The Beekeeper of Aleppo, a Sri Lankan domestic worker goes missing from her employer’s home in Cyprus, and the widowed homeowner herself sets out to find her after the police show no interest.”—The New York Times (New and Noteworthy)

“Lefteri deftly weaves Yiannis’s pain at the loss of his love with Petra’s growing realizations about her own culture and Aliki’s attachment to her missing caretaker. Songbirds is quietly urgent in its treatment of Nicosia’s maids, thoughtful, compassionate and lyrical in its descriptions. Set in the old capital city of Cyprus, this is a beautiful, sad novel about human relationships and hard choices, who is seen and unseen.”—Shelf Awareness (starred review)

“I loved this tender, moving story about the powerful chord that binds mothers to daughters, about those we fail to see and protect. The humanity in Songbirds is compelling, tinged with sadness, delicately delivered with urgency. I finished this book and could not stop thinking about Nisha. It is stunning and beautiful, a magnificent achievement.”—Abi Daré, author of The Girl with the Louding Voice

“Like the vulnerable songbirds trapped in mist nets, Christy Lefteri’s characters—women who leave foreign lands to work abroad and send money back home—broke my heart and kept me turning the pages of her gorgeous novel well into the night.”—Alka Joshi, author of The Henna Artist and The Secret Keeper of Jaipur

“A beautiful novel . . . Songbirds will break your heart and open your eyes.”—Heather Morris, author of The Tattooist of Auschwitz

“This thought-provoking novel of love, loss, and redemption is thoroughly sublime.”—Caroline Montague, author of An Italian Affair

“Lefteri is an astonishing weaver of stories that speak to the world with humor and compassion. She is imaginatively daring as she is socially responsible in a style that sustains a compelling narrative from start to end and that kept me on the edge.”—Daljit Nagra, author of British Museum

“An aura of menace pervades this unflinching tale of loss and devotion.”—Booklist