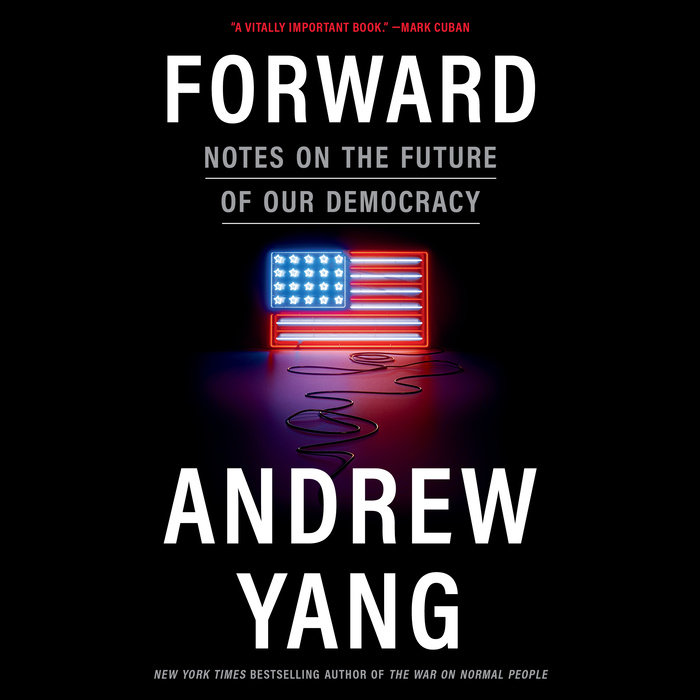 Written by: Andrew Yang
Read by: Andrew Yang
9 Hours and 18 Minutes Imprint: Random House Audio Genre: Biography & Autobiography - Political Release Date: October 05, 2021
NATIONAL BESTSELLER • A lively and bold blueprint for moving beyond the “era of institutional failure” by transforming our outmoded political and economic systems to be resilient to twenty-first-century problems, from the popular entrepreneur, bestselling author, and political truth-teller

Despite being written off by the media, Andrew Yang’s shoestring 2020 presidential campaign—powered by his proposal for a universal basic income of $1,000 a month for all Americans—jolted the political establishment, growing into a massive, diverse movement.

In Forward, Yang reveals that UBI and the threat of job automation are only the beginning, diagnosing how a series of cascading problems within our antiquated systems keeps us stuck in the past—imperiling our democracy at every level. With America’s stagnant institutions failing to keep pace with technological change, we grow more polarized as tech platforms supplant our will while feasting on our data. Yang introduces us to the various “priests of the decline” of America, including politicians whose incentives have become divorced from the people they supposedly serve.

The machinery of American democracy is failing, Yang argues, and we need bold new ideas to rewire it for twenty-first-century problems. Inspired by his experience running for office and as an entrepreneur, and by ideas drawn from leading thinkers, Yang offers a series of solutions, including data rights, ranked-choice voting, and fact-based governance empowered by modern technology, writing that “there is no cavalry”—it’s up to us. This is a powerful and urgent warning that we must step back from the brink and plot a new way forward for our democracy.
Read More
“Andrew Yang surged to popularity in 2020 because he saw—like none of the other presidential candidates—that our problems came from the complex interactions of democracy, economics, and technology. In this important book, he explains how these three domains interact and he proposes solutions that, when combined, would lead us forward to human-centered capitalism and a vibrant, just, and prosperous democracy.”—Jonathan Haidt

“Can there be another political party in the U.S.? Can we find a way past toxic partisanship to a fact-based government? In Forward, Yang does not just give us a laundry list of intractable problems, but shows how we can find solutions if we think in new ways and summon the courage to do so.”—Kara Swisher

“Forward is a vitally important book that shows how entrepreneurial, independent thinking will be the indispensable ingredient to solving our biggest political and economic challenges.”—Mark Cuban

“It’s no wonder that ever since Yang burst onto the scene with a positive movement that spoke directly to the pain Americans are feeling, both parties have been taking his ideas. With Forward, Yang once again proves he is a necessary and powerful voice.”—Van Jones

“A powerful and compelling, beautifully written story of an American’s dream for a better America—with a clear account of how to get there.”—Lawrence Lessig

“Despite being ignored and written off by mainstream media, no 2020 candidate had more of an impact in changing our political conversation than Andrew Yang.”—Krystal Ball

“Yang is the most original thinker in the political scene.”—Scott Galloway