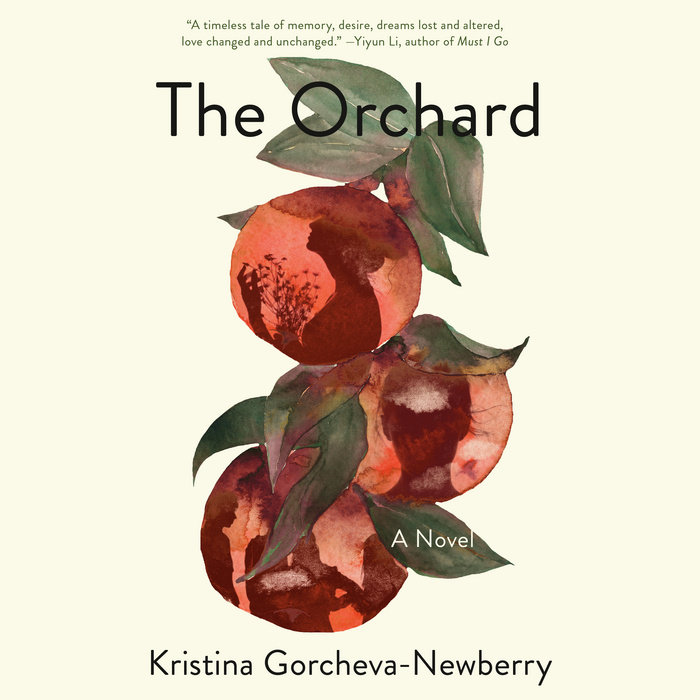 Written by: Kristina Gorcheva-Newberry
Read by: Julia Emelin & Kristina Gorcheva-Newberry
11 Hours and 37 Minutes Imprint: Random House Audio Genre: Fiction - Women Release Date: March 15, 2022
Four teenagers grow inseparable in the last days of the Soviet Union—but not all of them will live to see the new world arrive in this powerful debut novel, loosely based on Anton Chekhov’s The Cherry Orchard.

ONE OF THE BEST BOOKS OF THE YEAR: New York Post

Coming of age in the USSR in the 1980s, best friends Anya and Milka try to envision a free and joyful future for themselves. They spend their summers at Anya’s dacha just outside of Moscow, lazing in the apple orchard, listening to Queen songs, and fantasizing about trips abroad and the lives of American teenagers. Meanwhile, Anya’s parents talk about World War II, the Blockade, and the hardships they have endured.

By the time Anya and Milka are fifteen, the Soviet Empire is on the verge of collapse. They pair up with classmates Trifonov and Lopatin, and the four friends share secrets and desires, argue about history and politics, and discuss forbidden books. But the world is changing, and the fleeting time they have together is cut short by a sudden tragedy.

Years later, Anya returns to Russia from America, where she has chosen a different kind of life, far from her family and childhood friends. When she meets Lopatin again, he is a smug businessman who wants to buy her parents’ dacha and cut down the apple orchard. Haunted by the ghosts of her youth, Anya comes to the stark realization that memory does not fade or disappear; rather, it moves us across time, connecting our past to our future, joys to sorrows.

Inspired by Anton Chekhov’s The Cherry Orchard, Kristina Gorcheva-Newberry’s The Orchard powerfully captures the lives of four Soviet teenagers who are about to lose their country and one another, and who struggle to survive, to save their friendship, to recover all that has been lost.
Read More
“[A] stunning debut . . . . Gorcheva-Newberry pulls off a tragic and nostalgic love letter to a much-tried generation. This is a winner.”—Publishers Weekly (starred review)

“Gorcheva-Newberry does the reader a great service, offering a peek behind the Iron Curtain and its veil of propaganda . . . . If there is such a thing as clear-eyed sentimentality, The Orchard evokes it, with its warts-and-all recollections of youthful passions, when the road ahead seems like one endless string of possibilities.”—BookPage (starred review)

“A magnificent story . . . Gorcheva-Newberry's novel is a tour de force regarding the indelible marks written on young lives during desperate social and political times.”—Midwest Book Review

“The Orchard is a novel that engages with the paradoxical way in which youth opens one up to the world and that same quality is lost within it.”—Chicago Review of Books

“Aching and sexy, clear-eyed and heartbreaking, honest and necessary. You will devour it. The Orchard is an exquisite, explosive debut.”—Julia Phillips, author of Disappearing Earth

“Charming and tragic, hopeful and disillusioned, profoundly intimate and sensitive to history. With exquisite lyricism, Kristina Gorcheva-Newberry recalls what it meant to grow up in Moscow in the 1980s.”—Ken Kalfus, author of Envy and 2 A.M. in Little America

“The Orchard is a beautiful portrayal of life lived in enormous change and upheaval; it is a novel worth of the master.”—Richard Bausch, author of Peace

“Kristina Gorcheva-Newberry brings us a timeless tale of memory, desire, dreams lost and altered, love changed and unchanged.”—Yiyun Li, author of Must I Go

“In The Orchard, Kristina Gorcheva-Newberry has given us a deeply personal coming-of-age story with unapologetic sensuality and impressive scope. . . This is a sublime novel.”—Christine Sneed, author of The Virginity of Famous Men and Paris, He Said

“The term ‘Chekovian’ gets tossed around far too freely these days, but in the case of Kristina Gorcheva-Newberry's beautiful novelistic debut, nothing less will suffice…. This novel is a gem, and its author is a major new voice in contemporary fiction.”—Steve Yarborough, author of The Unmade World

“The Orchard is extraordinary. Kristina Gorcheva-Newberry captures a generation's coming of age during Perestroika with aching empathy, and in language that is by turns transcendent and unsparing. She delivers an electrifying novel, brimming with passion, pathos, and searing insights. I literally didn't want the novel to end.”—Jennifer Cody Epstein, author of Wunderland

“Gorcheva-Newberry conveys the poignance of adolescent urgency with a poet's elliptical dash. The Orchard is a great pleasure.”—Christine Schutt, author of Pure Hollywood
Read More