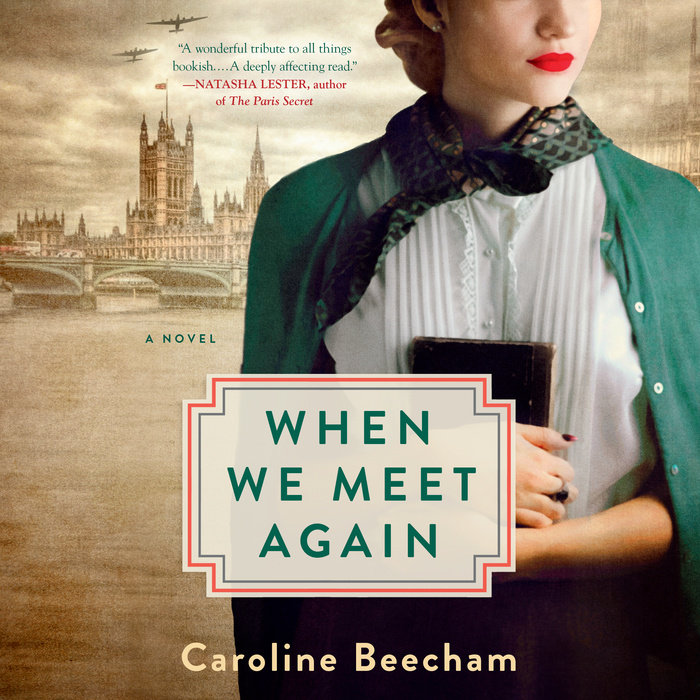 Written by: Caroline Beecham
Read by: Hannah Curtis
9 Hours and 54 Minutes Imprint: Penguin Audio Genre: Fiction - Historical - General Release Date: July 20, 2021
An emotionally compelling tale of love and mystery set in the publishing world of World War II London, When We Meet Again tells the story of a mother searching for her stolen child, and illustrates the unbreakable bonds among families, lovers, and readers under the shadow of war.

London, 1943: War and dwindling resources have taken their toll on the book publishing industry, but Alice Cotton, a young editor at Partridge Press, has seen her star begin to rise. She has a knack for creating new books to distract readers from the grim realities of the war. And the demand for books is greater than ever, both on the battlefield and on the home front. But just as her hard work seems poised to pay off, Alice unexpectedly falls pregnant.

Facing the stigma of being an unwed mother, Alice flees to a small town to give birth to her child, Eadie, whom her family has promised to help raise. Instead, her mother sells the newborn to "baby farmers" who plan to give the child up for a private adoption. Alice begins her desperate hunt to find the daughter she never planned for but suddenly deeply loves.

Alice's story intertwines with that of Theo Bloom, an American editor tasked with helping Partridge Press overcome the publishing obstacles of the war. Theo and Alice are quickly drawn to each other during their darkest hours, bound by hope, love, secrets, and the belief that books have the power to change lives.
Read More
“Books about the power of stories to bring people together and nourish their spirits are my favorite kind. So it was with much joy that I read When We Meet Again, a wonderful tribute to all things bookish. But it is also a compelling exploration of a heartbreaking and little known aspect of wartime life. The research, compassion and sensitivity poured into novel are admirable and make for a deeply affecting reading experience.” --Natasha Lester, New York Times bestselling author of The Paris Secret

“[A] deeply compelling wartime tale of love and mystery.”--Woman's World

“Beecham pulls off a thrilling conclusion and elevates the story with some well-researched context on the publishing industry during the war, when demand for books was high. Fans of sentimental WWII fiction will fly through this.”--Publishers Weekly

“Character-driven with the impending doom of war looming, When We Meet Again delivers a softly paced mystery with a dash of hope and romance to keep readers rooting for Alice when outlooks look dim.”--Booklist

“Movingly rendered. . . The characters are likeable [and] the charms of daily life in 1943 London, seen through the kindhearted Theo’s eyes, make up for any weaknesses in realism. The unusual subject of baby-farming makes this well-told story stand out.”--Historical Novel Review

“A compelling story of a determined young woman and her quest for justice set against the fascinating world of publishing--and even a zoo--during World War II.”—Rhys Bowen, New York Times bestselling author of The Tuscan Child

“When We Meet Again is a poignant and absorbing novel about a young woman editor personally devastated by the historically true practice of “baby farming” during World War II-era London. Caroline Beecham’s emotional and beautifully written story is a testament to the enduring power of a mother’s love and to the power of books and stories themselves, in even our darkest times.” --Jillian Cantor, USA Today bestselling author of In Another Time and Half Life

“"By turns heart-pounding and heart-tugging, When We Meet Again is a dramatic story of baby farming in WWII-era London. Following a mother searching for her stolen daughter, Caroline Beecham's writing, rich with historical detail and filled to the brim with emotion, will pull readers in from the very first page." --Molly Greeley, author of The Clergyman's Wife and The Heiress

An evocative and heart-warming story that reminds us of everything that is important.”--Belinda Alexandra, author of The Invitation and The Mysterious Woman
Read More