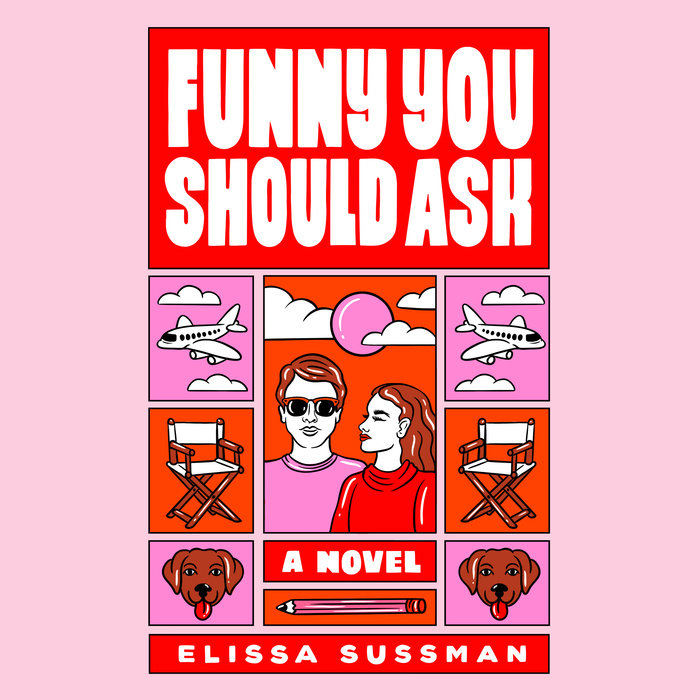 Written by: Elissa Sussman
Read by: Kristen Sieh
7 Hours and 53 Minutes Imprint: Random House Audio Genre: Fiction - Women Release Date: April 12, 2022
A restless young journalist with big dreams interviews a Hollywood heartthrob—and reunites with him ten years later to discover exactly how he feels about her in this sexy and engrossing novel

“You will absolutely devour this book. It’s filled with delightful banter, hot romance, and a love story that’s worthy of the big screen.”—Kate Spencer, author of In a New York Minute and host of Forever35

Then. Twenty-something writer Chani Horowitz is stuck. While her former MFA classmates are nabbing high-profile book deals, all she does is churn out puff pieces. Then she’s hired to write a profile of movie star Gabe Parker: her number one celebrity crush and the latest James Bond. All Chani wants to do is keep her cool and nail the piece. But what comes next proves to be life changing in ways she never saw coming, as the interview turns into a whirlwind weekend that has the tabloids buzzing—and Chani getting closer to Gabe than she had planned.

Now. Ten years later, after a brutal divorce and a healthy dose of therapy, Chani is back in Los Angeles as a successful writer with the career of her dreams. Except that no matter what new essay collection or online editorial she’s promoting, someone always asks about The Profile. It always comes back to Gabe. So when his PR team requests that they reunite for a second interview, she wants to say no. She wants to pretend that she’s forgotten about the time they spent together. But the truth is that Chani wants to know if those seventy-two hours were as memorable to Gabe as they were to her. And so . . . she says yes.

Alternating between their first meeting and their reunion a decade later, this deliciously irresistible novel will have you hanging on until the last word.
Read More
“Funny You Should Ask is the kind of fascinating, intimate character study that feels like reading about real people. A breezy, addictive romance—I couldn’t put it down!”—Rachel Lynn Solomon, author of The Ex Talk

“Funny You Should Ask is a smart, sensitive story full of love and longing—not to mention a totally swoonworthy hero. It’s also a page-turning peek into the celebrity machine. Framed by one infamous weekend and its fallout, the book goes beyond the glossy surface to thoughtfully tackle questions of perception versus reality, and which can hurt more: the limitations other people place on us, or the ones we place on ourselves.”—Heather Cocks and Jessica Morgan, bestselling authors of The Royal We and The Heir Affair

“Elissa Sussman’s adult debut promises a glamorous celeb romp, but offers a double-whammy with thoughtful, emotional depth. As the narrative jumps back and forth in time, the truth of what happened between Gabe and Chani unfolds and a romance blooms—cautious, sweet, and sizzling with tension. . . . A beautiful, fun, heartfelt love story that I couldn’t put down.”—Maurene Goo, author of Somewhere Only We Know

“Alternating between past and present, YA writer Sussman’s first novel for adults slowly lays out the events of her characters’ first meeting and how much has changed in the decade since. The result is a sexy, sometimes emotionally fraught tale that is both funny and romantic and that will appeal to fans of Sophie Kinsella.”—Booklist, Susan Maguire

“Sussman makes her adult fiction debut with a smart and sexy tale of second-chance love. The story thoroughly satisfies on a romantic level and packs an emotional punch with genuine characters.”—Library Journal (starred review)

“Sussman’s thoughtful adult debut explores the connection forged between an insecure Los Angeles writer and a charming movie star. A decade after Chani Horowitz’s profile of Gabe Parker went viral, the two are reunited for another interview. . . . Sussman’s musings about fame, success, and the bonds between people elevate this fun and charming narrative. This has ALL THE MAKINGS OF A HIT.”—Publishers Weekly
Read More