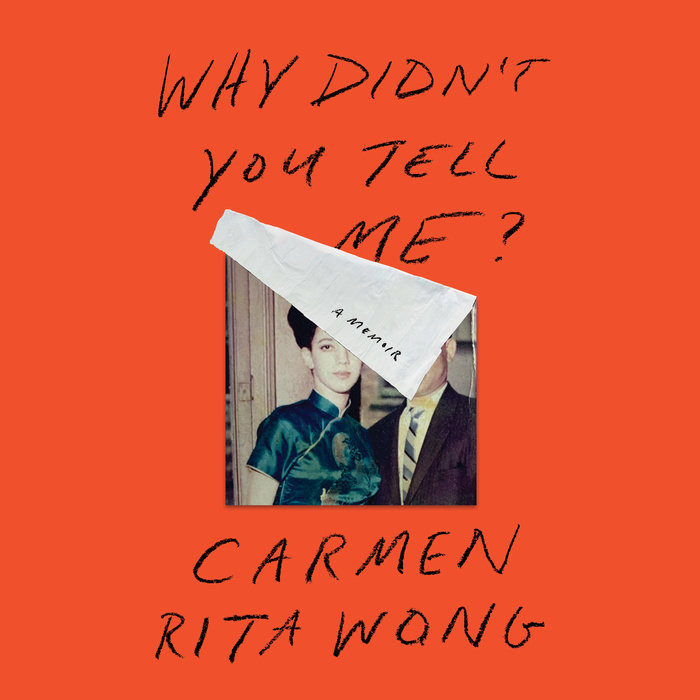 “Riveting. . . . [Wong] tells her story in vivid conversational prose that will make readers feel they’re listening to a master storyteller on a long car trip. . . . Hers is a hero’s journey.”—The New York Times Book Review

My mother carried a powerful secret. A secret that shaped my life and the lives of everyone around me in ways she could not have imagined.

Carmen Rita Wong has always craved a sense of belonging: First as a toddler in a warm room full of Black and brown Latina women, like her mother, Lupe, cheering her dancing during her childhood in Harlem. And in Chinatown, where her immigrant father, “Papi” Wong, a hustler, would show her and her older brother off in opulent restaurants decorated in red and gold. Then came the almost exclusively white playgrounds of New Hampshire after her mother married her stepfather, Marty, who seemed to be the ideal of the white American dad.

As Carmen entered this new world with her new family—Lupe and Marty quickly had four more children—her relationship with her mother became fraught with tension, suspicion, and conflict, explained only years later by the secrets her mother had kept for so long.

And when those secrets were revealed, bringing clarity to so much of Carmen’s life, it was too late for answers. When her mother passed away, Carmen wanted to shake her  soul by its shoulders and demand: Why didn’t you tell me?

A former national television host, advice columnist, and professor, Carmen searches to understand who she really is as she discovers her mother’s hidden history, facing the revelations that seep out. Why Didn’t You Tell Me? is a riveting and poignant story of Carmen’s experience of race and culture in America and how they shape who we think we are.
Read More
“Riveting. . . . [Wong] tells her story in vivid conversational prose that will make readers feel they’re listening to a master storyteller on a long car trip. . . . Hers is a hero’s journey.”—The New York Times Book Review

“A stunner about race, culture and the deeper meaning of family.”—People

“Vivid . . . a propulsive pursuit of the truth and the way it’s shaped this writer’s life.”—Literary Hub

“Carmen Rita Wong is a brilliant force. She is a master storyteller, whose voice is a gift to this world.”—Catherine Burns, artistic director of The Moth

“This is a vivid and surprising memoir, bracing and bright. Wong drives, without swerving, straight into the thicket of daughters and mothers and (a lot of) fathers; of racism and sexism and the ways in which inequity seeps into every corner of the American story. It is, among other things, an incredible story.”—Rebecca Traister, New York Times bestselling author of Good and Mad

“This is the Carmen Rita Wong I know—fierce and true. Her story broke my heart and filled it up at the same time.”—Sunny Hostin, three-time Emmy Award–winning co-host of ABC’s The View and New York Times bestselling author of I Am These Truths

“An unflinching, provocative, and deeply satisfying excavation of self . . . With a commanding voice and raw honesty, Carmen Rita Wong fearlessly digs deep beneath the weight of family secrets, the white gaze, and cultural expectations in a search for her identity. Why Didn’t You Tell Me? paints a fraught, urgent coming-of-age story that unravels the inner lives of our parents—too often suppressed by white supremacy—and shatters the stranglehold of family silence.”—Xochitl Gonzalez, New York Times bestselling author of Olga Dies Dreaming

“Carmen Rita Wong takes us on a scavenger hunt through her own intersectionality by chronicling her family and upbringing. Wong’s primary questions are: Who am I? What is my identity? What makes identity? What is family? And most important, who decides all of the above? The narrative of Why Didn’t You Tell Me? follows clues as Wong tries to understand who her real father is. In the end, the treasure is this memoir that she bravely shares with the rest of the world.”—Wendy Wasserman, Politics & Prose

“Propulsive . . . explosive . . . Packing in raw emotion, sharp cultural commentary, and plenty of intrigue, this has all the makings of a book that’s destined for the big screen. This hits the mark.”—Publishers Weekly

“[Carmen Rita Wong’s] masterful ability to bring characters to life is a key component of the lively narrative. . . . Snappy writing, unusual empathy, and an unexpectedly satisfying resolution send this memoir to the front of the pack.”—Kirkus Reviews (starred review)
Read More